US protests against Covid-19 lockdowns spread to liberal bastion California 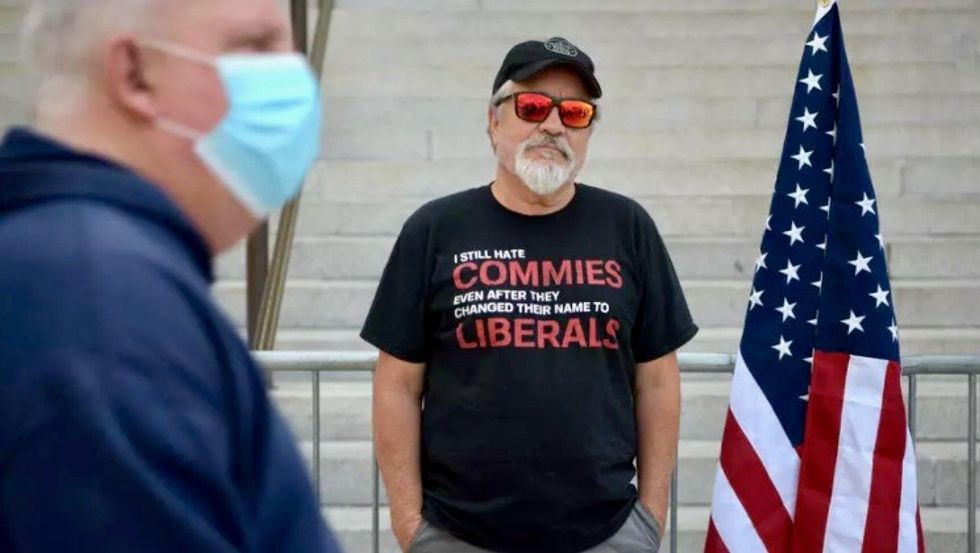 A man wearing a facemask walks past another standing with a US flag during a demonstration against stay-at-home orders near Los Angeles City Hall on May 1, 2020, amid the novel coronavirus pandemic. © Agustin Paullier, AFP

Protesters marched in several cities across California on Friday demanding the easing of restrictions due to the coronavirus outbreak and denouncing Governor Gavin Newsom's decision to shut down some beaches.

The protests were taking place in at least 11 cities, including the capital Sacramento as well as San Francisco, Los Angeles and San Diego.

Some of the demonstrators waved American flags and carried signs that read "Freedom is Essential," "Trump 2020," or "Gruesome Newsom," while voicing anger at stay-at-home rules put in place to slow the spread of the virus.

Most of the protesters, many of them chanting "Open California" and "Freedom" or ringing cowbells, did not wear face coverings or follow social distancing guidelines.

In Huntington Beach, about 35 miles (55 kilometers) south of Los Angeles, several thousand people rallied to denounce Newsom's order to shut local beaches beginning Friday in order to avoid a repeat of last weekend when crowds flocked to the shoreline.

"It was the straw that broke the camel's back," protester Monica Beilhard fumed, referring to the beach shutdown.

"It was uncalled for, unnecessary and people out here are making that known," she added. "And we're also very much saying enough is enough, we have the right to work... and it's time for the governor to allow the healthy to be able to get back to business.

Officials in Huntington Beach and nearby towns have vowed to fight the beach closure order by taking the matter to court.

"We believe the governor's order is unconstitutional, vague and ambiguous," said Huntington Beach City Attorney Michael Gates. "He doesn't have a rational basis for this. What he seeks is a remedy to something that wasn't a problem in the first place."

But a judge in Orange County, where Huntington Beach is located, late Friday refused to issue a temporary restraining order against Newsom's decision and scheduled a hearing on the matter for May 11.

In downtown Los Angeles, tensions flared as hundreds marched in front of City Hall to demand an end to the stay-at-home order as counter protesters waved signs that said "humanity first" while insisting the lockdown was necessary to save lives.

"The virus is no worse than the flu," Janet Gibson told AFP. "The sick need to stay quarantined. They need to take care of themselves. But let the healthy work. Let the healthy go out and be social."

Ali Taylor, another protester, said the lockdown went against what the United States stands for.

"We're Americans, we're free, we know how to take care of ourselves," she said. "We want our beaches and parks opened up, we want to be able to live free lives, and he (Newsom) is keeping us at home."

Newsom, who like other governors across the country is facing mounting pressure to lift restrictions, especially as the weather warms up, has vowed not to bow to pressure and insists that his actions are driven by public health concerns.

He told journalists at his Friday news conference that he empathized with protesters but urged them to continue to obey the stay-at-home order.

He also appealed to them to wear masks and practice social distancing while demonstrating.

"This disease doesn't know if you're a protester -- Democrat, Republican or if you support the election of one candidate or the ouster of another," he said. "It just knows one thing, and that is its host.

California has registered more than 50,000 cases of coronavirus so far with more than 2,100 deaths, a fatality rate deemed modest given it is the most populous state in the country with nearly 40 million people.

Nationwide, the virus has killed more than 64,000 people.