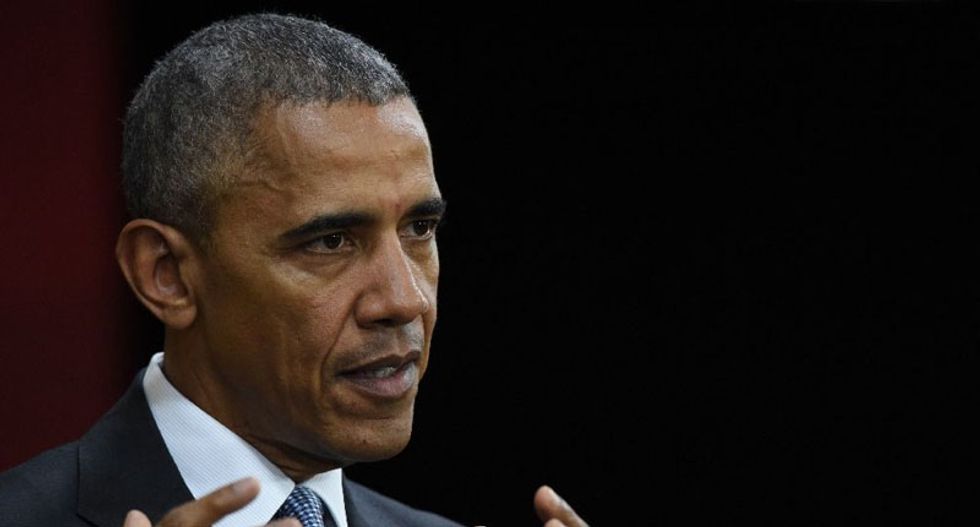 A social media post, which in April was shared widely on Facebook and made appearances on a conservative online discussion forum, asserts that former President Barack Obama signed legislation that caused companies to manufacture medical devices overseas, including items essential for the current coronavirus pandemic.

Alongside a photo of Obama, the text of the Facebook post says: “Let me be clear. I signed the medical appliance tax bill that forced companies to outsource manufacturing of masks, gowns, gloves and ventilaors [sic] to China, Europe and Russia to avoid the tax.”

The image piqued our interest because it combined a few hot-button issues. First, the concern that the U.S. is experiencing a shortage of ventilators and personal protective equipment, or PPE, like masks, gowns and gloves to help protect front-line workers from coronavirus. Second, issues related to trade imbalances and the outsourcing of American manufacturing abroad are likely to be frequent themes on the presidential campaign trail. So we decided to dig in.

Though the image did not include sourcing or sponsorship information, its target — the “medical appliance tax bill” — seemed to be a reference to the medical device tax (more formally known as the medical device excise tax) that became law as part of the Affordable Care Act. Additionally, much of the social media post tracked closely to statements made by conservative radio host Rush Limbaugh during an April 2 episode of his talk show, which included a discussion of the medical device tax.

Before we get into the specifics of the medical device tax, two critical elements of the post must be addressed. First, did Obama ever say anything like what the viral image claims? We checked with Eric Schultz, a senior adviser to the former president. In an email he replied: “President Obama obviously didn’t say this!”

A key piece of evidence that supports Schultz’s statement is the use of the term “medical appliance device tax bill.”

Bottom line: We couldn’t find any other reference — either official or unofficial — to a piece of federal legislation bearing this name or nickname. And, though the experts we spoke with agreed the social media post was likely directed at the device tax included in the ACA, none had ever heard it referred to by that moniker — a point that adds more skepticism to the image’s claim.

And What Is The Medical Device Tax?

In order to pay for the ACA’s expansion of health coverage, taxes were increased for various industries — including the medical device industry — that would benefit from more people getting health insurance. The tax was controversial and triggered considerable pushback.

The measure set a 2.3% excise tax on medical devices, sold in the United States beginning in January 2013. The tax applied to both domestic manufacturers and importers of medical devices.

But, it did not apply to items made in the U.S. for foreign export, said John McDonough, a professor at the Harvard T.H. Chan School of Public Health who also served as a senior adviser during the Obama administration and helped write the Affordable Care Act.

“The tax was designed deliberately” to avoid forcing manufacturers to move their production overseas, McDonough wrote in an email.

Opponents of the tax argued that it was a severe financial burden on medical device manufacturers. They also estimated that it would have resulted in the loss of more than 20,000 full-time domestic jobs in the industry.

Joseph Antos, a health policy scholar with the American Enterprise Institute, said that the tax was punishing on the medical device industry because it was implemented on “gross sales rather than profits,” which raised issues for small device firms.

However, a 2015 Congressional Research Service report said that the medical device tax seemed to have only “fairly minor effects” on jobs with “output and employment in the industry falling by no more than two-tenths of 1%.”

Antos said that though the tax “clearly” had an effect on the industry, he wasn’t aware of any studies or statistics that showed production and sales moving overseas because of it.

But Paul Van de Water, a senior fellow and expert in health policy at the Center on Budget and Policy Priorities, a left-leaning think tank, took an even harder line on the social media image’s assertion. “It’s absolutely false on the face of it,” he said. “There was no way the tax provided any incentive to shift production overseas.”

Van de Water also said that while there was some shift of manufacturing overseas while the tax was in effect, there were other factors leading that push, such as competition and pressure to reduce costs.

“There’s no way to attribute that to the device tax itself,” he added.

And, there’s another complication. Congress acted to put the medical device tax on hold at the end of 2015 — in part due to significant lobbying by the medical device industry, as well as opposition to it from both Republican and Democratic members of Congress who had medical device companies headquartered in their states. In December 2019, President Donald Trump permanently repealed the tax when he signed a bipartisan federal spending package.

Finally, does the now nonexistent medical device tax have anything to do with our current PPE shortage in the face of the coronavirus pandemic?

The answer to that is also no, said the experts.

The current personal protective equipment shortage can be attributed to the lack of a stockpile reserve of PPE, an initially slow response by the U.S. and the tariffs imposed against Chinese goods by the Trump administration, said Peter Petri, a professor of international finance at Brandeis University outside Boston.

AEI’s Antos considered it an issue of the huge demand for these items, which has made replenishing stockpiles more difficult.

According to a recent report from the Peterson Institute for International Economics, in 2018 China was the source of 48% of U.S. imports of PPE. Seventy percent of the United States’ mouth and nose protective gear, such as masks, came from China in 2018. Overall, China is a major supplier of PPE to countries worldwide.

Petri said this makes sense since China is a low-cost manufacturer of these relatively simple products. But it also became a problem once the White House started implementing tariffs on Chinese products.

“For nearly a year, U.S. buyers have been moving their PPE business away from China to other countries because of the Trump tariff wall,” Petri wrote in an email.

But those manufacturers in other countries were not able to scale up their production to make up for the amount of supplies needed when the coronavirus hit.

“Meanwhile Chinese suppliers were turning to markets in Europe. The U.S. could not have chosen a worse time to turn its back on the world’s largest PPE producer,” said Petri.

China’s massive manufacturing capacity did allow it to scale up production to account for the coronavirus pandemic, but because it had already established businesses in other locales and in response to the imposed tariffs, Petri suggested, it is unlikely that China would be as receptive now to U.S. requests for PPE.

Nothing in this viral image is accurate. There is even a spelling error.

Obama did not sign anything into law called the “medical appliance tax bill.” A moratorium was placed on the medical device tax he did sign into law as part of the Affordable Care Act in late 2015. Therefore, that tax was put on hold in 2016 and eventually repealed by Trump in 2019.

Instead, experts we consulted agreed that the current PPE shortage is more aptly linked to the inadequate national emergency stockpile of PPE, increased demand for the products and the Trump administration’s Chinese trade policies.

Our ruling is Pants on Fire.