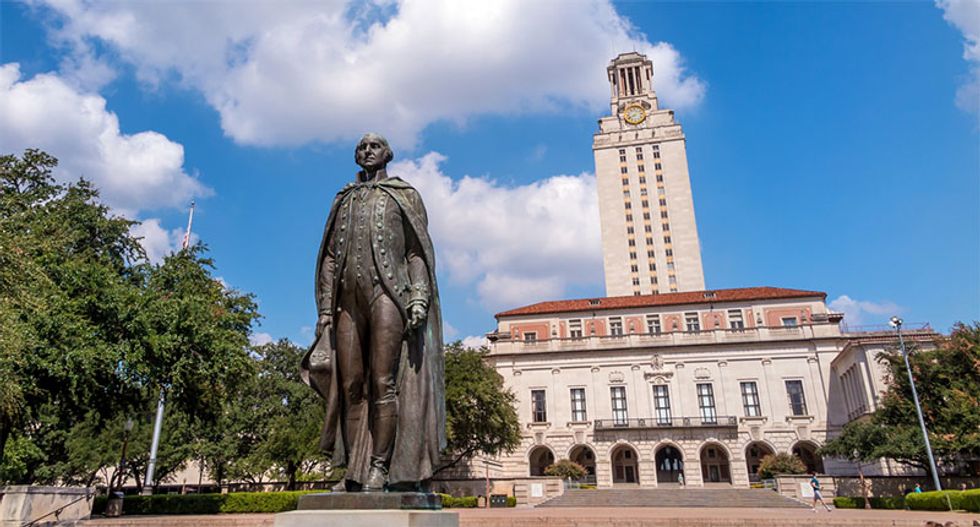 On the same day, the school announced it would furlough or lay off staff members across several departments in preparation for a dramatically skinnier revenue stream just a few months down the road. Such problems will likely be widespread in higher education, especially at state universities and smaller private colleges.

In a third announcement, on Wednesday, UT joined a number of institutions when it took the unprecedented step of splitting the fall semester in two — the first half in-person, the second remote learning.

On top of it all, the school's president, Greg Fenves, is leaving next month, handing the keys to Jay Hartzell, an economist and dean of the university's McComb School of Business. This would be a challenging transition at any time for one of America's largest schools, let alone in the middle of the most turbulent time for higher ed in the country's history.

The campus in downtown Austin, typically home to 50,000 students, has been dead quiet since mid-March, when the pandemic forced the school to close classrooms and suspend all non-essential campus activity.

Since the outbreak, university administration has reported four clusters of infections, with the school's "patient zero" being the president's wife, who apparently contracted the virus on a group trip to New York with students, alumni and campus employees.

Fenves was on the trip with his wife but did not contract the virus. Other people on the trip were presumed positive.

When the school learned of previous COVID clusters — such as when 49 students contracted the virus on a spring break trip to Cabo San Lucas, Mexico — the administration blasted campus-wide emails to students, faculty, staff and a broad swath of people tangentially connected to the institution.

But after the recent outbreak among custodial staff, the school posted a notice on its website's news page, informed local press, and sent an email limited to university leadership.

"This incident demonstrates the importance of our teammates following all safety procedures," facilities services director Darren Hale wrote in the email.

"We need to reinforce the importance of teammates not coming to work if they feel unwell and develop strategies to ensure that teammates maintain social distancing and consistently wear face coverings," he added.

Since the pandemic began, 26 UT employees have tested positive for COVID-19. Over the last two months, however, the school scaled back its daily email updates to once a week, and chose not to break that protocol even for the recent cluster, which according to university spokesperson J.B. Bird appears to have been confined to a group of custodial staff working the night shift.

"People get message fatigue," he explained.

"I was shocked when I heard that story last night," Carol Guthrie, business manager for the Austin branch of the American Federation of State, County and Municipal Employees — the local union that represents city workers — told Salon, calling the news "alarming."

"So far we haven't been hit like that at the city level," she said, pointing out that the lion's share of the city workforce is still working from home, despite the state of Texas' slow but steady pivot towards reopening. Custodial staff have been following strict guidelines, she said, including wearing masks and regular temperature checks before entering buildings.

"As far as we're aware we haven't had a case yet," she said. "I don't know what they could have been doing over there," meaning on the UT campus

Custodial staff in most U.S. jurisdictions are considered essential workers, since they are crucial to keeping public facilities safe, clean and functional. That designation that places them in some of the most hazardous positions during the pandemic.

They are also frequently immigrants or people of color, groups that have been disproportionately impacted by the pandemic.

"Janitorial work is always essential work. And keeping our communities clean and disinfected is especially dangerous during the COVID era," Elsa Caballero, President of the Service Employees International Union, Texas branch, told Salon in a statement.

"That's why the Justice for Janitors campaign, the SEIU, and SEIU Texas are urging Congress to support essential janitorial staff with funding for personal protection equipment, premium hazard pay, and layoff protections so janitors can continue doing essential cleaning and keep themselves, their families and the public healthy," she said.

Bird said that UT officials did not know exactly how the virus spread among its custodial staff members, but said they had been practicing social distancing and wearing masks.

Of the school's 12,000 employees, he said, only 1,000 still return to campus on a regular basis. Those include custodial staff, campus police and one of the country's most advanced epidemiological research teams, which has been integral to vaccine development, including promising advances at the pharmaceutical company Moderna.

It's not clear how many people came in contact with the staff members who tested positive, but all 11 are in isolation.

Bird told Salon that after the first staff member notified a superior, the school's occupational health team initiated a contact tracing chain that eventually uncovered the cluster. The school is still tracing the spread and notifying people who might have been exposed.

"Universities are in a particularly challenging spot here, no question," a UT official told Salon in an email. "We want to bring our students back to campus safely, and everyone wants to get back into the swing of things. But this incident brings to life a natural concern about how a college or university — especially a large one — can monitor and enforce safety policies, especially with such little federal guidance, the unexpected costs of adjusting to the crisis, and the budget cuts coming our way."

Bird echoed some of those challenges. "We rely on employees notifying us if they have had symptoms or had a test," he said.

This cluster, however, occurred among a limited number of adults on an empty campus, who are paid to work there. When the fall semester begins, the Austin campus — like those of hundreds of other colleges and universities — will presumably teem with tens of thousands of students who have spent most of the previous few months locked down with their families.

Furthermore, the only enforceable measures available to schools across the country are rather limited, and only applying to classes and other university-sanctioned, on-campus activities. Schools can break the semester into in-person and remote learning portions, but as long as students, faculty and staff are on campus, they will be on their own outside the classroom.

"Look, we are seeing every day on the news and social media just how difficult the enforcement side really is in practice — and that is at a restaurant or a grocery store, not a university with thousands and thousands of undergraduates."

As of May 20, Texas had reported more than 51,000 cases and more than 1,400 deaths due to COVID-19, according to Department of State Health Services data.