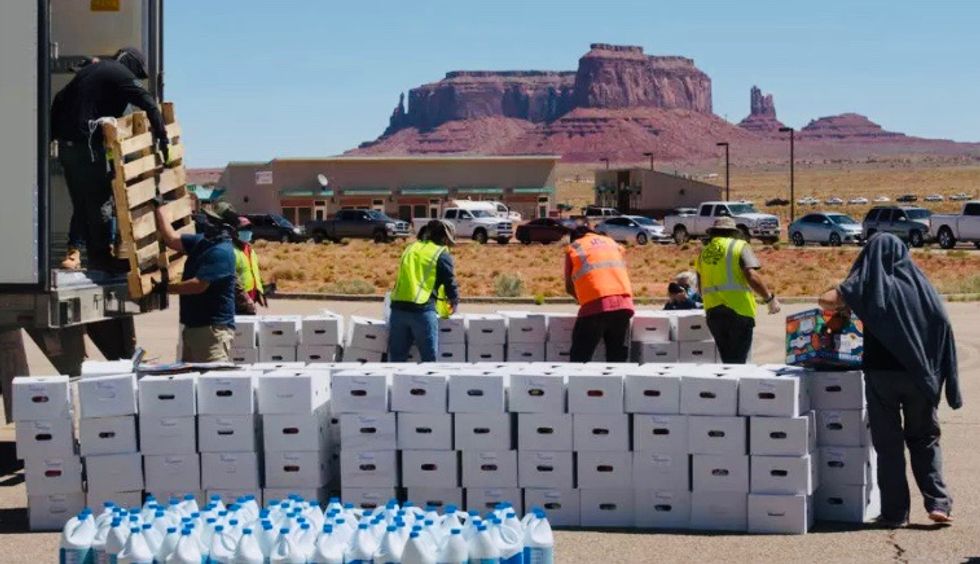 Monument Valley would normally be teeming with tourists at this time of year -- instead it's become the latest COVID-19 hotspot inside the hard-hit Navajo Nation, America's biggest Native American territory.

The park's colossal sandstone formations are immortalized in film, the setting of many of John Wayne's gun fights.

Today, however, they form the backdrop to family doctor Wendell Key's rounds, as he goes from car to car in the parking lot of a small health center where patients receive coronavirus consultations in their vehicles.

Dollie Crank, 63, previously tested positive and was self-quarantining at home, but her symptoms -- including, crucially, her shortness of breath -- are getting worse.

"I'd feel safer for her to go to hospital," says Key, wearing a gown and N-95 respirator as he uses a stethoscope to listen to her chest.

"She'll need oxygen, and probably if it progresses further she may need other ventilatory assistance."

Crank, for her part, puts on a brave face between coughing fits. "I'm not really worried because I know I can make it through," she says before driving off in her pick-up truck, bound for a hospital.

Home to 175,000 people across Arizona, New Mexico and Utah, the Navajo Nation has been hit with 4,200 cases and around 150 deaths. Per capita fatalities are among the highest in the country.

San Juan County in Utah, where the health center lies, is now seeing its own surge, with so far nearly 240 cases and four deaths.

Key, the clinic's lone doctor on duty, is kept busy with patients filling up the parking lot -- highlighting the challenge facing the sovereign territory, which has scarce resources and a vulnerable population.

Fresh fruit and produce are hard to come by and financially out of reach for many -- as a result, most people turn to processed food.

Many are obese and have diabetes, which have been shown to worsen the progression of the COVID-19 illness. At least 30 percent of citizens lack running water necessary to maintain strict hygiene measures.

The Nation has just 12 federal health centers, with clinics such as the one in San Juan County run by a medical non-profit.

Many residents of Monument Valley rely on tourism for their livelihoods, providing guided tours, serving food, and making and selling arts and crafts in one of the most photographed locations in the United States.

With the park shut since late April to help contain the spread of the pandemic, and households already struggling on median annual incomes of around $20,000, residents in the area are being pushed to the brink.

Several hundred cars formed a line at the Visitor Center earlier in the day for aid distribution, many arriving several hours early to try to make sure they aren't left out.

"It's taken a huge toll on our people," said Lanell Mernard-Parrish, 49, who works as a secretary-treasurer for the local chapter of the Navajo government and was volunteering to load care packages into cars.

Mernard-Parrish recently lost her mother-in-law to the virus, she said, a situation made all the worse by the fact that no one could be with her when she died.

"As soon as we found out she was ill, they took her in. And from the day that she was tested positive, she only stayed another six days, and then we lost her," she said.

"It's been really hard on my husband."

Political leaders in some parts of the country have grown fed up with lockdowns, including in Arizona which is set to open the Grand Canyon this weekend, despite the fact that cases in the state are continuing to rise.

Navajo Nation President Jonathan Nez said he was worried about the potential knock-on effect if tourists decided to try their luck at his administration's parks, which will remain closed.

The Arizona Senate’s partisan “audit” last year claimed 282 dead voters cast a ballot in the 2020 general election in Maricopa County, but Arizona Attorney General Mark Brnovich said only one of those was genuine, according to a letter he sent to the Senate on Monday.


“Our agents investigated all individuals that Cyber Ninjas reported as dead, and many were very surprised to learn they were allegedly deceased,” Brnovich wrote in his letter to Senate President Karen Fann.

A California man with serious health problems died in a San Diego jail after his second arrest in three days for being intoxicated, but his daughter said he had diabetes and dementia.

Gilbert Gil lay dead in a jail cell for 15 hours after his second arrest in February, and daughter Jennifer Schmidt said the sheriff's department still hasn't provided any details about his cause of death and the medical examiner hasn't issued a report or surveillance video, reported KFMB-TV.