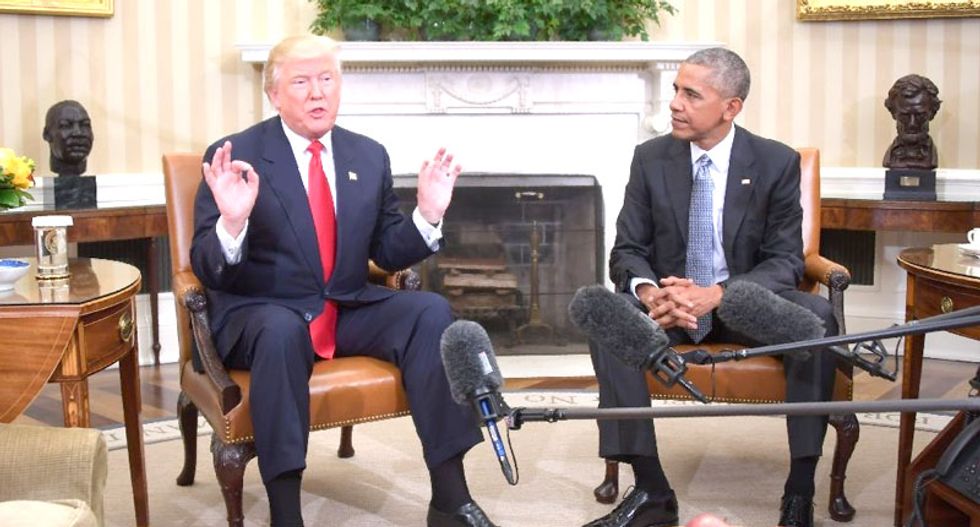 Early last week, George W. Bush released a video in which he called for compassion and solidarity during the pandemic. It was the sort of sentiment we used to assume was just pro forma from our leaders in a time of crisis but was a startling departure from anything we've gotten from President Trump. Trump naturally, was miffed and complained that Bush hadn't supported him during the impeachment.

On Friday, Yahoo News reported on a conference call Barack Obama had with a large group of former administration staff and supporters in an effort to rev them up for the Biden campaign. Since the call included 3,000 participants, Obama undoubtedly knew it would be made public. So his sharp criticism of the administration's response to the COVID-19 crisis was notable. I think everyone expected that he would be campaigning for his former wingman Joe Biden, but this was unusually pointed:

This election that's coming up — on every level — is so important because what we're going to be battling is not just a particular individual or a political party. What we're fighting against is these long-term trends in which being selfish, being tribal, being divided and seeing others as an enemy — that has become a stronger impulse in American life.

It's part of the reason why the response to this global crisis has been so anemic and spotty. It would have been bad even with the best of governments. It has been an absolute chaotic disaster when that mindset — of "what's in it for me" and "to heck with everybody else" — when that mindset is operationalized in our government.

"Absolute chaotic disaster" describes it perfectly. Since Trump has already exploded all the other norms it's past time for some of the elder statesmen to remove the traditional cone of silence that requires former presidents to be quiet during their successor's term. We've got 80,000 dead and counting who need a voice in this disaster.

I was a little bit surprised when Trump didn't respond. He spent the weekend at Camp David with the Joint Chiefs of Staff and his national security team. We saw pictures of all these middle-aged and older white men sitting in close quarters without masks, and you have to wonder what could possibly be so important they felt the need to convene such a meeting in the middle of this contagion. Perhaps the president really was too immersed in the crisis to care what his predecessor had to say about him?

Not bloody likely. On Sunday Trump spent the entire day tweeting and retweeting like a lunatic, much of the time about the leftovers of the Russia investigation, including the Michael Flynn case and numerous threats that Obama himself was in the crosshairs of the "investigation of the investigation," which Trump excitedly started calling "OBAMAGATE." Apparently he finally heard about that phone call.

If you didn't know better, you think the global pandemic that's killing thousands of Americans every single day was pretty much over. The president had barely a word to say about it in more than 125 tweets and retweets, other than a few in which he managed to pat himself on the back while insulting Obama and Biden.

As you can see, that's completely absurd. The H1N1 epidemic killed about 12,000 people in the U.S. over the course of a year. We are on track for more than 100,000 dead in less than three months. Who could possibly buy this ridiculous comparison?

But Trump's core tactic, right here and now, is to try to convince everyone that he isn't presiding over a mass death event in our own country, the likes of which Americans haven't seen in more than a century. Last week he spoke to the governor of Iowa in one of those unmasked, up-close meetings he's demanding of fellow Republicans to try to prove the virus is no big deal:

When the virus started sweeping through the White House itself, Trump still couldn't allow himself to admit what it actually means:

His erratic thought processes and unhinged behavior are getting worse. I suspect that's largely because he simply cannot do what he has always done, which is to fudge the numbers. That doesn't mean he and his accomplices aren't going to try.

A few weeks ago, Salon's Amanda Marcotte observed that that Trump's stated desire to "keep his numbers down" from the very beginning of the pandemic crisis wasn't limited to this specific circumstance. Lying about numbers is a lifelong habit:

Lying about statistics is at the heart of who Trump is. The man has never met a number that he didn't think he should immediately improve to flatter himself through straight-up lying and manipulation.

Trump compulsively cheats at golf.  His first act as president was to force his press secretary to lie about the size of his inauguration crowd, and then to force official photographers to edit the photos to make his crowds look bigger. Trump spent ungodly amounts of effort bullying and manipulating the staff at Forbes to believe he was richer than he was, in order to get on the Forbes 400 list, where he clearly didn't belong. Trump has lied constantly on both his tax returns and his loan applications to banks. ..

(I could add his lies about his yuge hands, but that would be crude.) The point is that while he routinely lies about everything, lying about the number of sick and dying Americans takes a particular form of chutzpah.

He's doing it anyway. The administration deep-sixed the detailed CDC guidelines for states and local governments to thoughtfully and strategically open up their businesses and other institutions — clearly because they would make clear that what the states are actually doing is unsafe. Now we have reports that the Trump administration literally plans to start lying about the death toll. Axios reported last week:

A senior administration official said he expects the president to begin publicly questioning the death toll as it closes in on his predictions for the final death count and damages him politically.

Of course, in actual reality the death toll is almost certainly being understated. Until mid-April, a person was only identified as having died of COVID-19 if they had tested positive for the coronavirus before death — and testing was sporadic at best.

This strategy appears to be working for Trump with the base. According to polling, 40% of Republicans believe there are fewer deaths than are being officially reported. Maybe he figures if he just keeps tweeting about "Obamagate" he can convince them that the whole thing never happened at all.