WATCH: Donald Trump explains why Americans must die to reopen the economy 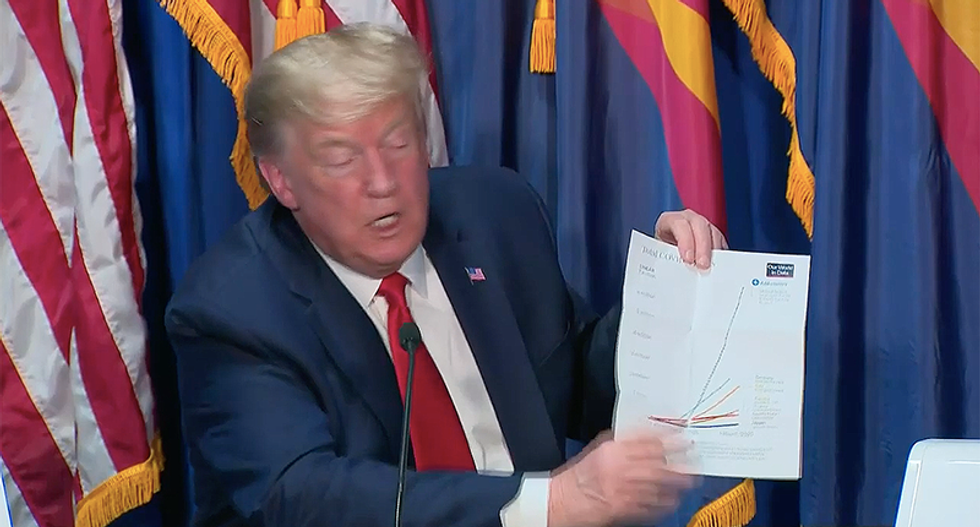 President Donald Trump has been declaring victory against the coronavirus while deaths from the virus are still continuing to climb in the nation as a whole.

According to what the president told the press in Arizona Tuesday, the number of tests being given is the highest in the world. He held up a chart showing the United States crushing other countries. The problem with the chart is that it isn't standardized for population. When looking at countries with populations of 5 million people or more, the United States lags behind many in Western Europe, Singapore, Canada, Russia, Israel and the United Arab Emirates.

"So are you declaring mission accomplished?" asked CNN's Jim Acosta.

Trump said no, and admitted that people will be “affected badly” but the country must open anyway.

"I'm viewing our great citizens of this country to a certain extent and to a large extent as warriors. They're warriors. We can't keep our country closed. We have to open our country ... Will some people be badly affected? Yes. But we have to get our country open and get it open soon." he said.

Trump just effectively suggested that people must die for the sake of reopening the economy. "It's time to open… https://t.co/PfzHNGinUJ
— Chris Sommerfeldt (@Chris Sommerfeldt) 1588712642.0

Asked by @Acosta to explain the logic of phasing out the White House coronavirus task force while the pandemic is o… https://t.co/dYR6DAYAL0
— Aaron Rupar (@Aaron Rupar) 1588712353.0

.@jeffmason1: With doctors saying there might be a recurrence of coronavirus in the fall, why is now the time to wi… https://t.co/wcjWGtaNdo
— Aaron Rupar (@Aaron Rupar) 1588712520.0

Trump on why businesses should reopen: "I'm viewing our great citizens of this country to a certain extent and to a… https://t.co/WuDOB1JyTC
— Aaron Rupar (@Aaron Rupar) 1588712681.0