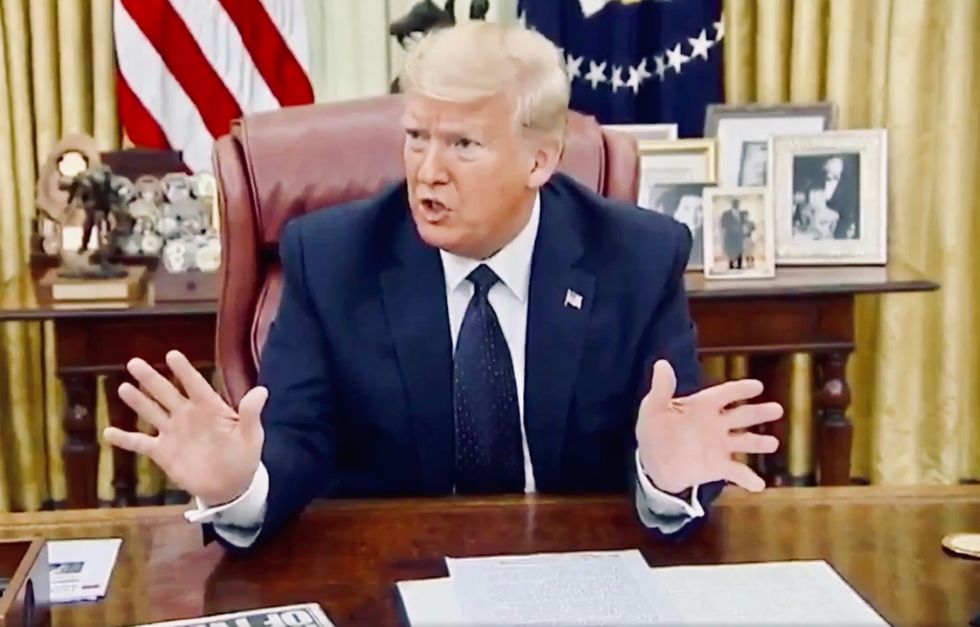 President Donald Trump went on a long rant Thursday afternoon when a reporter told him he was wrong about mail-in voting. Trump is falsely claiming the State of California is sending out ballots to everyone in the state, including non-citizens.

"Governor Newsom has not sent ballots out to everybody in California," a reporter told Trump, as the President, displeased with being fact-checked, rearranged papers on his desk. "They're only going to registered voters."

Trump repeated has lied about levels of fraud with mail-in voting:

The United States cannot have all Mail In Ballots. It will be the greatest Rigged Election in history. People grab… https://t.co/MXlawsyguy
— Donald J. Trump (@Donald J. Trump)1590329316.0

"So when he sends out 28 million ballots," Trump responded to the reporter, falsely (video below), "and they're in all the mailboxes, and kids go and they raid the mailboxes, and they hand them to people that are signing the ballots at the end of the street – which is happening – they grab the ballots. You don't think that happens? There's ballot harvesting where all – you know we had seven elections, for Congress, and they were like tied, they lost every one of them, 'cause they came and they dropped a whole pile of ballots on the table," Trump claimed.

"But you don't think that they rip 'em out of mailboxes?" the President asked. "All the time you read about it. You can read about it, take a look," Trump instructed.

"They do worse than that," the President continued. "In some cases they won't sell them, like, to a Republican community, a conservative community. They don't happen to send the ballots to those communities. And there's no way of checking. No, you have to go and you have to vote. Voting is a great thing. Voting – we would be the laughing stock of the world. And if you just, use common sense, you know that? You know that's going to happen. But they raid the mailboxes, they can even print ballots, the same paper, the same machine, nothing special, they get the same paper, the same machine, they print ballots, and Bill would have to do a great job to catch them doing it," Trump continued, pointing to the Attorney General.

Nothing the President said there is true. Also, NCRM could find no news articles about children stealing ballots from mailboxes.

An NBC affiliate in Spokane, Washington in 2018 reported on a man who did not get his mail-in ballot, and his neighbors said they did not either.

Spokane County Elections Manager Mike McLaughlin told KHQ News, "Every ballot that is returned goes through our sorter is checked against the barcode to make sure it is a valid ballot to be returned, and every signature is verified on all of these ballots."

The President is fact checked on his mail in voting tweets in real time and responds with a long rant which include… https://t.co/2nA3sWEpxx
— Acyn Torabi (@Acyn Torabi)1590699637.0