WATCH: Woman arrested after claiming to be 'sovereign' who doesn't have to follow COVID-19 laws 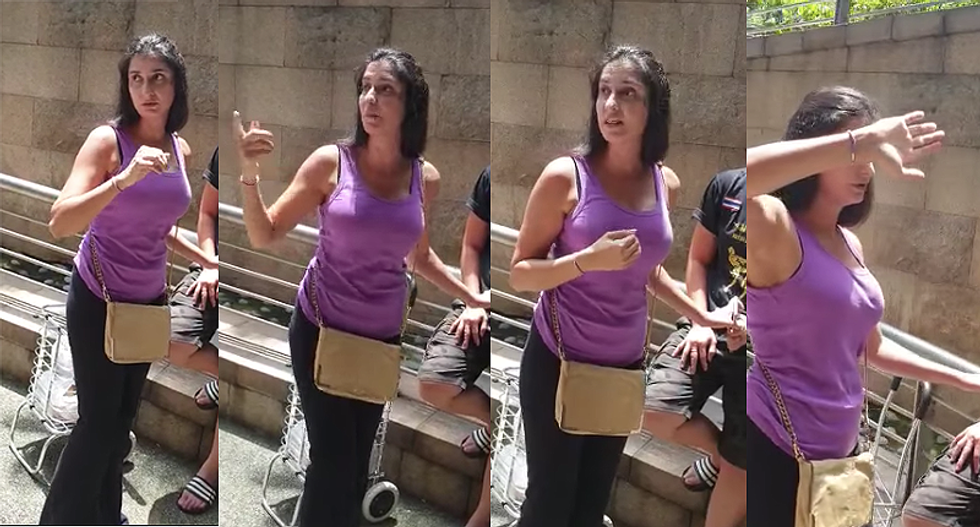 A video has surfaced of a woman who refused to wear a mask in a public market while picking fights with passers-by.

According to The Straits Times, the Singaporean woman was arrested Monday evening local time after she assaulted one of the people she was harassing. She was also charged with causing a public nuisance and not wearing a mask.

"Everyone should take the circuit breaker measures seriously. The police will not tolerate such blatant disregard of the law and wilful breaches of safe distancing measures," the police said in a statement. "Let us all do our part to curb the spread of Covid-19."

In one clip shared of the incident, the woman says to a group of people: "You don't tell people what to do, that's the law."

Someone responded to her, evidently saying that she should be wearing a mask.

"You should have minded your own business... In the first place, you should not have been shouting at me," she replied.

In another incident, she was seen trying to cover her face while being filmed. She was holding onto a phone with another woman she allegedly assaulted while she was insulting another group of people.

"This doesn't even make any sense. If you're a person in Singapore, you have to follow the rules of Singapore," replied a man off-screen.

It's unclear where the belief came from but it certainly didn't matter when police came to arrest her.

Home Affairs and Law Minister K Shanmugam said on Facebook that she could be part of a movement in the United States that "rejects Government, rejects the police and any kind of authority."

"Well and good. But then such people should not live within society - she should not expect any of the benefits that come from this system of governance, including her security, medical care, other benefits," he added.

He went on to explain that the philosophy doesn't exactly extend during a virus that can spread beyond an individual.

"If she doesn't follow the rules and (say) ends up infecting someone - why should society accept that? Or if she falls ill herself, she will be imposing a medical burden on the rest of the society - whose rules she rejects, presumably," he said. "Very odd. Usually, in such cases, there will be more to it than meets the eye."

The United States is facing similar issues with Americans who are sick of quarantine and stay-at-home orders and have decided to break out to get hair cuts and protest at state capitols.