‘We like it the old way’: Trump mocks social distancing, denounces testing as ‘overrated’ in Pennsylvania speech 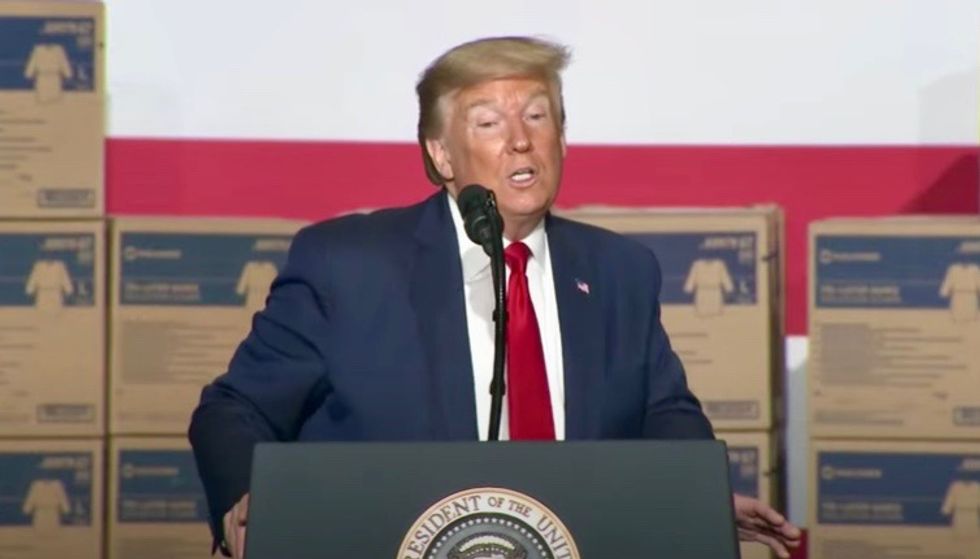 President Donald Trump flew to Allentown, Pennsylvania Thursday afternoon, where he visited the Owens & Minor medical supply facility, which makes personal protective equipment. As usual he delivered a speech and as usual, he undercut the CDC guidelines designed to keep Americans safe from the deadly coronavirus pandemic.

During his speech the President mocked and disparaged social distancing efforts and all but denounced testing, seeing both as remnants signaling the pandemic is still present. (In fact, the "curve" is flattening, but in comparison to many other countries, is not really going down.)

"Thank you, all that social distancing," Trump sarcastically told his audience as he stood in front of stacks of boxes of PPE. "You people all spread out – six feet. That's pretty impressive."

"But we like it the old way," Trump continued, as if to admonish himself for praising the audience for literally taking life-saving measures. "A little bit better, don't we?"

"We'll be back, we'll be back to that soon, I think, I really believe it."

Later during his speech, which was an official White House taxpayer-funded trip yet laced with partisan rhetoric including attacks on his presumptive opponent, Joe Biden, and the press, Trump disparaged the very idea of coronavirus testing.

"So we have the best testing in the world," he continued, changing from "tests" to "testing."

"It could be that testing's frankly," he said, taking a long pause, "ah, overrated?"

"Maybe it is overrated. But whenever they start yelling, 'We want more, we want more' – 'cause they don't want to give you credit, then we do more, and they say, 'We want more.'"

"But we have the greatest testing in the world. But what we want is we want to get rid (clip ends)."

Trump went on to claim, "we have more cases than anywhere in the world. But why? Because we do more testing."

That is a lie. The United States, due to President Trump's refusal to ensure there were enough tests early in the pandemic, has more cases and more deaths than any country on earth. On a per capita basis the U.S. ranks 38th in testing, and 13th in deaths, where number one is the worst. And the U.S. is getting worse. Two weeks ago the United States ranked 16th in deaths, out of 214 countries and other localities.

Seeming to be unable to differentiate between actual cases and statistics, Trump went on to explain why he opposes testing.