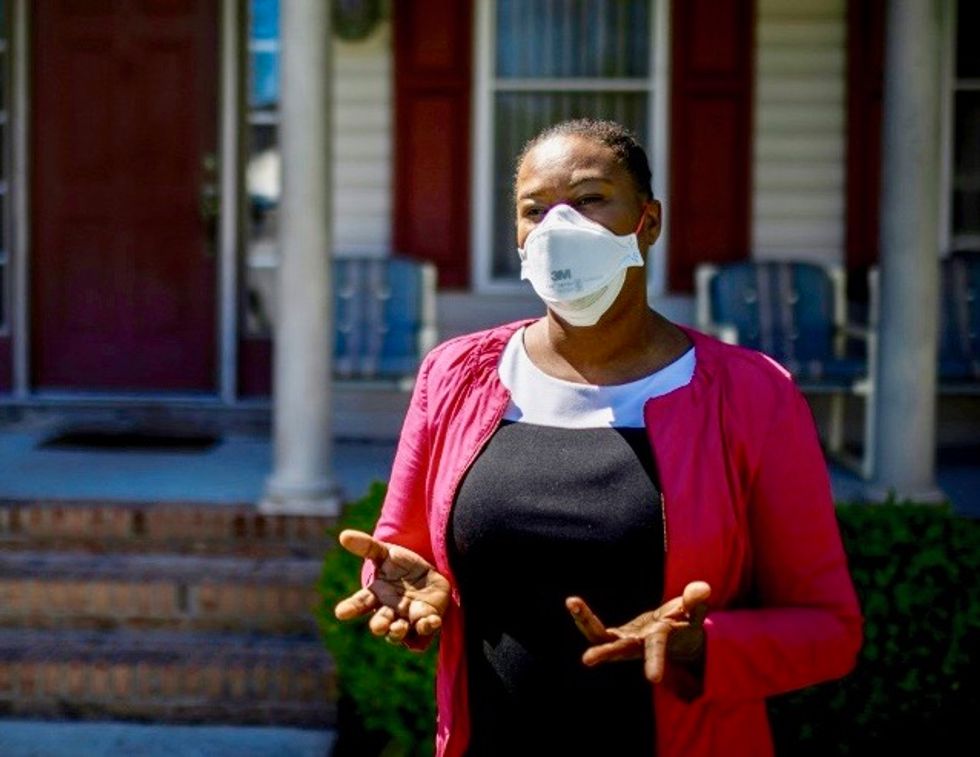 Tina says a little prayer every time she heads to work at a Delaware poultry plant, a plea that this will not be the day that the invisible killer picking off her colleagues comes for her.

With the coronavirus shutting down meat plants and threatening the country's food supply, she would rather not be there at all, but President Donald Trump has designated the sector as strategic, and low-paid workers like her as essential.

The 27-year-old mother works shifts at the Perdue packing plant in Georgetown, a major employer among the thousands of fellow Haitians settled in the area. If she wants to hold on to her job, she feels she has little choice but to clock in for her shifts, despite the risk to her and her family.

"Every day I come, I just pray to God that nothing happens," said Tina -- one of few workers who would agree to speak to a reporters, although even she declined to provide her full name for fear of reprisals.

"I want to go home, I have three kids at home, a baby, but I can't do that," she told AFP, speaking behind a mask. "I have no choice, bills are coming from left to right."

With no way of knowing who might be carrying the virus, "everyone is afraid of getting sick, people still works close together."

"They don't tell us who has been tested positive. Was that person beside me, talking to me, you never know."

Tina believes too little was done, too late, to protect workers like her.

"I just think that they should close a few weeks so they can clean the whole plant," she said.

The number of coronavirus infections has recently soared in the Delmarva peninsula, which reaches south out of Delaware to eastern Maryland and the northeast of Virginia.

The poultry packing industry has thrived off the cheap labor provided by Haitians and Hispanics, but it also has meant that they have been the first to be cut down by the disease.

AFP / Eric BARADAT A sign for the Human Resources department in the parking lot outside the Perdue Farms Chicken and poultry processing factory in Salisbury, Maryland

The small town of Salisbury, the historic base of Perdue, is home to a community of some 5,000 Haitians, at least 40 percent of whom are infected, according to Habacuc Petion, the owner of Oasis radio, which broadcasts in Creole to an estimated 20,000 listeners in the Delmarva area.

Many work for Perdue, and are refusing to stay home for fear of being sacked.

"Even if they have fever, they take a pill and go to work," said Petion.

"COVID-19 touched home," said the 45-year-old. "My cousin was 44, working at Perdue plant. Beginning of April, he could not breathe, his wife convinced the medics to take him to the hospital. In less than two weeks he died."

The disease's toll has also been boosted by a fear of hospitals and by the language barrier for many Haitians, doctors said.

"When they see people dying in New York hospitals, the lack of material and people put in dumps, they are scared thinking they won't receive the care they need -- and end up dying," said Nadya Julien, a Haitian nurse practitioner in Laurel, Delaware.

Some who speak Creole but little English have trouble explaining their symptoms, she said.

She herself contracted the disease and was hospitalized for six days in April, a story she tells her patients to help them overcome their fears.

Nurse practitioner Emanie Dorival said she alerted the local authorities very early to the number of cases piling up in her surgery in Seaford, Delaware.

AFP / Eric BARADAT Nurse practioner Emanie Dorival said she alerted the local authorities very early to the number of cases piling up in her surgery in Seaford, Delaware

"We are a rural area," she said. "We don't have the capacity in our hospitals if 200 cases show up."

While she agrees the poultry industry is "essential" she says "there is a way to keep it safe for the workers and the community."

Several major US plants where farmers send cattle, pigs and poultry have shut due to the rapid spread of COVID-19 between employees, who are often in close proximity on production lines and on breaks.

Faced with the threat of disruption to the nation's food supply, Trump has ordered meat and poultry plants to remain open during the pandemic that has claimed almost 70,000 lives.

Perdue has said it is doing all it can to ensure workers' safety, taking temperatures, providing protective equipment and practicing social distancing on the production line. Where it is impossible to keep workers a safe distance apart, it said it has installed screens.

It also increased workers' wages -- which Petion described as "a temptation that a lot of people can't resist."

Local health authorities are meanwhile stepping up testing for the virus, with factory workers at the front of the line. In Salisbury, some 1,500 people underwent tests on Friday and Saturday at the town's sports stadium. The results are expected this week.