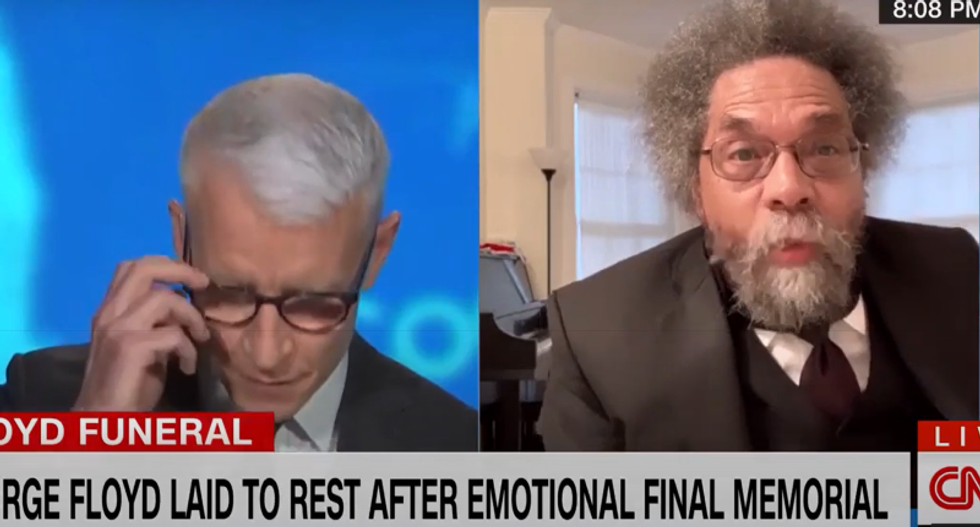 "We refuse to get in the gutter, and we'll go down swinging like Ella Fitzgerald, Muhammad Ali, in the name of justice," said West. "We do it for Brother Wyatt, we do it for my daughter, we do it for the Asians and for the whole world. Because that is the only hope of the world and that kind of love is always tragedy, comic and crucified with that kind of love. And you need to keep dishing it, generation after generation after generation."

"The Floyd family lifted up that spiritual moral banner in the midst of a moment in which we got all of the lies and crimes and be it — the Wall Street or White House or even Congress itself, we know they don't represent the best of this country. It is just that the best of this country right now seems to be so powerless, but in the streets of our nation we see this multi-racial, multi-cultural, multi-gender, different sexual orientations and different religions, Jewish brothers and sisters holding up Rabbi Abraham Joshua Heschel, the Catholics holding up Dorothy Day, the Protestants holding up William Kaufman and Lydia Maria Child, and the agnostics and the others holding up the Norman Thomases and the Edward Zaids."

"We've had — I have to say, you're — I never had the honor of taking one of your classes," said Cooper. "But I feel like I'm a student of yours and I learn lessons every time you speak."

"We're in it together, bro," said West. "Socrates never cries, but Jeremiah does and so does Jesus. We cry because we care, we're concerned. It is not about political correctness or self-righteousness, we cry because we are not numb on the inside and we don't have a chilliness of soul and a coldness of mind and heart."