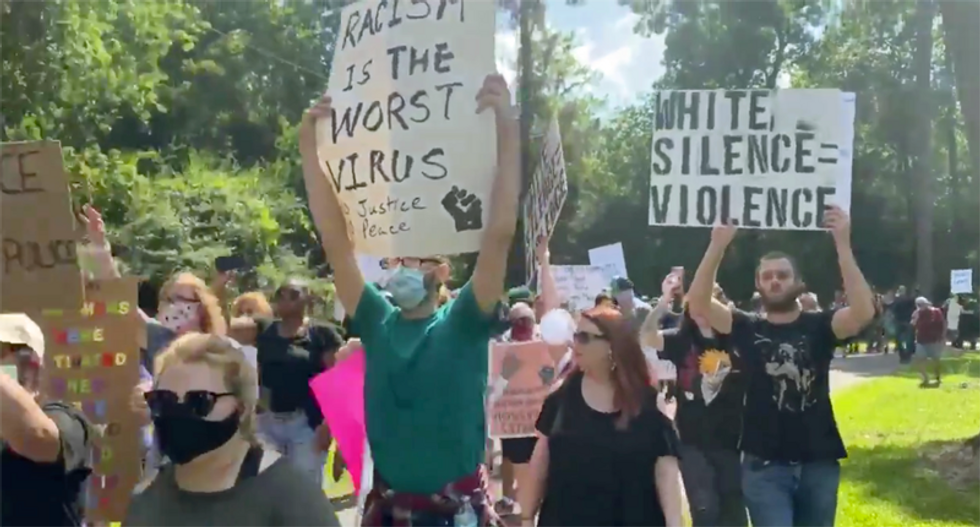 Protesters gathered in Vidor, Texas on Saturday for a rally against racism and police violence.

Hundreds are gathered in Vidor, Texas for a rally after the death of George Floyd. The organizer is calling on the… https://t.co/dbZ6UlhZDF
— Jordan James (@Jordan James) 1591475528.0

The East Texas town has long had a reputation for racism.

Vidor is a small city of about 11,000 people near the Texas Gulf Coast, not too far from the Louisiana border. Despite the fact that Beaumont, a much bigger city just 10 minutes away, is quite integrated, Vidor is not. There are very few blacks there; it's mostly white. That is in large part because of a history of racism in Vidor, a past that continues to haunt the present," Keith Oppenheim reported for CNN in 2006.

"Vidor was one of hundreds of communities in America known as 'sundown towns,' places where blacks were not welcome after dark. In some of these towns, signs -- handwritten or printed -- were posted, saying things like 'Whites Only After Dark.' But in general, sundown towns existed by reputation. Blacks knew they were places to avoid after dark," he explained. "Vidor also had a reputation as a haven for the Ku Klux Klan."

Here are some of the images from the protest:

There are roughly a dozen people out here armed with guns. They say the reason they’re out here is to protect a vet… https://t.co/2PuwmyyJSz
— Jordan James (@Jordan James) 1591477426.0

the crowd kneels for 8 minutes and 36 seconds of silence. protesters call out what Floyd said on the tape as it pro… https://t.co/9NEI2eBDZ6
— Christopher Hooks (@Christopher Hooks) 1591477792.0

This peaceful demonstration comes to an end with a man singing ‘stand by me’ # VidorProtest https://t.co/DzMRV2HYen
— Jordan James (@Jordan James) 1591479223.0