Bill Barr thinks he's in command and can wage war in our cities. Worse yet, he may be right 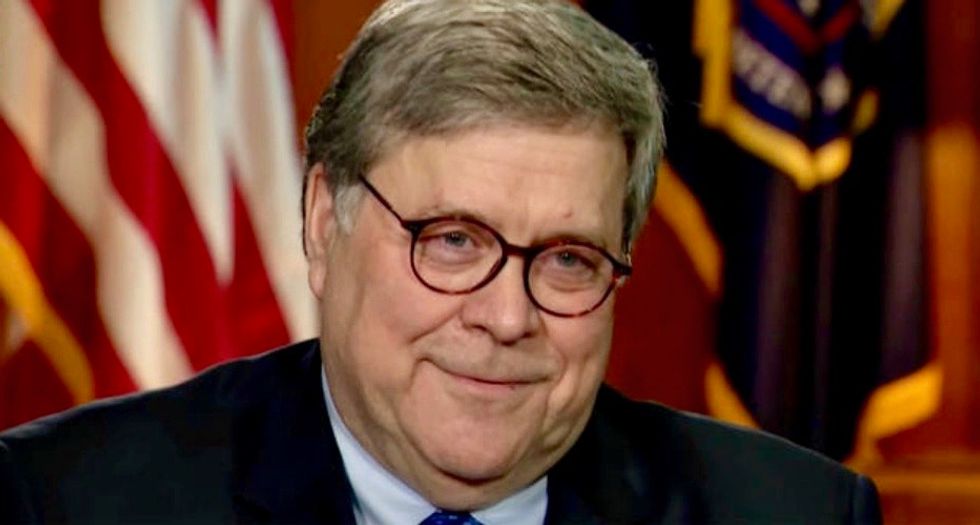 Since becoming Donald Trump's attorney general, Bill Barr has given several speeches to police organizations. This is not unusual for someone in his position, but Barr's comments have often been controversial. Last December he made the outrageous comment that "communities" have to "start showing more than they do the respect and support that law enforcement deserves and if communities don't give that respect, they might find themselves without the protection they need." It was bad enough that it hit the evening news:

Barr's overtly partisan behavior as attorney general has been well documented. He is the president's No. 1 henchman, and the most openly political AG in American history. His far-right views on religion and morality are also well-known. But despite his speeches like the one above, until this week I don't think it was well understood just how fully authoritarian Barr's worldview really is.

He appears to believe that the title "attorney general" is an actual military designation that gives him the authority to command troops on the streets of the United States. It isn't. (It's actually a very old term in common law, reflecting the idea that someone may hold a "general power of attorney" to represent the state.)

In a call with state governors on Monday, when Trump demanded they "dominate" their citizens and put protesters in jail for 10 years, one of his many threats was that he would unleash Barr and Gen. Mark Milley, chairman of the Joint Chiefs of Staff. Later that day Milley was seen wandering around outside the White House in battle fatigues as if he were about to launch an attack on Fallujah, but he and the rest of the military brass have since balked at Trump's stated desire to send in active-duty troops to "dominate" American cities.

Barr has no such reticence. The Daily Beast reported that on May 26 he immediately convened a task force to determine how the Department of Justice could find legal ways to quell the protests that were breaking out around the country. He immediately concluded that antifa and left-wing terrorists were responsible for the unrest, and determined that the feds could use the Joint Terrorist Task Forces, in partnership with state and local government, to institute a crackdown. Trump soon made a Twitter announcement that antifa would be designated a terrorist organization, despite the fact that it's not an organization at all (and no such designation exists for domestic groups).

Barr also set about immediately assembling federal troops to man the barricades in Washington. Indeed, he seems to believe he is the commander of the White House Defense Force, whose mission is to beat back the invasion of TrumpLand. He's the one who ordered the Robocops with "Military Police" and "Secret Service" emblazoned on their chests to tear-gas and drive back the protesters in Lafayette Square ahead of the president's feckless photo-op on Monday evening.

Since then the streets of Washington have been full of National Guard and strange-looking quasi-military riot police without insignia or identification, producing bizarre, disturbing images such as this one:

Barr explained on Thursday that he didn't see any reason for troops to wear any insignia because they might not want to identify themselves. That's not how it works in a democracy.

According to Bloomberg, a document prepared for the Joint Chiefs shows that Generalissimo Barr has 2,950 civilian troops from various agencies on the streets of D.C. This is on top of an equal number of National Guard troops and 1,700 active duty troops who are stationed outside the capital (and have been the source of a confused tug-of-war between Trump and Defense Secretary Mark Esper. )

Barr is directing all of it. The Washington Post reported on Wednesday:

From an FBI command center in Washington's Chinatown neighborhood, Attorney General William P. Barr has orchestrated a stunning show of force on the streets of the nation's capital — a battalion of federal agents, troops and police designed to restore order, but one that critics say carries grim parallels to heavy-handed foreign regimes.

On Thursday morning, Barr appeared for another press conference to update the nation on the Battle of Antifa, making this claim:

We have evidence that antifa and other similar extremist groups, as well as actors of a variety of different political persuasions, have been involved in instigating and participating in the violent activity.

The "different political persuasions" he mentioned appear to be the far right. In fact, three members of the "boogaloo" movement were arrested this week on terrorism charges in Las Vegas, a fact that apparently didn't merit specific mention. Nor did he express any concern about the reports of armed counterprotesters menacing demonstrators in small towns.

But then Bill Barr has a history of using these events to pursue whatever political hobbyhorse he happens to be riding at the time. It's never an opposition to police brutality, I think we can say that. Remember, this is his second go-round as attorney general. He held the same post under George H.W. Bush during the Los Angeles riots in 1992 and he handled that situation almost exactly the same way. He immediately put together a plan to get hundreds of federal troops from various agencies out to Los Angeles to quell the riots, actually commandeering an airplane and having it fly all over the country to pick up members of the Border Patrol and FBI agents and various others to "get them on the ground" in L.A.

This oral history of that event has Barr explaining what was going through his mind:

Q: Was President Bush shocked by this dramatic event in Los Angeles? Did it have an effect on him? Did he see it as an indicator of something wrong that had to be fixed in America?

Barr: I can't tell the extent to which he was shocked. He seemed surprised and wondered what was going on, what was this all about, and why the violence, that ugly violence. He asked me. Some people would probably disagree with what I told him, but I did lay a lot of it on gang activity.

Q: And you had a program to try and deal with that kind of thing.

Q: But that didn't galvanize.

Barr: Well, no one stopped me. We did make a lot of progress against gangs. But he wasn't as comfortable in that policy area, I guess. My basic take was that this was not civil unrest or the product of some festering injustice. This was gang activity, basically opportunistic. I don't know why he wasn't more interested in these issues.

That passage illustrates the largest single difference between then and now: the president. The senior Bush wasn't a fool, and throughout that episode he clearly kept Barr on a tight leash. He let him put his little battalion of desk jockeys and federal cops on the ground but he didn't indulge his military commander fantasies or allow him to declare war on street gangs and make the problem even worse.

Today we have a petulant reality TV star in the White House, who is deeply ignorant and has no patience for details. Barr is back as attorney general, and he's been given free rein. It couldn't be a worse combination.