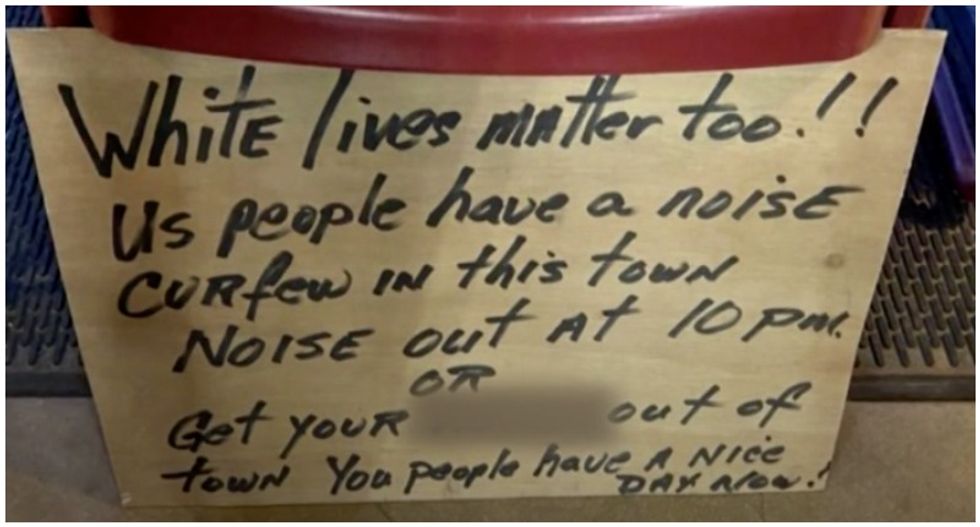 A Black family who were ready to start their vacation in Wimberley, Texas, had their excitement cut short when they found a racist sign placed at their front door, CBS Austin reports.

Kevin Burrell says although he and his family were playing games, they weren't being as noisy as the sign claims.

"That's the most terrible thing you could possibly do, is plan a trip and then you have to put in the front of your mind - not the back - that I need to prepare myself and my family in case something horrible happens," Burrell said. "It's so upsetting and hurting you can't enjoy yourself peacefully, law-abiding, taxpaying individuals. You're just going to have fun, unwind, let your kids have the opportunity to breathe fresh air out in the countryside and enjoy life without knowing that right around the corner or in the same area you're in, you're going to be dealing with bigotry and racism."

The company that owns the cabin where the family was staying issued an apology.

"All of us at 7A Ranch were angry, horrified, and sickened by the incident that occurred early morning on June 20 to our guests," the statement read. "We have limited surveillance video that shows an individual entering our property from a public road and then exiting on foot on the same road. Unfortunately, we cannot make out the individual. We contacted local law enforcement who came on site on June 20 for interviews. We also followed up with County Sheriff Gary Cutler to ensure that a thorough investigation is completed. I encourage you to contact Sheriff Cutler to find out if any further information has been discovered about the incident."

Burrell says that the hardest part about dealing with the incident was having to explain what happened to his children.

"It hurt me to my core that I had to explain it to my kids when we were leaving that we can't stay here because we're not wanted. I know this is not a first. This has been going on for hundreds of years, but it's sad we're still at that point where we have not progressed and not gotten better with these situations," Burrell said. "I just never felt I was going to have to be explaining this to my kids at 13- and 8-years-old, and to some of the little kids we had to explain to what was going on. As an adult, teenager, yeah, but when you've got to explain this to kids, that's just the time of where we're at right now. You have to let everyone know you have to be aware of what's going on around them, and that's totally sad because everyone is not living like that, so why is it that black Americans or anyone of color have to go through something like this just to exist. That's terrifying, sad, heart-wrenching. I'm just emotionally drained."