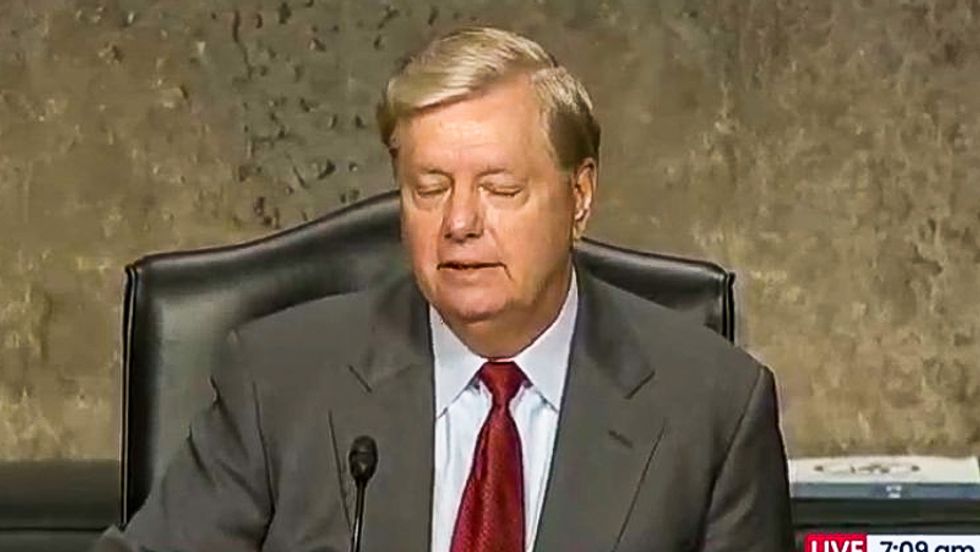 The Internet cried out in laughter on Wednesday after Sen. Lindsey Graham (R-SC) showed up at a Judiciary Committee hearing with a new hair color.

"OH MY GOD. Lindsay dyed his hair to look like Trump," Rick Wilson wrote at the top of the hearing. "CANNOT UNSEE."

Although the hearing intended to focus on Rod Rosenstein and the investigation into Russia's election interference, commenters on the Internet were fixated on the chairman's hair.

Take a look at the photos and read some of the remarks below.

@TheRickWilson Trumps pubic hair dye must not have fully dried before @LindseyGrahamSC went in for his daily praising.
— MTW (@MTW) 1591195936.0

@LindseyGrahamSC is that the color your hair turns into after you take your head out of Trump's ass just long enoug… https://t.co/0F12o5Nole
— Fatty Bolger (@Fatty Bolger) 1591196390.0

@LindseyGrahamSC you dyed your hair to look like your master. What a weak, feckless, immoral tool you are. You brok… https://t.co/NhDsZyfscQ
— kayottick (@kayottick) 1591197478.0

you are an Idiot a hypocritical lying idiot @LindseyGrahamSC like the new hair color tho… https://t.co/z7ktRztGVz
— Peaceful Oppo (@Peaceful Oppo) 1591204018.0