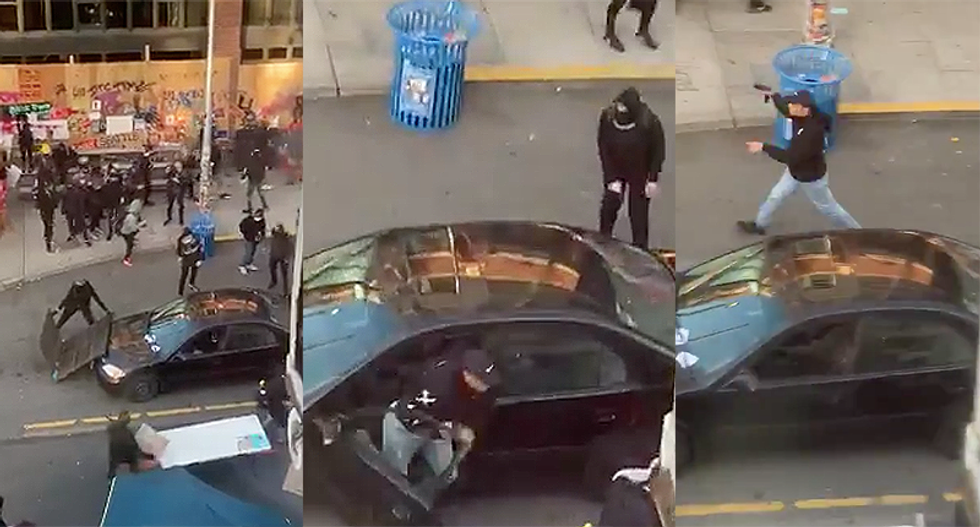 A car barreled through a police barricade Sunday evening and into a crowd of Seattle, Washington protesters, the driver then flashed his gun and appears to have shot a man.

"He exited his car and flashed a gun. The police say they have the man in custody and have the gun," said Chase Burns, who filmed the incident. "They asked for anybody who is hurt to come to the barricade. A man was on the ground on 11th and Pine. He’s up now."

In the video, the man can be seen running up to the car and trying to stop the driver from hitting anyone then falls over. A white man in a black hoodie and ball cap gets out of the car and waves the gun around.

Here's is more complete footage of what happened in Seattle, with the car speeding in, an apparent shooting, and th… https://t.co/1w0DpwjVSu
— Mike Baker (@Mike Baker) 1591589441.0

"I catch him and I punch him in the face...My whole thing was to protect those people down there," the victim of Seattle protest shooting said.

"A young man shot on 11th and Pine, Daniel, 26, wanted to tell his story. With the help of other medics, I got a tourniquet on his arm. Street medics were on the spot with gauze and pressure. He walked off the scene," tweeted Alex Garland.

Seattle Fire Department responded to the scene and gave information about the man's condition.

SPD reported that the shooter was apprehended.

The story is still developing and Raw Story will bring you information as it becomes available...