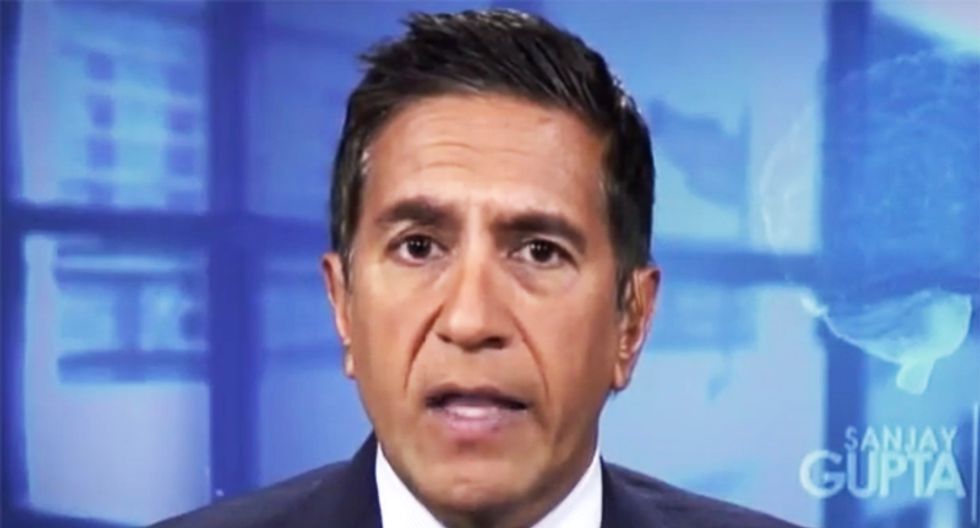 Dr. Sanjay Gupta is among the many public health experts warning that President Donald Trump's Tulsa, Oklahoma rally will cause an uptick in COVID-19 cases and deaths.

Currently, eight states are having an increase in coronavirus cases that are 50 percent or higher than in previous cases. Oklahoma, in particular, is experiencing a record number of cases, much larger than when the state shutdown with a shelter-in-place order. Their highest day came Thursday, with over 450 total cases. The previous high was the day before, with over 280 cases. Before noon on Friday, it was reported in Oklahoma that there were 352 new COVID-19 in the state.

Speaking on CNN Friday, Dr. Gupta explained that the numbers were expected to go up as reopening began. What remained in question, however, was the extent to which the cases were expected to increase and if states could handle the influx.

"It's not just that we're testing more. Therefore, cases are going up," said Dr. Gupta. "That sounds imminently reasonable, but the issue is that you have states where the testing has remained relatively flat like Florida that you just showed but cases have gone up significantly. In Oklahoma, testing rate has actually gone down and cases have still gone up."

Looking at Oklahoma, host John King said that the trend isn't where public health experts want for the numbers to turn.

"You're heading up and heading up in a dramatic way," King said. "This is a seven-day new confirmed case, The red line is the moving average. Recent days are shooting up like that. Hospitalizations -- if you're the governor of Oklahoma, you can say, 'we are down.' The question is are you starting to trickle back up at this moment of higher cases? Are you starting to trickle up? We bring up Oklahoma because the president is due in Tulsa there, due there for the first big rally since coronavirus. 19,000 people or so to pack into an arena. The governor says, 'you're welcome, Mr. President.' The Tulsa health director says, 'I'm a little nervous.'"

"Let me be clear, anyone planning to attend a large-scale gathering will face an increased risk of becoming infected with COVID-19," the Tulsa health director said.

Dr. Gupta said that anyone attending the rally will face a greater chance of getting the virus.

"Man, John, I'll tell you, that the cognitive dissonance there in those two clips that you just showed will be historic," said the doctor, talking about the difference between the Republican Oklahoma Gov. Kevin Stitt and the health official. "It's amazing. No wonder the country has whiplash over this whole thing. When we say there's increased risk, what I'm starting to learn is that it means different things to different people. It's obviously riskier if you're indoors. It's obviously riskier if it's a crowded situation if people are talking loudly, even yelling as often happens at rallies like this. it's -- it's a bigger risk if you're not masked. I think people sort of get that. John, what I wanted to do, what we spent a good chunk of the day doing is say let's take the specific event and sort of figure out how much of a risk is it really?"

He explained that 20,000 people inside the BOK Center, with another overflow crowd in the convention center next door, will dramatically increase the rate of infection.

"Look at the data and look at what's happening in Oklahoma right now and get an idea and what you'll find is probably 100 people may show up already infected," said Dr. Gupta. "John, I know you always like to learn new things, a principle called Pareto principle, which means 20 percent of those infected are likely to generate most of the infection spread. Twenty people out of 100 people. Twenty people out of 100 people will be the biggest spreaders at a stadium like this. Given all the different risk factors, they are likely to spread it now to 40 or 50 people each. Okay, so what does that mean. After that event 800 to 1,000 new infections are likely to occur as a result of an event like this and then what happened? Those 800 to 1,000 people go back to their homes and their communities and they start to spread it even more."

He called it the anatomy of an outbreak and noted that this is how viruses spread.

"So, if you're one of those 1,000 people, you think 'I have a 1 in 20 chance of being infected,'" Dr. Gupta continued. "These are just calculations. No one can guarantee or say how it's going to unfold for sure and now you get a better sense of what risk really looks like in a situation like this."

See the explainer below: