DC National Guard to investigate use of a helicopter to disperse George Floyd protestors in the US capital: report 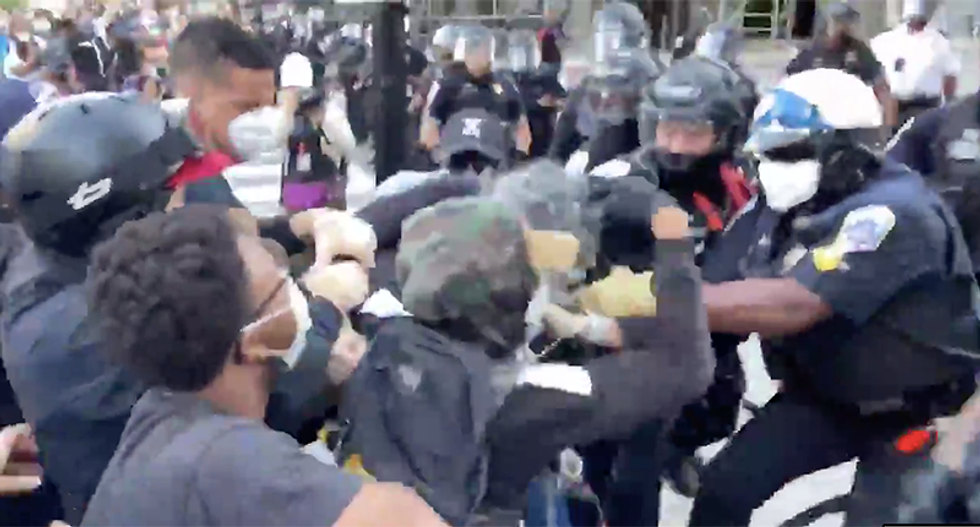 In Washington, D.C., “Justice for George Floyd” protestors have been patrolled not only by the Washington Police, but also, by the District of Columbia National Guard — which, according to the Army Times, is investigating the use of an unarmed helicopter that was used in what appeared to be an attempt to disperse a crowd.

In an official statement released on Tuesday night, June 2, the D.C. National Guard announced, “DCNG Commanding General has directed an investigation into the actions of our rotary aviation assets June 1. Our priority is the safety of our Guardsmen who support civil authorities. We are dedicated to ensuring the safety of citizens and their right to protest.”

A helicopter, the Army Times’ Kyle Rempfer reports, “was recorded hovering over protestors” and allegedly tried to disperse protestors with its rotor wash. After complaints were made, Maj. Gen. William J. Walker — commander for the D.C. National Guard — ordered an investigation.

Protestors returned to Washington, D.C.’s Lafayette Square on June 2 following a disturbing incident on Monday, June 1 that has drawn condemnation all around the world. On June 1, nonviolent protestors in Lafayette Square were violently removed and bombarded with teargas and rubber bullets in order to clear the way for President Donald Trump to walk to nearby St. John’s Episcopal Church for a speech and a photo-op.

On June 1, journalist Katie Hill discussed the use of a D.C. National Guard helicopter during protests and tweeted, “Helicopter isn’t moving and neither is the crowd. The show of military force on US streets is like nothing I would have believed if I weren’t here.”

Helicopter isn’t moving and neither is the crowd. The show of military force on US streets is like nothing I would… https://t.co/Hej1mDSWra
— Katie Hill (@Katie Hill)1591063600.0

Although “Justice for George Floyd” protests in the nation’s capital have been mostly nonviolent, a minority of extremists have resorted to violence and looting — and the tense atmosphere continued in D.C. on Wednesday morning, June 3.

“Demonstrations were mostly peaceful but tensions rose early Wednesday morning with bottles being thrown across the fence and law enforcement briefly shooting pepper spray at some protesters who still lingered in the early hours,” Rempfer reports.