Demands for justice at funeral of George Floyd 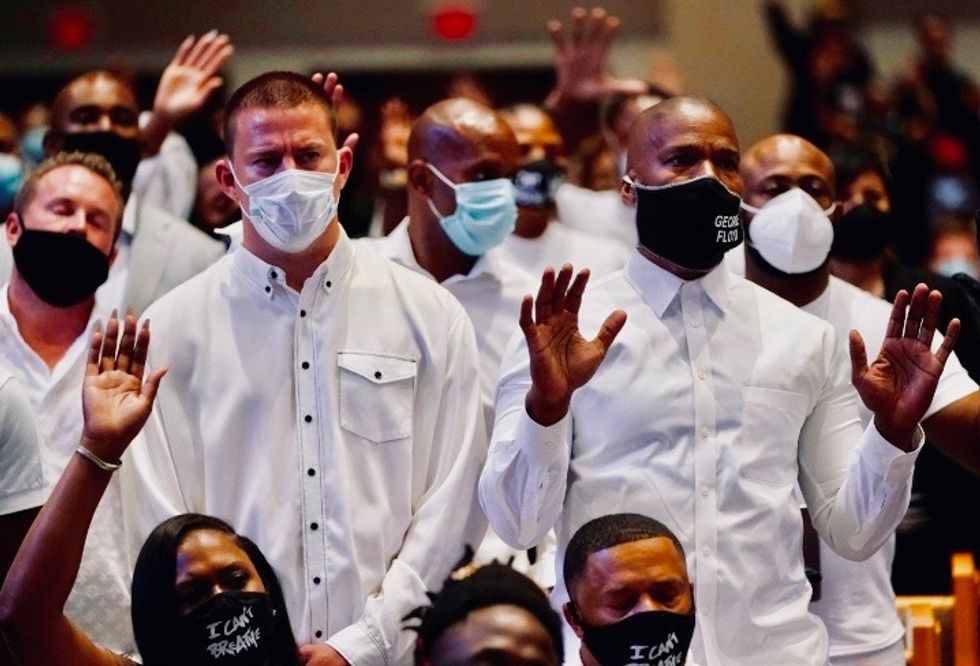 Houston said farewell to George Floyd in a rousing hometown funeral Tuesday, with poignant tributes and calls for justice for the 46-year-old African American whose death "touched the world" and ignited global protests against police brutality and racism.

Politicians, civil rights activists and celebrities joined in sharing memories of the man they called a "gentle giant" after his golden casket was carried into the sanctuary by six pallbearers in masks, as a row of police officers stood at attention and saluted.

Civil rights leader Al Sharpton delivered a fierce eulogy, punctuated by the deep chords of a church organ, in which he accused President Donald Trump of showing indifference over Floyd's death, and sending police a signal of impunity.

POOL/AFP / Godofredo A. VASQUEZ The Rev. Al Sharpton speaks during the funeral for George Floyd on June 9, 2020, at The Fountain of Praise church in Houston

"We are fighting wickedness in high places!" Sharpton thundered, uttering the phrase over and over as he accused Trump of "scheming on how you can spin the story rather than how you can achieve justice."

Acknowledging the presence of the parents of previous victims of police violence -- including Eric Garner, Botham Jean and Michael Brown -- Sharpton said they "know better than anyone else the pain" of the Floyd family.

AFP / Johannes EISELE The police salute as the casket with George Floyd arrives the Fountain of Praise church where services will be held for George Floyd on June 9, 2020 in Houston, Texas

"Until we know the price for black life is the same as the price for white life, we're going to keep coming back to these situations over and over again," the preacher told The Fountain of Praise Church in southern Houston.

Though the occasion was solemn, the church echoed with music and words of fond remembrance for a kind and gifted man whose savage death galvanized a movement.

"Even in a pandemic, people are walking out in the streets not even following social distancing because you've touched the world," Sharpton said.

"And as we lay you to rest today, the movement won't rest until we get justice."

Floyd died on May 25 as a white Minneapolis officer pressed a knee into his neck for almost nine minutes, his pleas of "I can't breathe" becoming a rallying cry for protesters.

His death has come to embody fractured relations between communities of color and police in the US and beyond as tens of thousands of protesters have taken to the streets.

The Fountain of Praise was the final stage in a series of ceremonies before Floyd's coffin is conveyed by horse-drawn carriage to his final resting place by his mother's grave, capping more than two weeks of tension around the country.

POOL/AFP / Godofredo A. VASQUEZ Family members grieve as they speak during the funeral for George Floyd on June 9, 2020, at The Fountain of Praise church in Houston

Flowers were piled high outside the church, attended by part of his family, before a portrait of Floyd whose open casket was visited by more than 6,000 well-wishers on Monday.

Some 500 guests -- all masked due the coronavirus pandemic -- filled the church, including actors Channing Tatum and Jamie Foxx, filmmaker Tyler Perry, singer Ne-Yo and boxing champion Floyd Mayweather who is reportedly paying all expenses.

Democratic presidential candidate Joe Biden, who has visited the family, offered words of condolence to Floyd's children in a video message urging them to "change the world for the better" in their father's name.

"Today now is the time, the purpose, the season to listen and heal," said Biden, who suffered his own tragedy with the deaths of a wife and two children.

"Now is time for racial justice... Because when there's justice for George Floyd we will truly be on our way to racial justice in America."

POOL/AFP / David J. Phillip Singer Ne-Yo (R) pays respects to the Floyd family at the funeral service for George Floyd at The Fountain of Praise Church on June 9, 2020, in Houston

The funeral comes after the Minneapolis authorities pledged to dismantle and rebuild the police department in the city where Floyd died during an arrest for allegedly passing a counterfeit $20 bill.

Derek Chauvin, the 44-year-old white officer who was filmed pressing his knee on the handcuffed Floyd's neck, faces up to 40 years if convicted on charges of second-degree murder, third-degree murder and manslaughter.

Hennepin County Jail/AFP/File / Handout Derek Chauvin, the white police officer facing murder charges over the death of George Floyd, did not enter a plea at his first court appearance

Three other policemen involved in Floyd's arrest are charged with aiding and abetting his murder. All four officers have been fired.

The arrest was caught on chilling cellphone video played in all corners of the world over the past two weeks.

AFP / Joseph Prezioso Protesters take a knee and raise their fists in a moment of silence for George Floyd and other victims of police brutality in Boston, Massachusetts

Floyd was born in North Carolina, but grew up in Houston's predominantly African American Third Ward where he was remembered as a towering high school athlete and good-natured friend.

Demonstrators have taken to the streets for two weeks of the most sweeping US protests for racial justice since the 1968 assassination of Martin Luther King Jr.

The demonstrations were marred by several nights of violence that focused attention at home and abroad on police brutality as numerous videos have emerged that allegedly show incidents of heavy-handed policing.

The Democrats have introduced legislation in both chambers of Congress, that they hope will make it easier to prosecute officers for abuse, and rethink how they are recruited and trained.

Some US cities have already begun to embrace reforms -- starting with bans on the use of tear gas and rubber bullets.

A Boston police sergeant and founder of the anti-vaccine mandate group can be seen in a video arguing with fellow police officers who arrived at a restaurant where she refused to show her proof of vaccination, The Boston Globe reports.