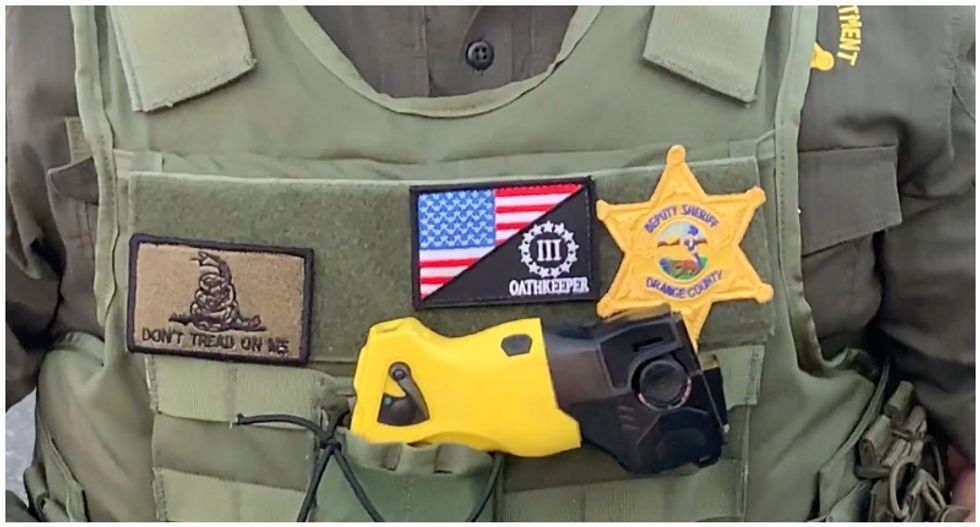 A California sheriff's deputy who was working the scene of a protest is under investigation for wearing a patch with symbols depicting what the Orange County Sheriff's Office describes as "extremist groups."

Image that surfaced online this Wednesday show a deputy wearing a patch with the symbols of the Oath Keepers and the Three Percenters, which are known to be right-wing anti-government militias, Voice of OC reports.

“We are aware of photos and video regarding an Orange County Deputy Sheriff wearing patches on his uniform that are associated with extremist groups,” Sheriff Don Barnes’ office said in a statement. “This deputy’s decision to wear these patches, and the implication of his association with an extremist group, is unacceptable and deeply concerning to me."

The deputy has since been placed in administrative leave pending an investigation.

As Voice of OC points out, the Oath Keepers describe themselves as “a non-partisan association of current and formerly serving military, police, and first responders, who pledge to fulfill the oath all military and police take to ‘defend the Constitution against all enemies, foreign and domestic.’ ”

The Three Percenters describe themselves as a national organization of Americans “committed to standing against and exposing corruption and injustice." They deny being anti-government or a "militia."