Donald Trump Jr.: 'I don't think it's too complicated to wear a mask' 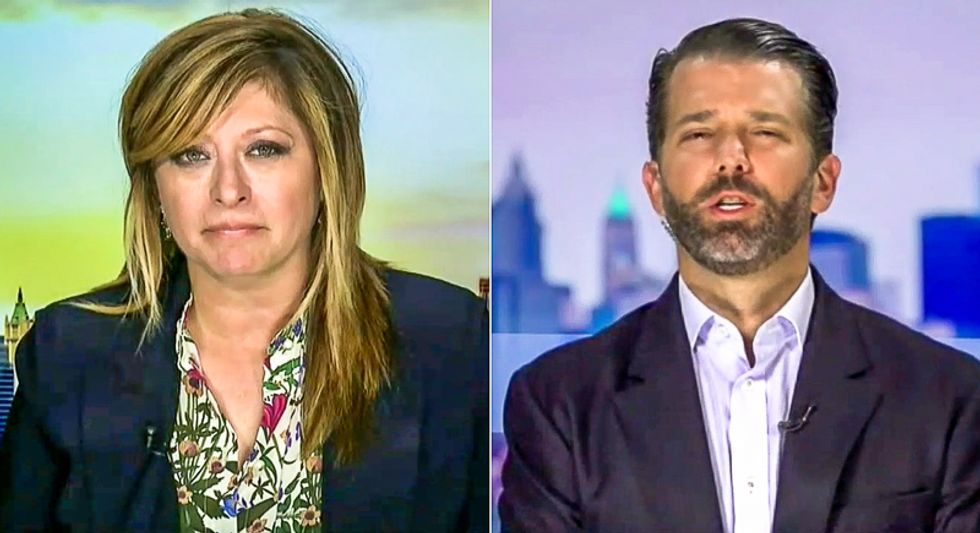 Donald Trump Jr. on Tuesday suggested that attendees of the Republican National Convention will be encouraged to wear masks even though President Donald Trump has refused to do so.

During an interview on Fox Business, host Maria Bartiromo noted that the party's convention will be held in Jacksonville, Florida -- where coronavirus cases are surging.

"We're still two months out from the convention so we have a little bit of time to get everything in order," the president's son opined. "We're going to make sure that everything is done in a safe and appropriate manner."

"You know, I don't think it's too complicated to wear a mask," he continued, "or wash your hands, follow basic hygiene protocols. We're just going to do whatever we can to make sure that the people that are there in attendance as well as the people from the RNC and the campaign are safe, enjoyable and have an awesome time."

Bartiromo also pointed out that presumptive Democratic nominee Joe Biden is besting the president in poll after poll.

Donald Trump Jr., however, said that the polls cannot be believed.

"I'm not entirely buying it," he explained. "I think there is probably a component of it that's accurate because if you look at the coverage of these things, they're trying to blame all on this on President Trump."

According to Trump, the media is trying to "throw blame" on the president for his coronavirus response and the social unrest in the country.

"I also do think there's a large element like [2016] and perhaps greater that because of that response, because of the media reaction, because of some of the craziness that has gone on, between the looting and the rioting and the attacks, people aren't going to be as apt to say, 'I'm voting for Trump,' because they're not sure where someone else is coming from," he said.

Trump added: "The fact is, these days you're not allowed to just be apolitical, you have to be woke. If you're not woke enough, if you just want to stay apolitical, you get cancelled anyway. We've seen that cancel culture become very pervasive throughout society."