Dr. Fauci is concerned the 'anti-science problem' in the United States is putting people at greater risk 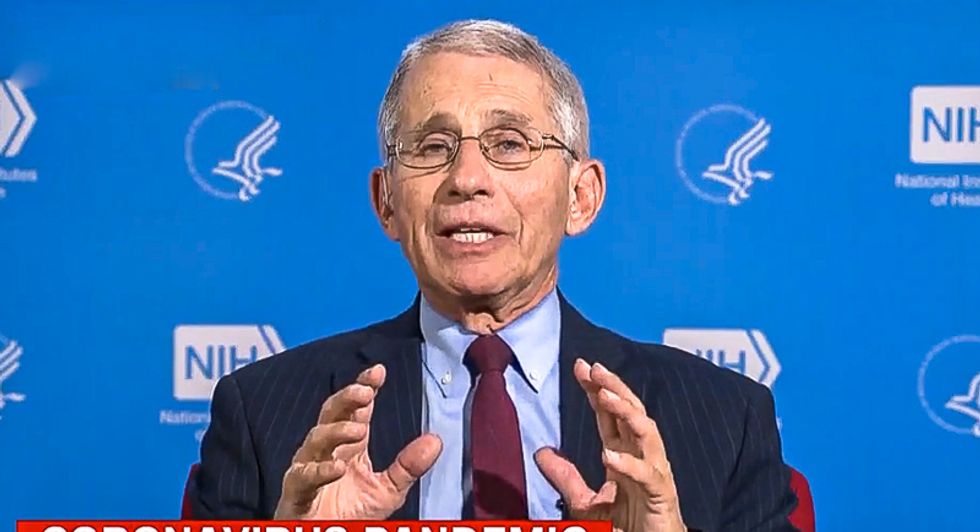 Dr. Anthony Fauci blamed an outbreak of anti-science in the United States for the ever-increasing rise in COVID-19 cases in a new CNN interview.

In the past month, the coronavirus task force has been out of view and they aren't briefing President Donald Trump anymore. At one point he tried to disband it, but reinstated it because of an outcry he said made him realize how "popular" it was.

"One of the problems we face in the United States is that unfortunately, there is a combination of an anti-science bias that people are -- for reasons that sometimes are, you know, inconceivable and not understandable -- they just don't believe science and they don't believe authority," Fauci said.

"So when they see someone up in the White House, which has an air of authority to it, who's talking about science, that there are some people who just don't believe that -- and that's unfortunate because, you know, science is truth," Fauci added.

"It's amazing sometimes the denial there is. It's the same thing that gets people who are anti-vaxxers, who don't want people to get vaccinated, even though the data clearly indicate the safety of vaccines," he went on. "That's really a problem."

Trump has faced off against scientists in the past over vaccines and climate change, but the virus brought a whole different level of science skepticism with Trump endorsing untested drugs that proved to cause heart problems in some patients.

Trump has attacked the Chinese, blaming them for the coronavirus, but Fauci said that they have been instrumental in helping. They published the sequence for the virus on an open database on Jan. 10. It was the following day that the U.S. realized the problem, Fauci said. They began to develop a vaccine candidate on Jan. 15 he said. Trump didn't declare a state of emergency until March 13.

"Sixty-two days later, we had a product that we put into clinical trial, in a Phase I to see if it's safe and does it induce an immune response. That is overwhelmingly the quickest that has ever been done," Fauci said.

"What happens is that in the standard way of developing a vaccine, you don't jump to invest in the next step until you're pretty sure that the step you're in is working," Fauci continued. "Given the fact that we needed to do this as quickly as possible without sacrificing safety or scientific integrity, the federal government partnered with multiple of these companies and said, 'Guess what, we're going to move fast and we're going to assume we're going to be successful. And if we are, we've saved several months. And if we're not, the only thing we've lost is money. But better lose money than lose lives by delaying the vaccine.' So, right now, the initial data from the study showed that. It makes me cautiously optimistic that we can induce a response that would be protective."

Fauci also said that he's concerned people are confused about the reopening and what they should and shouldn't be doing.

"When you give advice about what should you be doing -- should you be out there, should you be shutting down earlier versus later? I mean, people get confused. And they say, 'Wow, you know, we shut down and we caused a great disruption in society. We caused great economic pain, loss of jobs,'" Fauci said.

"But if you look at the data, now that papers have come out literally two days ago, the fact that we shut down when we did and the rest of the world did, has saved hundreds of millions of infections and millions of lives," he continued. "And yet, there are those who say, 'You shut down, you did destructive things by disrupting the economy.' And others say, 'Well, if you save so many infections by shutting down, why didn't you shut down two weeks earlier? You could have saved many more lives.'"

Read the full interview on CNN.com.