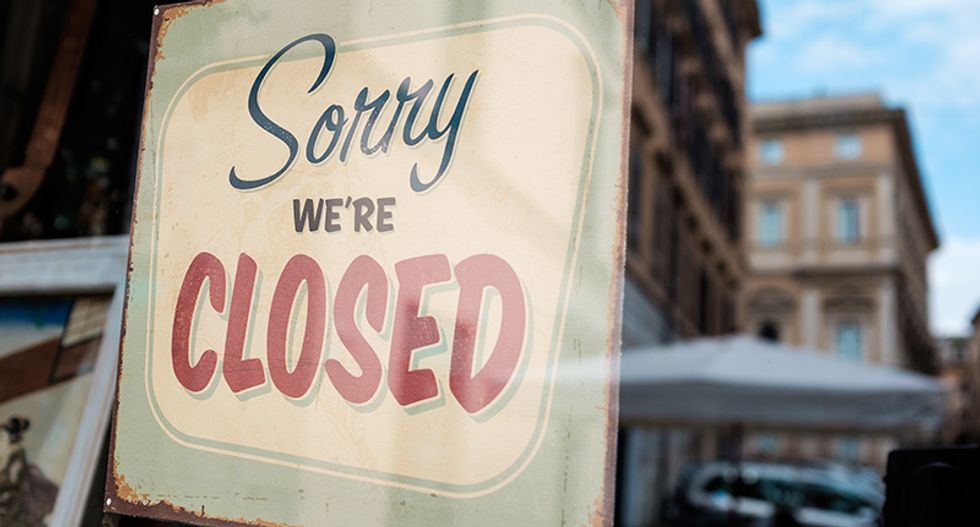 There is a concern that a flood of bankruptcies could be on the horizon, a New York Times report revealed Thursday.

According to the report, more than 6,800 businesses filed for Chapter 11 bankruptcy protection last year, but 2020 is expected to see far more from much larger companies as Trump's slow response to the coronavirus spooked markets.

Hertz, the gym chain 24 Hour Fitness and J. Crew have already filed for Chapter 11 as COVID-19 halted all travel and sent people to work from home. At the same time, a battle between China and Russia over oil sent costs of a barrel of oil plummeting to the lowest level seen in decades. Oil and gas companies in the United States were sent scrambling as it became clear they couldn't make money bidding against the two countries.

"Many are teetering on the edge," said the Times. Oklahoma-based "Chesapeake Energy, once the second-largest natural gas company in the country, is wrestling with about $9 billion in debt. Tailored Brands — the parent of Men’s Wearhouse, Jos. A. Bank and K&G — recently disclosed that it, too, might have to file for bankruptcy protection. So did Weatherford International, an oil field services company that emerged from bankruptcy only in December."

Those who file for Chapter 11 do so to restructure and get the company out of debt if they hope to sell the company, find investors and other tactics. If a plan isn't created, however, it could mean the company would liquidate, putting more people out of work at a time of high unemployment.

"We anticipate that a significant fraction of viable small businesses will be forced to liquidate, causing high and irreversible economic losses,” academic leaders wrote in a letter to Congress. “Workers will lose jobs even in otherwise viable businesses.”

They encouraged Congress to act to help.

"Among their suggestions: increasing budgets to recall retired judges and hire more clerks, and giving companies more time to come up with workable plans to prevent them from being sold off for parts," said the Times.

“Tight deadlines may lead to overly optimistic restructuring plans and subsequent refilings that will congest courts and delay future recoveries,” the experts encouraged.

Even before the pandemic, farmers and ranchers were struggling due to President Donald Trump's trade war with China. Retaliatory tariffs sent countries searching for other supplies for soybeans, beef and pork as well as other things.

"But in many cases, the coronavirus crisis exposed deeper problems, like staggering debts run up by companies whose business models were already struggling to deal with changes in consumer behavior," said the times. "Hertz has been weighed down by debt created in a leveraged buyout more than a decade ago, and added to it with the acquisition of Dollar Thrifty in 2012. As it was battling direct competitors, the ascent of Uber and Lyft further upended the rental-car industry."

As Trump struggles to get a handle on the economy and fix problems, the last thing he needs is an uptick in joblessness as a result of bankrupcies.