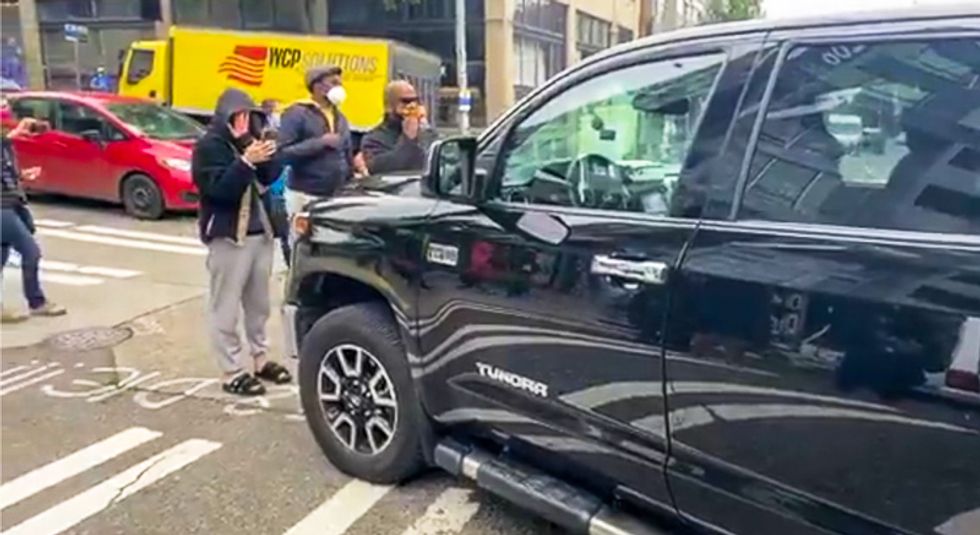 Activists in Seattle said on Monday that a Fox News team hit at least one protester with a vehicle.

The incident was said to have occurred inside Seattle's Capitol Hill Organized Protest (CHOP) zone.

"A Fox News reporter shoved a woman in CHOP," one witness wrote on Twitter. "Protestors surround her to protect and demand an apology from the reporter and in response this individual laughed. They have now abandoned their vehicle."

According to the report, "the reporter and camera man actively drove into a black male protestor" while trying to flee the scene.

Video captured by Converge Media showed a black truck abandoned in a crosswalk in the protest area.

"I came in front of the car and he kept driving!" a protester explained to Converge Media. "He would not stop his car. This is a crosswalk. I'm pressing charges. Assault with a vehicle. That's a deadly weapon. I'm suing Fox News. You're going to pay this Black man."

"While covering the news just outside of Seattle’s CHOP zone this morning, a protestor confronted FOX News Channel correspondent Dan Springer and his crew after overhearing him cancel a live report due to ‘filthy language’ in the background. The protestor started yelling at him and threw a cup of coffee in his face and on his jacket," VP Nancy Harmeyer claimed. "Attempting to de-escalate the situation, the crew returned to their vehicle, which was then surrounded by protestors. Unable to drive away, the crew turned the car off and walked away from the scene. At no point during the situation did the FOX News crew ever physically instigate or retaliate in any way against the protestors.”

Watch the video and read some of the reports below from Twitter.

In trying to flee, the reporter and camera man actively drove into a black male protestor in the sidewalk. Not a good look for @FoxNews.
— Ash Marquez (@Ash Marquez)1593448470.0

#CHOP/#CHAZ protesters are blocking what they claim is a Fox News vehicle from leaving the area. Armed "security" i… https://t.co/iommHpPFvE
— #FightForTrump (@#FightForTrump)1593447884.0

Not sure what happened but there’s arguing and anger outside a Fox News crew car. Some people saying “why did you h… https://t.co/l3vojfZS65
— Lindsey Wasson (@Lindsey Wasson)1593446848.0