Global protests erupt in solidarity with racial justice defenders in US 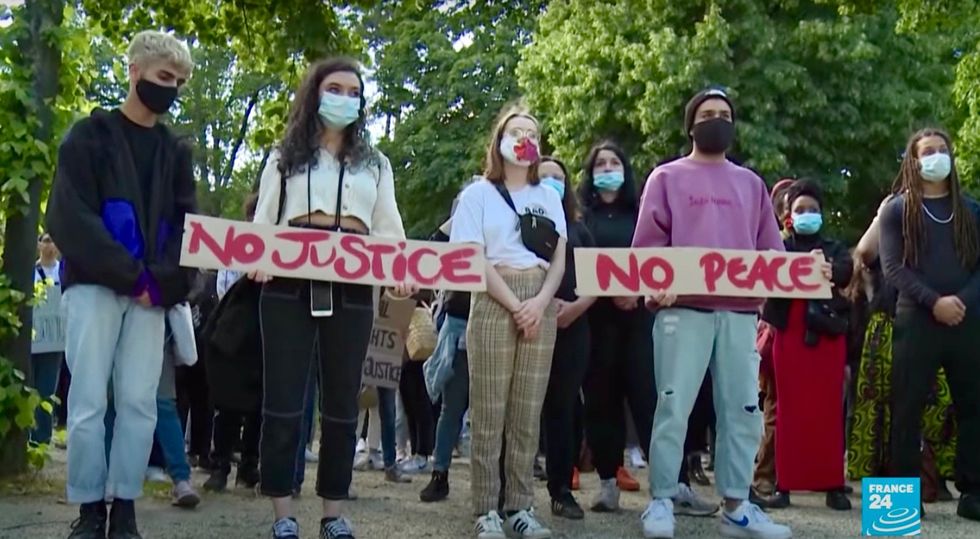 "Police brutality has created a flashpoint for unrest that was already simmering," read an editorial published Monday in The Times of London.

People in a number of international cities violated bans on large gatherings over the weekend to show solidarity with protests against police brutality that have exploded in at least 140 cities across the United States.

Political leaders overseas condemned the killing of Floyd, who died after now-former Minneapolis officer Derek Chauvin pressed his knee onto Floyd's neck for over eight minutes while the man was unarmed and handcuffed and as onlookers pleaded with Chauvin to stop.

An estimated 1,500 people in Berlin marched on Sunday to the ethnically and racially diverse neighborhood of Hermannplatz, a day after more than 2,000 people gathered outside the U.S. embassy where they chanted "Black Lives Matter" and held pictures of Floyd.

Hundreds of demonstrators gathering in front of the US Embassy in Berlin to protest the death of George Floyd https://t.co/M1dBdJLbbB
— Carl Nasman (@Carl Nasman) 1590852119.0

WATCH: Protesters gather outside the US embassy in Berlin to demand justice for George Floyd. https://t.co/gKPlfFfv6s
— NBC News (@NBC News) 1590874219.0

Other spontaneous gatherings were held in Copenhagen, London, Madrid, and Tokyo.

Hundreds of people protested in Tokyo today against racist police violenece. The reason was not only Minneapolis, b… https://t.co/aDlfMj4ukF
— Gregor Wakounig (@Gregor Wakounig) 1590834568.0

Political leaders overseas condemned the killing of Floyd, who died after now-former Minneapolis officer Derek Chauvin pressed his knee onto Floyd's neck for eight minutes while the man was unarmed and handcuffed and as onlookers pleaded with Chauvin to stop.

"Systematic racism caused his death, not just one bad apple in an institution," said Emma Sheerin, a lawmaker with the Irish Sinn Féin party in Northern Ireland. "In the north where our own freedom fighters and civil rights organizations were inspired by the demonstrations of the American civil rights movement of the 1960s, we stand in solidarity with those who struggle for equality."

✊🏻✊🏾✊🏿 Institutionalised discrimination is never right. No one should ever be treated differently because of the… https://t.co/8MpALbmZkq
— Emma Sheerin (@Emma Sheerin) 1591015548.0

In England, officials on Friday denounced the arrest of CNN correspondent Omar Jimenez and his camera crew as they reported on the protests in Minneapolis.

"Journalists all around the world must be free to do their job and hold authorities to account without fear of retribution," Britain's Foreign Office said in a statement.

Michelle Bachelet, the high commissioner for human rights at the United Nations, called on the U.S. to take "serious action" to end police killings of civilians, which happened nearly 1,100 times in 2019.

News agencies around the world registered shocked reactions to the protests which grew last week and over the weekend, spreading to U.S. cities both large and small and marked by law enforcement officers running vehicles into crowds of protesters, pepper spraying Rep. Joyce Beatty (D-Ohio) in Columbus, Ohio; and reportedly severely injuring Linda Tirado, a photojournalist in Minneapolis—among other acts of violence.

The German newspaper Bild wrote that the protests were "scenes like out of a civil war."

The Times of London, meanwhile, expressed no confidence in President Donald Trump's ability to—or interest in—taking steps to quell the anger brought on by Floyd's killing and those of other black civilians. The newspaper criticized Trump's threats of violence toward protesters and predicted he would continue to stoke outrage among his political opponents.

"Politically, identifying enemies puts Mr. Trump into his comfort zone," the Times' leading article read on Monday. "Rather than pouring oil on troubled waters, he has opted for petrol."

"Police brutality has created a flashpoint for unrest that was already simmering," the Times added. "President Trump must change his tone to avoid a violent summer."