GOP chairwoman: African-Americans are at higher risk for COVID-19 so don't complain about a Trump rally 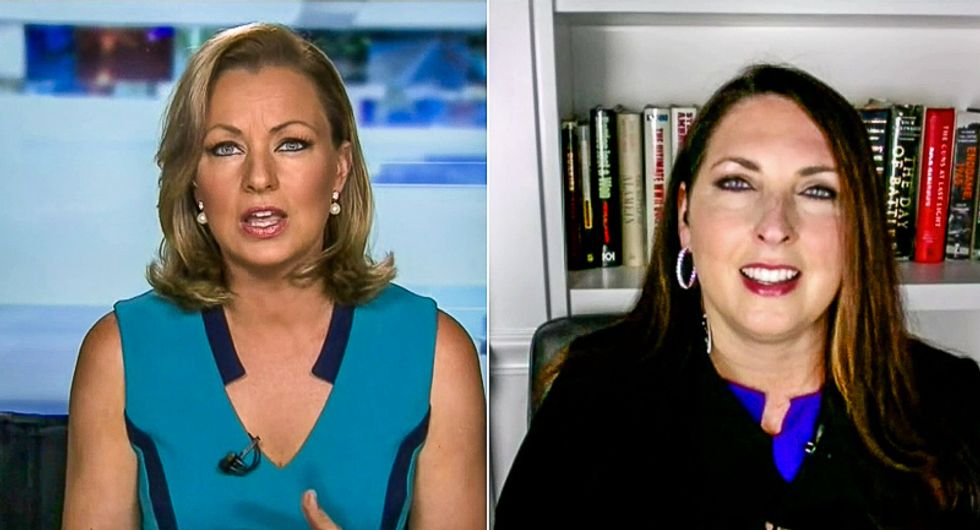 McDaniel spoke to Fox News after Trump claimed on Twitter that 'almost 1,000,000' supporters had registered to attend the rally even though the venue holds 19,000 people.

"Why keep accepting the registrations if it's first come, first serve?" Fox News host Sandra Smith noted. "There's just over 19,000 seats available. What do you plan to do with all these people?"

"There will be events outside, there will be screens," McDaniel explained. "I think they're going to expand into the convention center for more capacity. But yeah, we want everybody to be engaged and come."

"This is obviously happening in COVID-19 times," Smith pointed out. "Oklahoma is seeing an uptick in cases right now. And the editorial board on the major newspaper is saying this morning, wrong time, wrong place, please reconsider."

"We're talking about an uptick in cases not just there but nationwide," the Fox News host added. "Should people wear masks while attending the event?"

"You know the difference between how Republicans have been handling this and Democrats is Democrats are saying we're going to shut down our states, we're not going to allow you to make decisions for yourself and your own health," McDaniel opined. "And I think we're far enough along now that if people have underlying conditions, they're not going to go to a rally like this, people will bring masks if they feel like it's necessary."

The Republican chairwoman complained that African-Americans have been allowed to protest during the pandemic while the Trump campaign receives criticism for holding a rally.

"Thousands and thousands of people -- especially with the African-American community that has been disproportionally affected by this -- and you saw Democrat mayors and Democrat out there with these protesters, not talking about PPE," McDaniel said.

"It's funny that now that we're having a Trump rally and we're bringing people out to celebrate their nominee for their party, all this scrutiny is coming upon this," she remarked.

"Masks are not required at the event?" Smith pressed.

"I'm not planning the event," McDaniel replied. "But I think masks will be optional and people will be able to wear them if they bring them or want them. You know, the American people can make decisions for themselves. We're all pretty informed about COVID at this point."