'Heartbreaking,' say global experts, alarmed at signs US has 'given up' fight to stop COVID-19 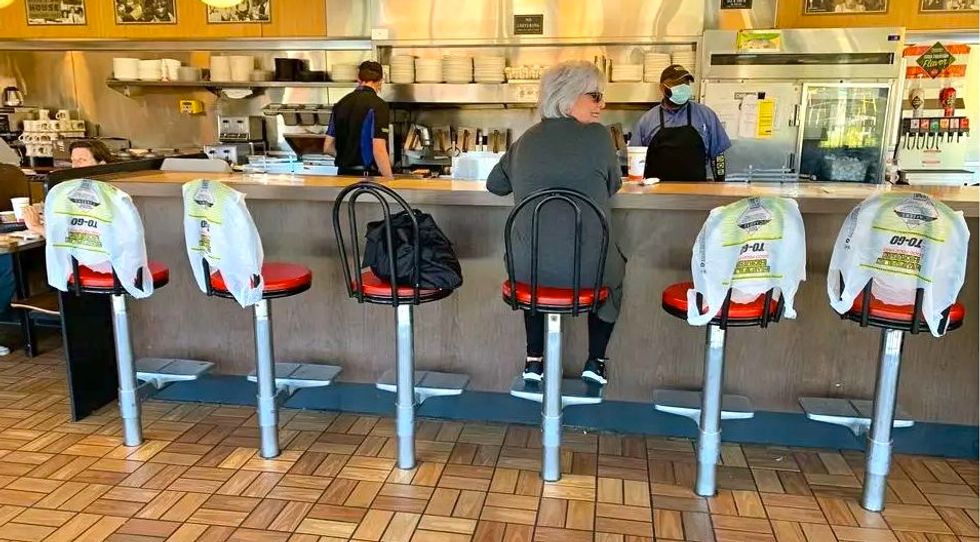 Kim Kaseta waits for her breakfast at the counter of a Waffle House in Atlanta, as Georgia relaxed its coronavirus lockdown restrictions to allow restaurants to provide limited dine-in service Michael Mathes AFP

"I can't imagine what it must be like having to go to work knowing it"s unsafe," said one expert in New Zealand. "It's hard to see how this ends."

Global public health experts are looking on in "alarm and disbelief" as the U.S. economy reopens even as Covid-19 case numbers continue to rise in a number of states, with President Donald Trump signaling he has no intention of calling for more economic shutdowns regardless of the outcome.

As The Washington Post reported Friday, newspapers across Europe have recently published articles and editorials expressing shock at the Trump administration's approach to the pandemic.

"I'm becoming convinced that Covid is not far from taking on the characteristics of gun violence. The U.S. will endure much higher, persistent negative effects from something that other countries have solved; we'll normalize it and convince ourselves nothing can be done."

While images of Americans crowding onto beaches and other public places may have given the international community the impression that the public have grown impatient with social distancing, a survey by the Associated Press last month showed 83% of Americans were concerned lifting lockdown orders too quickly would lead to more coronavirus infections.

But as the country's overall case numbers have risen in recent days, with 10 states this week reporting their highest seven-day average since the pandemic started, Trump and other leaders are pushing Americans to return to work and their normal routines.

"We won't be closing the country again. We won't have to do that,” the president said Wednesday.

Infectious disease specialists around the world—some of whom used U.S. scientists' research to guide their own governments' strategies in confronting the pandemic, pushing them to prepare for long-term lockdowns necessitating robust economic relief packages—are struggling to understand the logic of reopening the country as case numbers grow, the Post reported.

"It really does feel like the U.S. has given up," Siouxsie Wiles, a specialist at University of Auckland in New Zealand, told the Post.

After spending 4% of its GDP on coronavirus relief—which covered all wages for New Zealanders who had to leave work to self-isolate, doubled healthcare spending, and provided subsidies to businesses so they could maintain their payrolls—New Zealand announced in late April that it had effectively eliminated the coronavirus. As of Friday, the country had only three confirmed cases of Covid-19 in the past three weeks.

Other countries where case numbers have dropped significantly in recent weeks, including Canada, Denmark, and Germany, also introduced far-reaching economic relief packages early on in the crisis to enable people to stay at home and avoid overwhelming healthcare systems.

Those spending plans contrast sharply with relief measures in the U.S., which included a one-time direct payment of $1,200 to some Americans and $600 per week on top of regular unemployment benefits. Republicans plan to let the unemployment benefit expire in July, and House Majority Whip James Clyburn (D-S.C.) admitted in May that a paycheck guarantee was the "most efficient" way to protect Americans' jobs and incomes during the crisis, but dismissed Rep. Pramila Jayapal's (D-Wash.) proposal as too expensive.

Posting on Twitter a chart showing the steady, continued growth of Covid-19 cases in the U.S. as millions of Americans were forced to continue reporting to work throughout the crisis compared with plummeting infection rates across Europe, former Obama administration Medicare official Andy Slavitt tweeted, "Don't ever let anyone tell you it wasn't possible."

Devi Sridhar, chair of global public health at the University of Edinburgh, added that poor government responses to the pandemic in the U.S. and the U.K. were inexcusable.

"It's down to absent leadership, incompetence, and a deliberate decision to treat COVID-19 like flu for weeks in Feb and March," Sridhar tweeted.

Wiles expressed horror at the pressure many Americans have felt for weeks to keep reporting to work, regardless of their own risk factors for infection or of case numbers in their communities. Several states last month announced that they would end unemployment benefits for workers who didn't return to their jobs after their industries began reopening, and Ohio's government urged companies to report employees who didn't return.

"I can't imagine what it must be like having to go to work knowing it"s unsafe," Wiles said. "It's hard to see how this ends. There are just going to be more and more people infected, and more and more deaths. It's heartbreaking."

Michael Rozier, a public health and ethics professor at St. Louis University, said the U.S. response to Covid-19 is rapidly beginning to resemble its approach to facing gun violence.

Sadly, I'm becoming convinced that #COVID is not far from taking on the characteristics of #gunviolence. US will en… https://t.co/pHPxyZEDWW
— Michael Rozier (@Michael Rozier)1592517559.0

"The U.S. will endure much higher, persistent negative effects from something that other countries have solved; we'll normalize it and convince ourselves nothing can be done," Rozier tweeted.