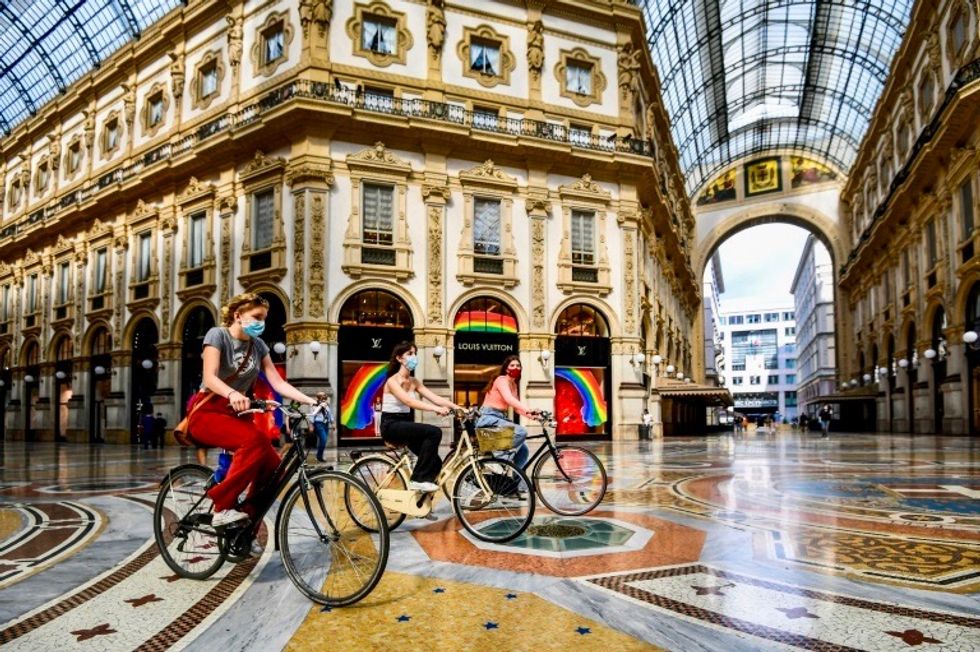 Italy led European nations reopening borders on Wednesday as the continent slowly emerged from quarantines to restart battered economies even as the coronavirus pandemic carved its deadly path through Latin America.

European nations among the hardest hit by the outbreak have mostly flattened out infection curves and turned to the tricky task of balancing economic recovery against the risk of a second wave of cases.

The United States, with the highest death toll, and Latin America have emerged as new centers for infections of COVID-19 that has killed more than 380,000 people worldwide since it first emerged in China late last year.

Across the globe, nations are cautiously reopening schools, beaches and businesses and returning to life after months of quarantine, even as some still face rising cases.

Italy -- the first country badly hammered in Europe -- is leading the way to restart, hoping tourism will revive its recession-hit economy three months after the nation closed.

But with health experts warning over reopening too quickly, some fear foreign visitors may be reluctant to travel.

"I don't think we'll see any foreign tourists really until the end of August or even September. Who's going to come? No one from South America, China or the US," said Mimmo Burgio, a cafe owner near Rome's Colosseum.

International flights to Italy are only expected to resume in three main cities: Milan, Rome and Naples, and some of Italy's neighbors are not yet ready to lift travel restrictions from the country.

Austria said on Wednesday it would scrap virus controls on all land borders, except for Italy, still viewed by some of neighbours as a virus hotspot.

AFP / Filippo MONTEFORTE Air travel is resuming in Italy, and other Eurpean nations are due to follow suit

Germany will also lift its blanket travel warning for European nations from June 15, replacing it with warnings for individual countries.

"This decision raises great hope and expectations but I want to say again: travel warnings are not travel bans, and travel advice is not an invitation to travel," Foreign Minister Heiko Maas cautioned Wednesday.

Belgium will reopen its borders to travelers from the EU, Britain and members of Europe's passport-free travel zone on June 15, while London City Airport will restart domestic service at the end of June followed by international flights in early July.

Britain -- with the second highest death rate in the world after the US at nearly 40,000 fatalities -- is still advising against non-essential travel.

And as Europe reopened, the race to find a vaccine gathered pace.

The continent's four largest economies -- France, Germany, Italy and the Netherlands -- are forming an alliance to speed up production of a vaccine on European soil, Dutch officials said.

Australia has become the latest country to warn of the fallout, saying it would head for its first recession in nearly three decades after the economy shrank in the January-March quarter.

And the World Bank warned this week the world faces "staggeringly large" losses because of the pandemic, with recovery efforts expected to be hampered by a shortage of resources.

While Europe emerges from the darkest days of its outbreak, the virus tightened its grip on Latin America, especially in Brazil, where populist President Jair Bolsonaro opposes lockdown measures.

Brazil has now surpassed 30,000 deaths -- the fourth deadliest outbreak in the world after the US, Britain and Italy.

The figures came even as some Brazilian states began to emerge from weeks of quarantine measures despite warnings from the WHO and epidemiologists it is too soon.

"In the current situation, relaxing the measures is adding gasoline to the fire," Rafael Galliez, an infectious diseases expert, told AFP.

Still, surfers and swimmers streamed back to the beach in Rio de Janeiro as the city eased lockdown measures.

"I think that here, in the water, there is no risk," said Cesar Calmon as he delighted in the waves off Ipanema beach.