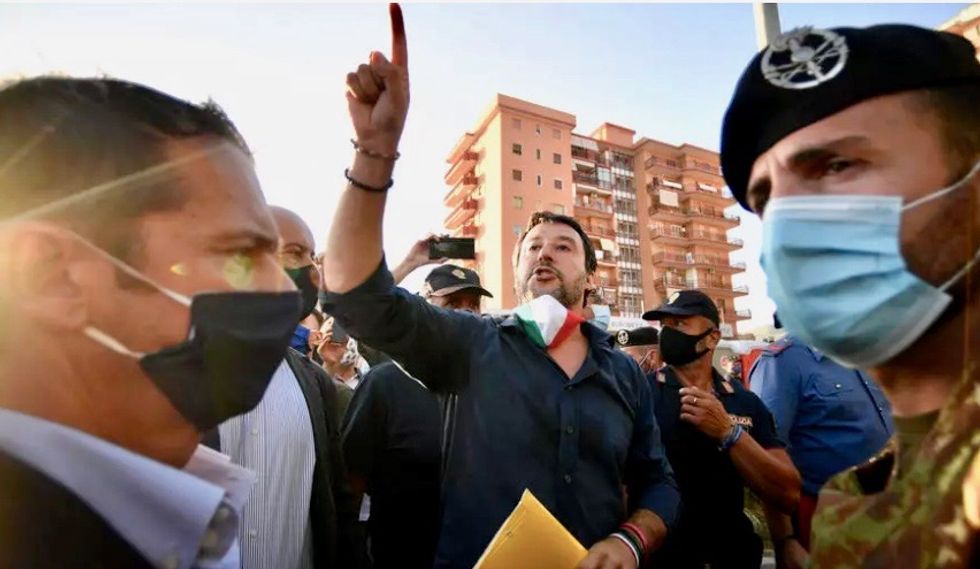 An angry crowd greeted Italy's far-right leader Matteo Salvini during a visit to a town in the Naples region Monday, with some heckling and pelting him with eggs and water.

The confrontation took place when Salvini visited a neighborhood of Mondragone, the scene of tensions last week between some residents and foreign workers, some of whom have been infected by the coronavirus.

When Salvini arrived an hour later than scheduled there was a hostile crowd waiting for him, many of them shouting insults.

Salvini, wearing a face mask in the colors of the Italian flag, quickly lowered it to begin his speech, but could scarcely be heard over the heckling.

"Salvini is worse than the Covid," some shouted, with others calling him a "jackal" or a "clown" and telling him to leave.

Salvini, as he tried to continue his speech from behind a police line, was forced to dodge eggs and water thrown from the crowd.

In brief comments to television crews at the scene, he denounced what he said were agitators who had come in from outside,

"We have to guarantee the rights of Italians, and expel foreigners without papers," he told AFPTV.

"We need to invest more in the Naples region, in resources and in the forces of order," he added.

He left the scene after half an hour, but promised to return at a later date.

Last Friday, riot police had to be sent to the town to restore order.

Around 700 foreign workers, most of them Bulgarian farm laborers, are squatting a group of five buildings there.

They have been under lockdown for a week after 43 people among them tested positive for the coronavirus, while medical staff carry out tests throughout the neighborhood.

But last Thursday, several dozen people broke the quarantine to stage a protest march in the town, leading to scuffles with local people who threw stones at them.

With the collapse of that administration last year and the coronavirus crisis this year his profile -- and his standing in the opinion polls -- has fallen.