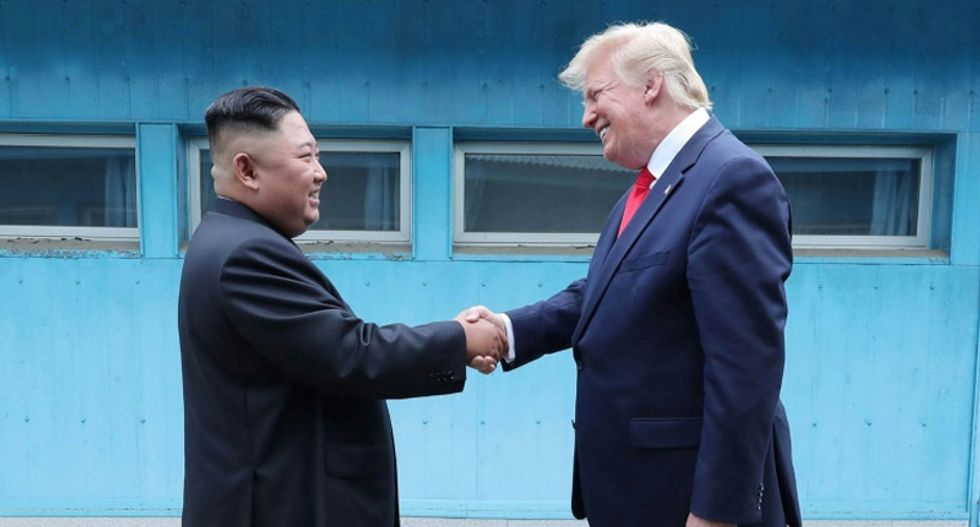 President Donald Trump has been easily swayed by Kim Jong Un's flattery. It was something that former national security adviser John Bolton said Kim likely "gets a kick out of."

According to Bolton, Trump thought that a personal relationship with a leader was just as good as a commitment on a policy issue. The problem is that it didn't manifest in any deal Trump said he could make.

When the foreign policy team was in Singapore, Trump would ask over and over again for information on the number of reporters and photographers that would be present as he crossed the line into North Korea. That was the only thing that Trump was focused on.

"It was high theater," said Bolton.

"Every president has a style, but the idea that just this oleaginous layer of compliments to this brutal dictator would convince him that you could make a deal with Donald Trump, I thought, was both strikingly naive and dangerous," he continued. "He told Kim Jong-Un we would give up what he called the war games on the Korean peninsula. The president didn't seem to understand that the war games, as he called them, were critical to American and South Korean ability to be ready to withstand pressure from North Korea. And to pull down these engagements, these exercises, because they displeased Kim Jong-Un, I just thought was an act of folly."

Martha Raddatz quoted Bolton during the time, saying that he believed in Trump could "size Kim up." She asked if Bolton really believed that.

"Not particularly," he confessed.

"This is the kind of focus that leads you to wonder whether there's an ability to discern what's cosmetic here from what's truly serious," said Bolton.

"And you think what he did there is dangerous?" asked Raddatz.

"I think when you're dealing with the power of nuclear weapons in the hands of an irrational regime, not taking that as seriously as he should have was a big mistake," said Bolton. "Donald Trump got a lot. The U.S. itself got nothing from that. The United States gave much more legitimacy to this dictator, and didn't accomplish anything toward any meaningful discussion on the elimination of their nuclear weapons program."

Bolton claimed he tried to tell Trump how unimportant Kim was, but Trump attacked Bolton instead. "You have a lot of hostility," Bolton recalled Trump saying.