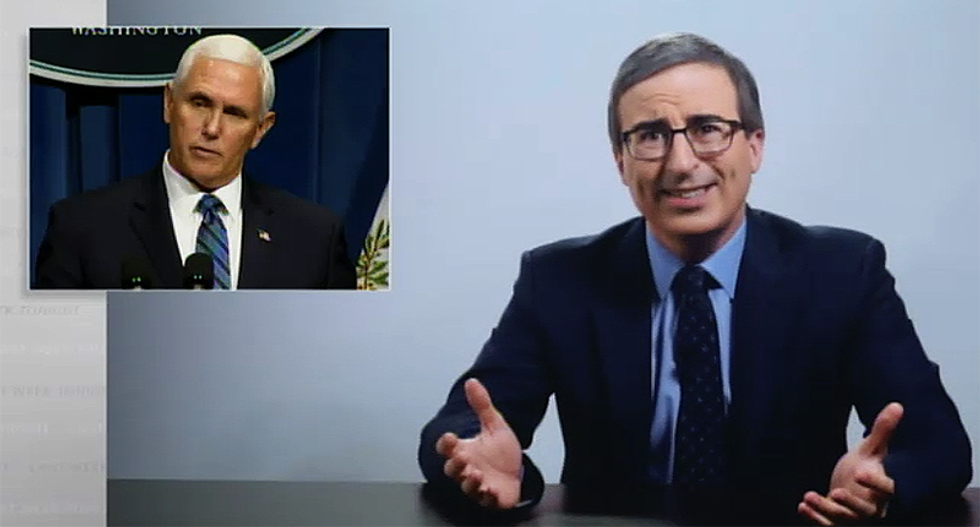 Vice President Mike Pence told the country this week that the United States successfully flattened the curve, and all is well on the coronavirus front. The comment came as President Donald Trump came back to Tulsa, Oklahoma, with eight staffers who had contracted the virus. Ahead of his massive rally last Saturday, Tulsa experienced a huge increase of COVID-19 cases, helping the state to a record number of cases.

"What!?" comedian John Oliver shouted at Pence at the top of his Sunday episode of "Last Week Tonight."

"That's just an open and stupid lie," he said. "That's like instead of saying your dog is on a farm upstate; your dad said, 'your dog owns a farm upstate that has the market cornered in wholesale wheat and grain supplies for the whole of Saratoga County.' That's not true. The dog is dead, and so, by the way, are over 120,000 Americans."

Oliver then attacked Pence for choosing to omit the recommendation to wear a mask to help slow the spread of the virus.

"I will just never understand why or even how Republicans have made not spreading disease into a culture war issue," Oliver said. "Honestly, this was a missed opportunity for them. You could have printed 'Make America Great Again' on a billion red masks and dropped them out of helicopters. People would have worn them! You're not even capitalizing on a natural disaster correctly, you f*cking idiots!"