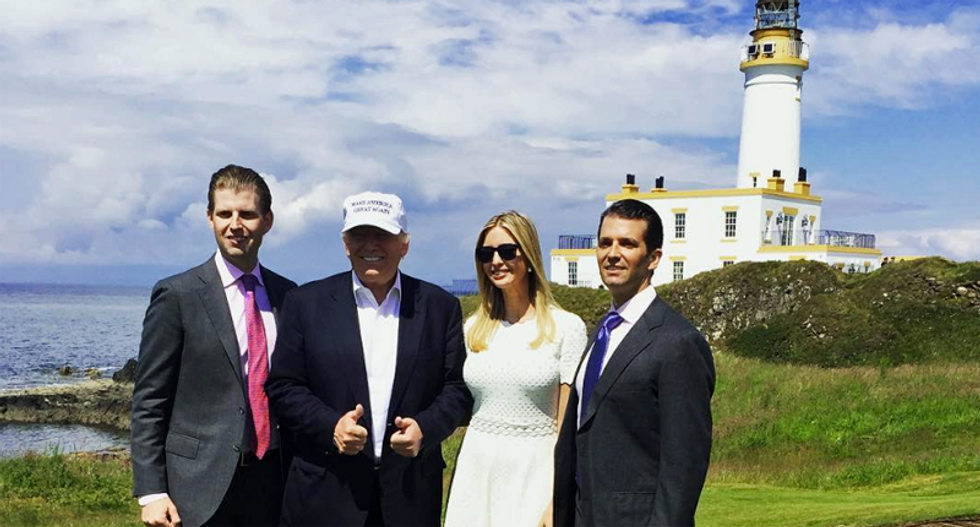 President Donald Trump spent his Father's Day on the golf course, despite having contributed to the DNA of five children. It was a moment that John Oliver felt needed to be captured in a "Now This" segment, which he often shows between larger acts of his Sunday evening show.

In Oliver's montage, he showed a clip from "The Apprentice" in which the then-reality-TV Trump told Ivanka and Donald Trump Jr. that he's talked to them about things that he didn't like about them.

"I told you things that you had to straight out, and you know I was very strong, I don't want to make that a public thing," said Trump.

Don Jr. cut in to say that those things were personal, not business-related.

"My father always reminds us, and we don't really need to be reminded, it's him and then everyone else," said Ivanka Trump in an interview with a late-night host.

During an interview in front of a crowd, Don Jr. explained that he doesn't even want to call his father to "bother him."

Then there was the appearance that the president did with Ivanka, where Wendy Williams asked what they have in common. Ivanka said, "either real estate or golf," Trump said, "sex."

In one Larry King interview with Melania Trump, Mr. Trump said that he wasn't sure if he would even ever see his son Barron, but he certainly wouldn't make the food or change diapers.

But the pièce de résistance came with an old interview with Marla Maples and Trump about Tiffany Trump, where Mr. Trump said that Tiffany had "Marla's legs" and didn't know "if she would have this part of me," pointing to his chest.