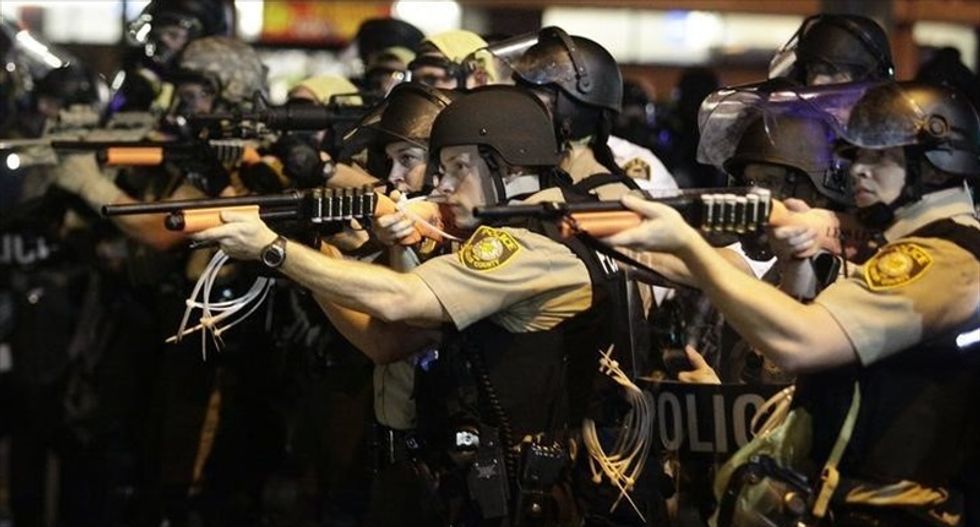 Mark Twain's instruction to curious residents of Freedom Central is, by now, familiar: "If you want to see the dregs of society, go down to the jail and watch the changing of the guard." There is little doubt that the corrections officer who beats and torments the inmates under his supervision would use the phrase "law and order" as a defense for his own lawlessness. Almost any usage of that loaded term in American civic discourse serves as qualification for membership in a diner's club of hell.

Donald Trump, the latest political demagogue to employ the term as a rhetorical bludgeon against peaceful protesters, can look forward to sitting alongside Sen. Joseph McCarthy, former Alabama Gov. George Wallace, Chicago Mayor Richard J. Daley, who ordered police to attack political demonstrators at the 1968 Democratic convention, Richard Nixon and many foreign dictators in the annals of history — and if there is an afterlife, in the middle of the inferno.

Beyond the term's dark history and utility, there is also the rarely discussed fiction it is meant to disguise. In fact, the United States is one of the least lawful societies in the developed world, and that the bulletproof bullies who scream about "law and order" are typically society's most committed enablers of criminality and corruption.

The police lynching of George Floyd provoked widespread denunciation, with even ghouls like Rush Limbaugh and Mitch McConnell condemning the individual officers responsible for the death. What they do not want to acknowledge is the continuation of not only systemic racism within criminal justice, but also a culture of crime. Pundits on the American right delight in reciting the bromide, "a few bad apples," as if they coined it, but they have seemingly forgotten the full cliché: "One bad apple spoils the bunch."

One need look no further than Buffalo, New York, to observe how the mold of a single fruit will soon spread to the rest. When two sadists in uniform shoved an elderly man to the ground for the crime of approaching them, causing him a critical head injury, their fellow cops made no attempt to help the victim. After the city of Buffalo suspended the perpetrators and charged them with assault, 57 officers resigned from the Emergency Response Team in support of their "brothers" whose version of "law and order" includes inflicting random violence on unarmed senior citizens.

The "thin blue line" code of policing that requires silence from police who witness acts of cruelty and illegality from their fellow officers is, among other things, an anti-democratic violation of the U.S. Constitution.

If the press could think beyond the narrow assumptions of political debate, and if the Democratic Party had more rhetorical daring, they might make it clear that Black Lives Matter, a formidable coalition of civil rights organizations, and tens of thousands of outraged citizens filling the streets in protest of police brutality, are on the side of the law. It is their opponents and critics who support and defend mutinous and dangerous breaches of constitutional order. John Adams famously declared that "we are a nation of laws, not men." Police officers, no matter the self-pitying cries of their union captains and the sputtering of their unofficial PR specialists on Fox News, are supposed to be subject to American law just as much as the citizens they purportedly protect.

It is not only cops who are often able to live outside the law. It is also the wealthy and well-connected sociopaths who poison the environment, exploit the poor and manipulate unprincipled political officials.

After the murder of George Floyd provoked civil unrest, Donald Trump and the Republican leaders of Congress bloviated extensively about "law and order." They would prefer their constituents to forget that it was only weeks earlier that they declared any future coronavirus relief package must include the innovative concept known as "corporate immunity."

Paul Bland, the executive director of Public Justice, a national public interest law firm, explains that the Republican plan "would free corporations of any responsibility — even when a corporation's unreasonable and dangerous actions hurt people." Under the system of corporate immunity, big business can violate the rights of its workers and consumers, endanger public safety and increase the risk of sickness and death for anyone in their facilities, without fear of legal penalty. So much for "law and order."

The Trump administration took advantage of the pandemic and mass protests to betray the law and threaten Americans, under the cover of a distracted press. The National Resources Defense Council reported on June 4 that Trump signed an "unprecedented" executive order that "allows industry to skirt foundational environmental laws, such as the National Environmental Policy Act, the Clean Water Act, and the Endangered Species Act, in order to rubber-stamp polluting projects."

The NRDC warns that enabling corporations to bypass review requirements of NEPA will not only have "catastrophic consequences for wildlife," but also, in the words of the organization's president, Gina McCarthy, "harm our health and our communities."

Tinpot tyrant Trump and his demented circle of enablers shout for "law and order," and feigning concern for the damage or injury that might result from unruly protests. Circumvention of environmental regulations that could cause the sickness or death of thousands of people is of no concern.

The First Amendment is also not a priority for the right, for all its whimpering about "freedom of speech." Since the Black Lives Matter demonstrations began, activists have catalogued more than 600 incidents of police beating and harassing protesters without provocation, and almost 300 police attacks against journalists. Trump facilitated one of the most egregious violations of constitutional liberties when he and Attorney General Bill Barr ordered police and National Guard to use tear gas to drive peaceful protesters from Lafayette Square so the president could take a prom photo, Bible in hand like a bouquet, outside of St. John's Episcopal Church.

In his defense, Trump and his supporters have claimed that not all the protesters were peaceful, and that there were criminals among them. They've offered no evidence for this accusation, but their own record indicates that even when there is sufficient evidence for criminal charges, they are willing to look the other way, at least when the offenders are wealthy and friendly to the Trump administration.

The Transactional Records Access Clearinghouse at Syracuse University reports that Justice Department prosecutions of white-collar crime have fallen to their lowest point in 33 years.

David Sklansky, co-director of the Stanford Criminal Justice Center and a former prosecutor, called the Syracuse study "disturbing," and suggested that the decline reflects political priorities more than a drop in the crime rate in corporate boardrooms.

This code of silence around the current free-for-all for white-collar criminals exposes the insincerity of right-wing panic over looting. As Don Henley once put it, "A man with a briefcase can steal more money than any man with a gun."

As Trump has attempted to create chaos in the streets and encouraged a culture of criminality in corporate America, he has also presided over unprecedented corruption in the executive branch of the federal government. The president has personally fired four inspectors general, removing the most effective assurance against misuse of governmental authority and funds in the White House. Far from "draining the swamp," as he promised in his campaign, and in direct contradiction of his "law and order" bluster, Trump has created a sewer of deception, corruption and criminality.

Conservatives display no compunction over their consistent violations of the law. Legal protections of free speech and assembly, the natural environment and worker safety are meaningless to the criminal element of American government. Their flagrant disregard for the Constitution is familiar to the victims of infamous FBI programs like Operation CHAOS and COINTELPRO. The only novelty in America's current days of fury is the widespread popularity of a movement to struggle for true equality under the law.

"We have one beautiful law," Trump recently said in his characteristically bizarre syntax and diction, repeating the word "beautiful." He went on to imply that the "one law and order" serves everyone. His actions, however, have shown that he and his supporters are consistently opposed to law but do indeed insist on order. The don't mean an order under the rule of law, but a social order that maintains their class at the top of the hierarchy, and those they would deem undesirable — the majority of the American people, but especially those who are black, Latino or Native American — fighting for scraps at the bottom. Tax cuts for the wealthy, the elimination of regulatory limits on corporate impulses of avarice and the destruction of all protections for citizens of average means have followed, according to a predictable script of economic control.

If Trump were even remotely sincere about "one beautiful law," he would be out marching in the street alongside Black Lives Matter, rather than threatening its activists and protesters with "vicious dogs." Because the movement now in the streets is the most powerful force in American society currently demanding equal and fair enforcement of the law.

The Washington Post obtained communications between Thomas and Russell Bowers, speaker of the Arizona House, and state Rep. Shawnna Bolick, who served on the House elections committee at the time, showing the wife of U.S. Supreme Court Justice Clarence Thomas arguing that legislators had to intervene to counter baseless fraud claims.