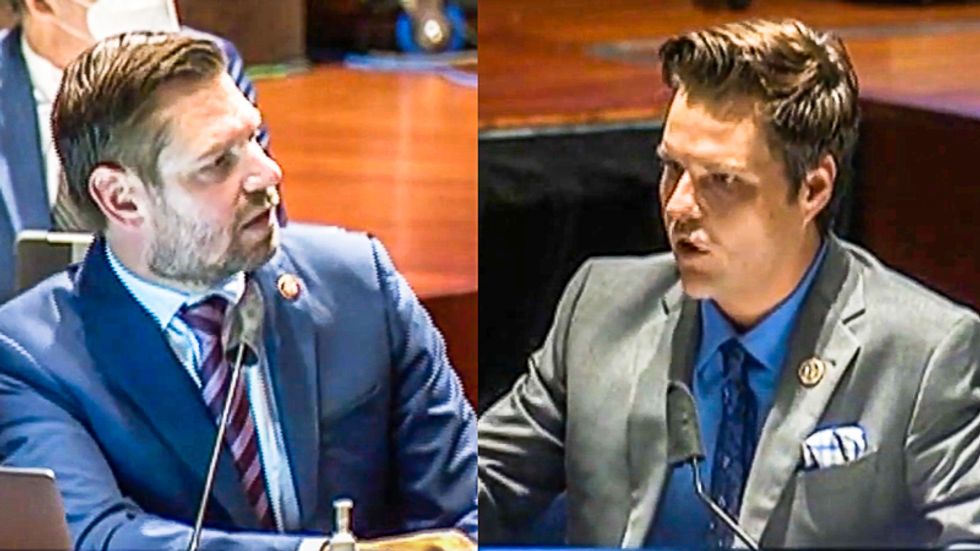 Rep. Eric Swalwell (D-CA) on Wednesday challenged his Republican colleagues to verbally express concern for black lives -- and some of them did.

At a House Judiciary hearing on police reform, Swalwell explained why he supports the Black Lives Matter movement.

"Black lives matter. Period," Swalwell said. "And so I would yield to any of my colleagues on the Republican side who can unequivocally say as we calibrate where we are right now that black lives matter."

"Reclaiming my time," Swalwell interrupted. "Can anyone on the Republican side say unequivocally black lives matter?"

"Unequivocally, all lives matter," Gaetz repeated as Swalwell grimaced. "Why is that a problem to acknowledge?"

"My colleagues on the other side would like to put up a straw man not to have to a conversation that we need to have about race," Swalwell remarked. "We have to have the harder conversation about systemic issues in policing and instead we get this straw man."

At that point, Rep. Louie Gohmert (R-TX) chimed in.

Rep. Jim Jordan (R-OH) used his time to rail against the investigation into Russia's interference in the 2016 U.S. election. He then yielded to Gaetz to address Swalwell's challenge.

"The theatrics of serving us up the question on a political theme seem to be a bit misplaced," he complained. "It would be as if I were willing to yield to any Democrat willing to say that blue lives matter. Right? Not super productive."

"So, I think that if we acknowledge all lives matter," he continued, "that there are definitely problems in our society that we have to solve."

Trump fumes at the media for not repeating his conspiracy theory about 'agitators' on Jan. 6: 'Probably antifa'

President Donald Trump complained that the press does not focus on his conspiracy theories about Jan. 6 during an appearance Wednesday on Lou Dobbs' podcast.

"The are other fears as well for American citizens that come as a result of confused leadership, I'll put it that way," Dobbs said. "The Jan. 6 committee effectively creating political prisoners in this country for the first time."