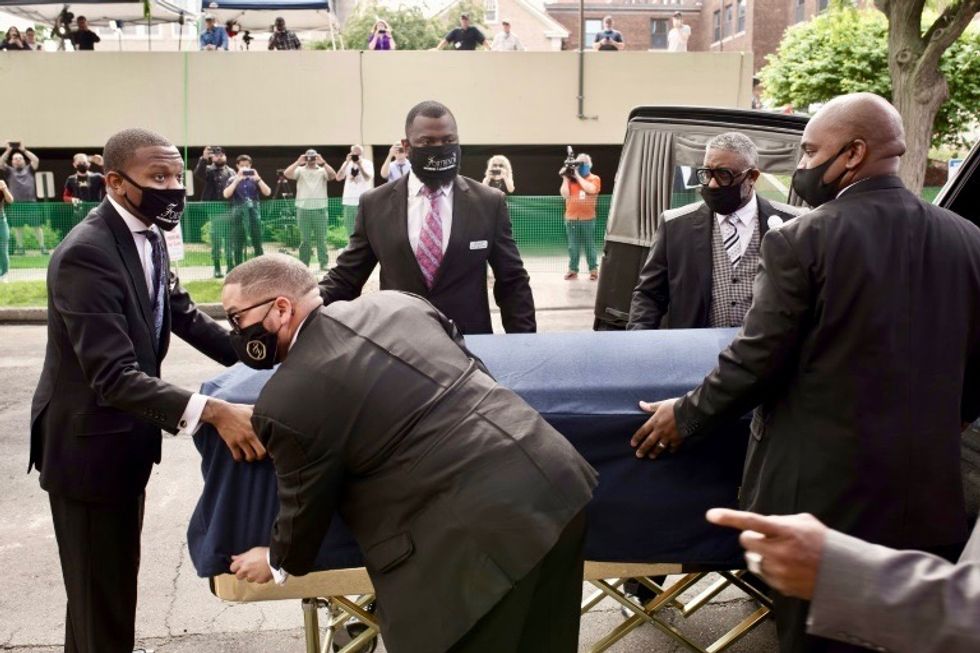 A memorial service was to be held Thursday for George Floyd after more than a week of nationwide protests over the African American's death at the hands of a white police officer.

Led by civil rights activist Al Sharpton, the ceremony will be held in Minneapolis, where Floyd died on May 25 after being detained by police.

A video showing white officer Derek Chauvin kneeling on Floyd's neck for nearly nine minutes as he pleaded for his life triggered rioting in the city and unleashed a nationwide wave of civil unrest unlike any seen in the US since the 1968 assassination of civil rights leader Martin Luther King Jr.

Sharpton, who will give the eulogy for Floyd, met with his family on Wednesday.

"Tomorrow we will lay out how we will mobilize nationally in the name of George Floyd, Ahmaud Arbery, Breonna Taylor, and more," the leading rights activist said on Twitter, referring to a black jogger who was shot dead in February and a black medical worker killed by police in her own apartment in March.

Minnesota prosecutors on Wednesday increased the charges against Chauvin to second-degree murder, roughly akin to manslaughter.

His three colleagues at the scene of Floyd's arrest for allegedly seeking to buy cigarettes with a counterfeit bill were charged with aiding and abetting second-degree murder, and taken into custody.

The arrest of all four officers has been a focus for tens of thousands of protesters who have marched in the streets of dozens of US cities, often defying curfews to condemn police brutality and demand racial justice.

Floyd's family, in a statement thanking protesters, called the arrests and new charges a "bittersweet moment" -- and a "significant step forward on the road to justice."

They urged Americans to continue to "raise their voices for change in peaceful ways."

With a key demand met, protestors nevertheless staged large and mainly peaceful rallies Wednesday calling for deeper change in cities from New York to Los Angeles, hours after the new indictments were announced.

Most of the protests which have swelled in cities across the country since Floyd's death have been peaceful, but some have degenerated into rioting.

GETTY IMAGES NORTH AMERICA/AFP / Stephen Maturen Quincy Mason Floyd (C), son of George Floyd, kneels on June 3, 2020 at the site where his father died in Minneapolis -- his death while in police custody has sparked nationwide protests

US cities including Los Angeles and Washington delayed the start of their curfews by several hours Wednesday after looting and violence had subsided the previous night, while Seattle scrapped its curfew with immediate effect.

But several arrests were made in New York after groups of protesters continued to march in Manhattan and Brooklyn after the city's 8:00 pm curfew had passed.

In Manhattan, protester Brian Clark earlier said the charges were "a good start" but vowed demonstrators would "exercise our right to protest until every black person gets the justice they deserve."

"It's not enough," added fellow demonstrator Elijah B., who did not give his last name.

A large group also protested at the US Capitol in Washington beyond curfew.

Thousands took to the streets in Hollywood and downtown Los Angeles, where Mayor Eric Garcetti vowed to redirect $250 million toward black community health and education from budgets including the police department.

While condemning Floyd's death, President Donald Trump has adopted a tough stance towards the protesters, saying they include many "bad people" and calling on governors to "dominate the streets."

"We need law and order," he repeated on Wednesday.

Pressure on Trump, who has rejected the traditional presidential role of healer in times of crisis, has mounted as his former Pentagon chief Jim Mattis accused the Republican leader of trying to divide America.

Mattis called Trump "the first president in my lifetime who does not try to unite the American people -- does not even pretend to try."

"Instead, he tries to divide us," the retired Marine general said in a blistering statement posted online by The Atlantic.

Trump snapped back on Twitter, calling Mattis "the world's most overrated General."

The US president has raised the possibility of invoking the Insurrection Act to deploy active duty troops to quell unrest.

But Mattis' successor Mark Esper said that option should only be used as "a matter of last resort and only in the most urgent and dire of situations."

"We are not in one of those situations now. I do not support invoking the Insurrection Act," said the current defense secretary.

White House spokeswoman Kayleigh McEnany said Wednesday that the act remains "a tool available" to the president, who is facing a tough reelection battle in November.

"The president wants to protect America's streets," McEnany said, describing the criticism from Mattis as "a self-promotional stunt to appease the DC elite."

Trump meanwhile denied media reports that he was rushed for his safety to the White House bunker while protests raged in the streets outside.

"It was a false report," Trump told Fox News Radio, before saying that he did go into the secure area for an "inspection" and only for a "tiny, little, short period of time."

Reports of Trump taking shelter sparked a wave of online mockery, which is believed to have contributed to his decision on Monday to make a controversial visit to a partly damaged church near the White House.

Police violently dispersed mostly peaceful crowds of protesters to clear a path for Trump, and the photo opportunity was widely condemned.