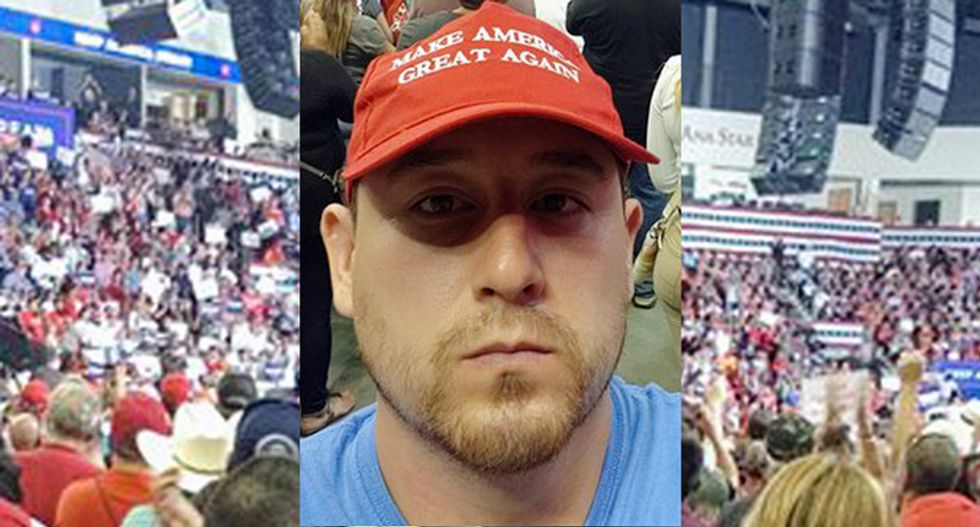 A new video has surfaced that shows Trump supporter Steven Baca shooting an anti-racist protester, Scott Williams, during a fight in Albuquerque, New Mexico on June 15.

The event that ended in near-fatal violence began with a few hundred protesters attempting to remove a statue of Juan de Oñate, a 16th-century Spanish conquistador notorious for brutality against American Indians.

Four members of a heavily armed militia showed up to defend the statue. Members of the Black Lives Matter movement in Albuquerque say the New Mexico Civil Guard has been intimidating them for weeks since protests over the police killing of George Floyd first swept the nation. Antifa activists claim to have evidence that the NMCG includes neo-Confederates, fascist-friendly Proud Boys, Three Percenters, and they talk of “stacking bodies.”

In this volatile mix stepped Steven Baca, a Trump supporter, an official with the local Tea Party movement, and an alternate state delegate to the 2016 Republican National Convention. As protesters hacked away at the base of the statue in downtown Albuquerque, others used ropes to try to pull it down.

Videos show Baca wading into the crowd and assaulting three people unprovoked. After another scuffle, which leaves one woman injured on the ground, protesters force Baca out and some pursue him. According to the police complaint, Baca “doused” the crowd with pepper spray as he continued to retreat.

Multiple people are then seen fighting with Baca, who appears to be hit in the head with a skateboard by Williams. Baca then pulls out a gun. As shots ring out, Williams falls to the ground as people scream.

The short clip of the shooting is taken from a 12-minute video posted on the Facebook page of ABQ RAW, and which was taken down after a few hours. The Raw Story reviewed the longer piece closely.

Within seconds, Baca raises his gun and fires four times as Williams turns and starts to run away.

Street medics quickly arrive to treat Williams. Blood oozes out of two wounds: one near his left clavicle and the other in the middle of his back. On the now-removed video, as medics rolled Williams on his right side and applied compresses to his back and shoulder, someone can be heard saying, “He was shot in the back.”

The militia meanwhile moves in to protect Baca.

A SWAT team and military armored vehicle appear to show up in two minutes. They form a cordon around Williams, pushing away protesters. They also arrest four militiamen without incident and recover a small arsenal: 13 guns and 34 magazines, including from Baca.

Protesters in Albuquerque say the incident reinforces their goal to abolish the police. They say police have done nothing to reduce the atmosphere of violence created by the militia and which may have made Baca bold enough to show up alone with weapons and attack people. Protesters claim before the shooting dozens of calls were made to police because the armed militia was instigating violence but they failed to show up.

This observation was backed up by the New York Times reporter on the scene. Simon Romero tweeted, “I've covered violent street protests in Caracas & Rio. Never felt as threatened as last night in Albuquerque. At one point an armed militia member taunted me for working at the NYT. No police were in sight. Why did authorities cede control of the scene to extremist gunmen?”

After the shooting, protesters were further angered by the police use of potentially deadly flash-bang grenades and tear gas against them. The police claimed it was to allow them to arrest the militiamen.

Similarly, the police complaint fails to mention Baca had attacked protesters despite the widely available videos, and presents him as a victim acting in self-defense.

Sarah, who was among protesters trying to remove the statue, said, “It’s not lost on us this happened in front of the statue of a conquistador. There’s a white nationalist militia, racist police, and a man who was shot. There is a history in America of violent policing from armed militias to slave patrols. In 2020, we were surrounded by armed men who brutalize people in front of the statue of an armed man who brutalized people 400 years ago.”