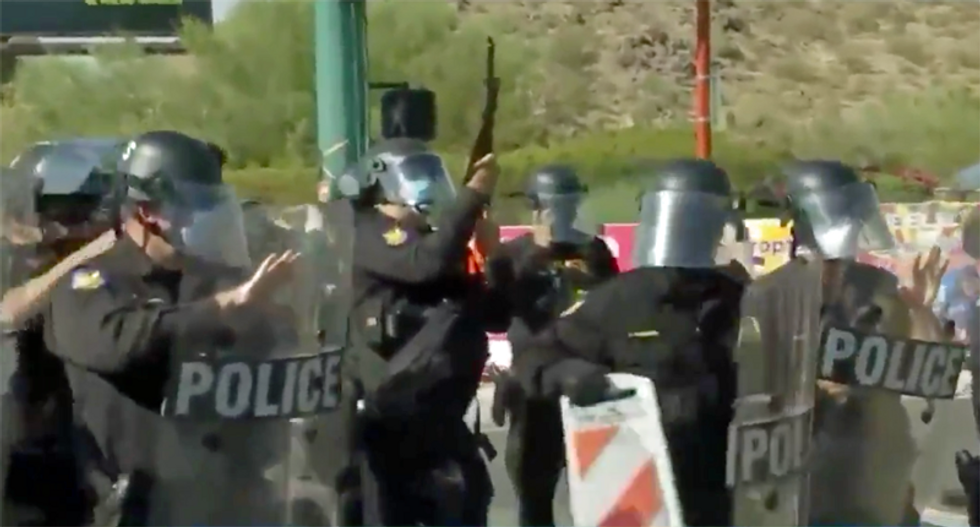 Police in Phoenix gassed protesters outside a church where President Donald Trump was holding a campaign rally despite the COVID-19 pandemic.

"Police corralled protesters into a designated "free-speech zone" marked by metal barricades," AZ Central reports. "Around 4:30 p.m., Phoenix police put on riot gear and began assembling in a line at the intersection of Cake Creek Road and Sharon Drive. They advanced on the crowd, ordering protesters to back up, and suddenly shot flash-bang grenades and a burst of pepper spray into the crowd."

"It was the first time Phoenix police have advanced on and used crowd control measures against protesters since May 31, the first night of Gov. Doug Ducey's curfew to curb protests when police shot gas into a crowd approaching Interstate 10 and arrested more than 200 protesters," AZ Central noted.

Taiwan woman gets life sentence over blaze that killed 46

A Taiwanese woman who set off the island's deadliest fire in decades to get back at her boyfriend escaped the death penalty Friday as the court handed down a life sentence.

Last October's inferno in the southern city of Kaohsiung raged through multiple floors of a dilapidated 13-story apartment block for hours, killing 46 people and injuring 41.

'There is concern among Trump's lawyers that he could be indicted': CNN justice reporter

Former President Donald Trump's attorneys are reportedly worried about his legal exposure in the Department of Justice's probe into his actions leading up to and during the January 6th Capitol riots.

CNN crime and justice reporter Katelyn Polantz on Friday discussed the direct contact made in recent days between the DOJ and Trump's legal team, and she said the conversations revolve around the invocation of executive privilege regarding conversations White House lawyers had with Trump about various actions he wanted to take after he lost the 2020 election to President Joe Biden.

A jury deciding whether to impose the death penalty on the killer of 17 people at a Florida high school visited the still-bloodstained and bullet-scarred building on Thursday where the shooting occurred.