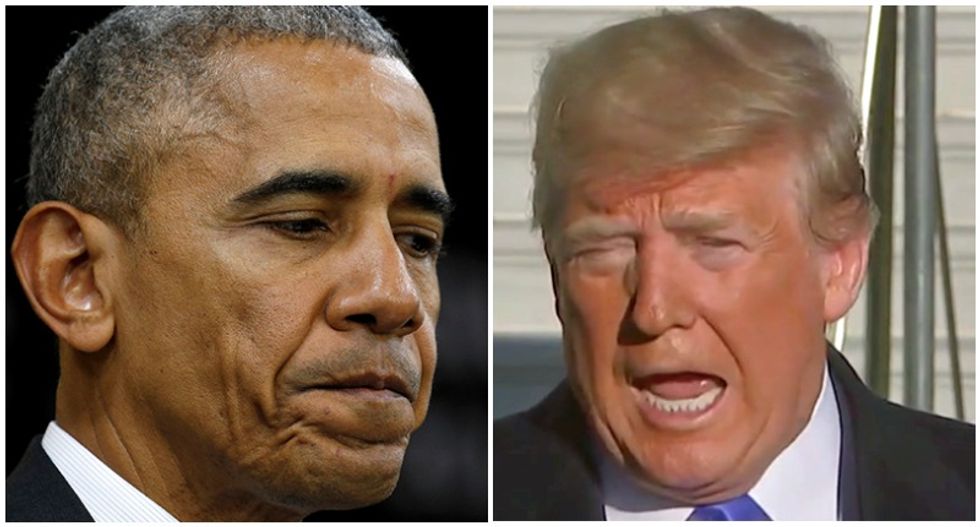 A newsletter from Politico on Thursday morning left a lot of readers scratching their heads.

One section, in particular, about President Donald Trump, former President Barack Obama, unemployment, and racism stood out as both awkwardly phrased and not at all true:

TRUMP SEEMS SINGULARLY FOCUSED on economic indicators like the Dow Jones Industrial Average and the unemployment rate, and seems to have difficulty grappling with intangibles like whether people of color in this country feel valued and included.

IT’S ALMOST THE MIRROR IMAGE of BARACK OBAMA, who tended to downplay hard facts, but focus almost intently on the arc of America.

There are many things to say about these claims. First, it's just not true that Trump is "singularly focused" on economic indicators. His focus is usually erratic, and it jumps around from topic to topic. It's true that he often turns to the pre-pandemic economic data as a sign of his personal success and his contribution to minority communities. But he also ignores inconvenient data, such as when he dismissed the fact that black unemployment rose last month even as unemployment overall fell. And of course, Trump focuses on many other topics well.

For instance, he returned Wednesday to his long-running pattern of support for memorials to leaders of the Confederacy. He has also recently returned to his attacks on the kneeling protests during the national anthem at NFL games. Contrary to Politico's claims, it doesn't actually seem that Trump has "difficulty grappling with intangibles like whether people of color in this country feel valued and included." He can grapple with the idea of inclusion in society, but his instinct is to divide and provide space for white people to feel included, often at the cost of excluding many African-Americans.

In its apology, Politico said: "We deeply regret this wording." It added:

OF COURSE, reams of statistics document discrimination in everything from housing to employment to law enforcement practices, incarceration rates and beyond. Racism also destroys basic ideas that can’t be put into numbers, like the desire and right of every human to be treated with dignity. Trump doesn’t speak to any of that -- he seems to think that if African American employment ticks up by a percentage point, then he deserves accolades. He’s shown much less interest in addressing racial disparities that are woven into most aspects of American life.

It didn't apologize for its comments about Obama, which were bizarre in their own right. It suggested that, in contrast to Trump, Obama would "downplay hard facts" — a laughable claim given the current president's constant lying and intentional disinformation campaigns. It's also just not true that Obama downplayed important facts like the unemployment rate, which he worked assiduously to reduce.

To explain its remarks, Politico wrote:

SOME ALSO flagged our comparison to former President BARACK OBAMA. We were trying to say that while Trump focuses intently on job numbers and statistics, Obama focused much more on the human element in his public comments. This is what Obama said in his June 2015 speech in Charleston, “By recognizing our common humanity by treating every child as important, regardless of the color of their skin or the station into which they were born, and to do what’s necessary to make opportunity real for every American -- by doing that, we express God’s grace.”

Pulling a single quote doesn't really justify the original sweeping claim, relying on a bizarre distinction between "the human element" and statistics, which reflect facts about human life.