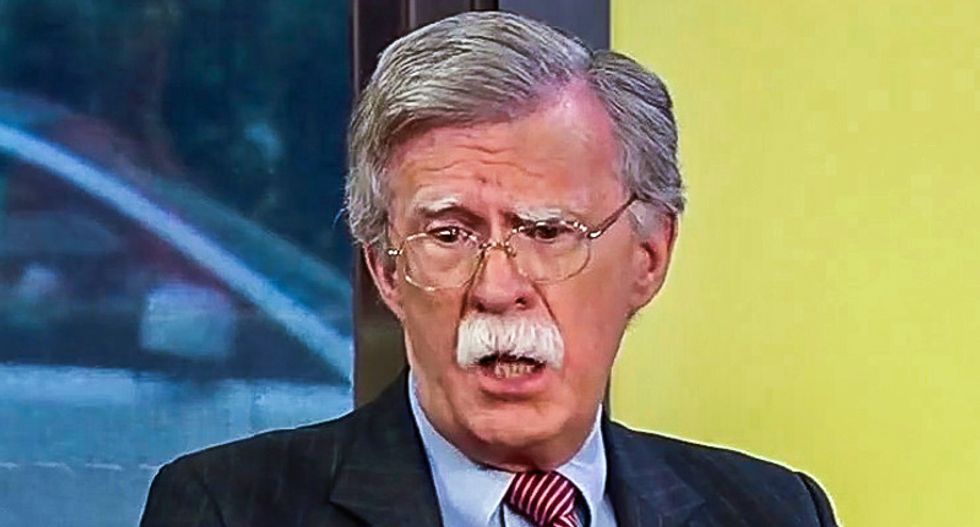 Former Trump National Security Advisor John Bolton was in "the room where it happened," to quote a popular musical – and the title of his new book – but when the time came to tell Congress what he knew, he didn't. Bolton served Trump for 17 months, during critical periods of the Trump presidency, yet made the decision his million-dollar advance and subsequent book deal royalties far outweighed his obligations as a public servant to tell the truth about Trump, when it was most important.

Now that his book is about to come out, Bolton's publisher is dangling juicy details from his time with the President, but many Americans aren't having it – causing his name to be the top trending topic on Twitter.

Some believe had Bolton testified the Senate would have had no choice but to convict. And as some would say, had the Senate convicted Trump, removing him from office, far fewer than 116,000 Americans would have been killed by coronavirus.

Some are also urging Americans to not buy Bolton's book, regardless of its possible bombshell contents, knowing that the most important parts will likely come out in the press – or from publisher Simon & Schuster.

"I am hard-pressed to identify any significant Trump decision during my tenure that wasn't driven by reelection calculations," Bolton writes in the book, as Simon & Schuster's excerpt details.

"In fact, he argues the House committed impeachment malpractice by keeping their prosecution focused narrowly on Ukraine when Trump's Ukraine-like transgressions existed across the full-range of his foreign policy," the excerpt adds:

Bolton was asked by the House to testify for a Trump impeachment investigation deposition, but he refused to do so unless they served him with a subpoena. They did not. Later, Bolton said he would testify before the Senate, again, if he was served with a subpoena – the GOP-controlled Senate had no intention of calling any witnesses, so Bolton was never served.

As many said at the time, he also could have sat down with a reporter and revealed what he knew about Trump, but chose not to. He could have published excerpts from his book, or written an op-ed, or taken any number of actions to help the nation with a president whose actions he clearly did not support. He did not.

Wow, even the promos for Bolton's book are like "he saw the country being corroded from the inside, so he kept his… https://t.co/hbqSkwNUcD
— Robert Maguire (@Robert Maguire)1591975028.0

Fuck you John Bolton. Your country called back in January/February. You had an opportunity to testify. To say under… https://t.co/MX6O0ceX6C
— Joe Walsh (@Joe Walsh)1591971505.0

Perhaps the House would have broadened the impeachment inquiry if Bolton spoke up when it mattered, instead of avoi… https://t.co/I7wiyDQeZm
— Renato Mariotti (@Renato Mariotti)1591972553.0

John Bolton betrayed his country - do not buy his book. Had he spoken up, the Senate may have called additional wit… https://t.co/9eZKZK5P3W
— A Worried Citizen (@A Worried Citizen)1591968986.0

Bolton: Trump is trying to destroy democracy from the inside and is doing criminal things you haven't even heard ab… https://t.co/x89N4vsPlW
— Thor Benson (@Thor Benson)1591975389.0

John Bolton's Book will be highly damaging to Trump. Please make me a promise though. DO NOT buy the book. Jus… https://t.co/wEHmnSPGR6
— Mrs. Krassenstein (@Mrs. Krassenstein)1591974810.0

John Bolton kept important information from the American people when it mattered in the hopes of making some money… https://t.co/uhmK8s1mDX
— Nicholas Grossman (@Nicholas Grossman)1591972256.0

Last Saturday, a much-anticipated Washington rally organized by a no-name TrumpWorld character was a complete bust, with only 50 attendees showing up to voice their support for Jan. 6 Capitol rioters, who were characterized at the event as "political prisoners."

Yet given that this event fell flat, does that mean that right-wing extremism in the post-Jan, 6 era is still a problem? Researchers who monitor online forums and track in-person far-right gatherings say the answer is simple: Yes.

Last week, Special Counsel John Durham secured an indictment against an obscure cyber-lawyer and Democratic insider named Michael Sussmann for allegedly lying to the FBI about who his clients were when he relayed a tip about possible digital communication between the Trump Organization and Russia. Durham was appointed by Donald Trump to delve into the origins of the Trump/Russia investigation. Sussmann's indictment appears to be the culmination of that probe, which has already dragged on for more than two years.

A grand jury only hears the prosecution's side of the story. Hence the truism that a grand jury will indict a ham sandwich. With the five-year statute of limitations running out, Durham sought to indict while the indicting was good. At least now he can say he got a Clinton lawyer. This means a lot to the QAnon base, but it won't mean much to a jury.