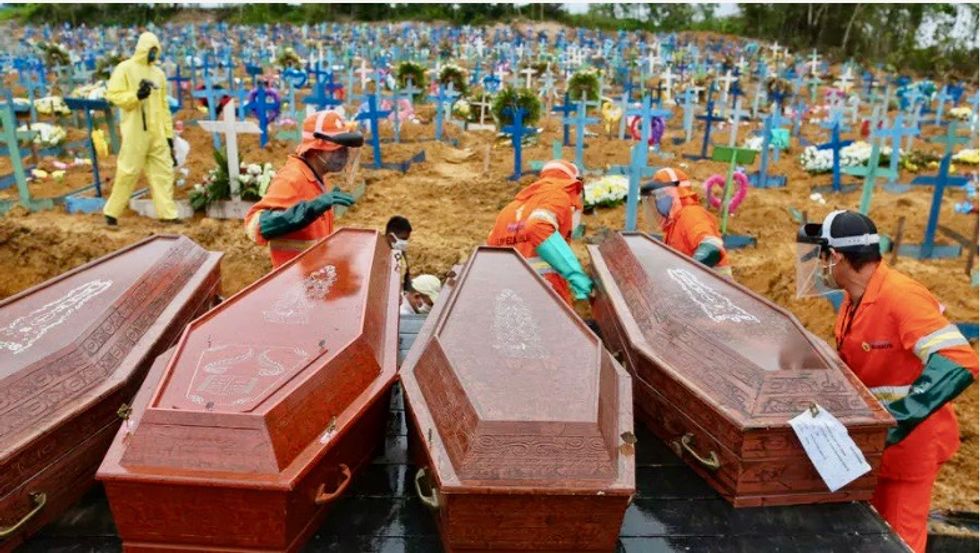 European nations are emerging from months of devastation with some borders re-opening, but South and Central America have become the new hotspots in a crisis that has claimed at least 385,000 lives worldwide.

Mexico on Wednesday announced more than 1,000 coronavirus deaths in a day for the first time, while Brazil reported a record 1,349 daily deaths.

Brazilian President Jair Bolsonaro has staunchly opposed lockdowns but many local authorities have defied him and, with the crisis deepening, a vast section of Bahia state was on Wednesday placed under curfew.

There was more cause for concern in Chile, where the government said it was extending a three-week shutdown of the capital Santiago after a new record for daily deaths.

And in more evidence of the scale of the crisis in Latin America, the journalists' union in Peru said at least 20 reporters had died from the coronavirus.

The outbreak in Peru has been so intense that oxygen tanks needed in hospitals have become scarce, with many lining up to buy them for their loved ones.

AFP / Papri BHATTACHARJEE A worker arranges beds at quarantine centre set up in the Hapania International Fair Complex on the outskirts of Agartala, India

"We haven't found oxygen yet," said Lady Savalla in the capital Lima.

"I'm worried about my mom more than anything else, because she's going to need a lot of oxygen and the hospital doesn't have enough."

Experts have warned that travel restrictions will be needed around the world in some form until a vaccine is found -- and efforts to develop one are gathering pace.

AFP / Jure Makovec People in in Nova Gorica/Gorizia chat across the border fence between Slovenia and Italy, erected due to the Covid19 pandemic

Britain is set to host a major meeting on Thursday, with more than 50 countries as well as powerful individuals such as Bill Gates taking part, to raise money for Gavi, the global vaccine alliance.

Gavi and its partners will launch a financing drive to purchase potential COVID-19 vaccines, scale up their production and support delivery to developing nations.

Tests on one potential vaccine, being developed by Oxford University, will begin on 2,000 health services volunteers in Brazil next week.

The World Health Organization, meanwhile, said Wednesday that it would resume trials of hydroxychloroquine as a potential treatment after doubts were cast on the study that prompted the suspension over safety fears.

US President Donald Trump and Bolsonaro have touted the drug, with Washington sending Brazil two million doses earlier this week.

But a separate study published in the New England Journal of Medicine on Wednesday, however, suggested taking the drug shortly after exposure to the coronavirus does not help prevent infection in a statistically meaningful way.

Many governments are desperate to revive businesses after the economic destruction unleashed by the lockdowns, despite the lack of a viable treatment.

Italy reopened its borders to European travelers on Wednesday, hoping to revive tourism, but a full recovery appeared a long way off for some.

"I don't think we'll see any foreign tourists really until the end of August or even September," said Mimmo Burgio, a cafe owner near Rome's Colosseum. "Who's going to come?"

- Risk of spread at protests -

AFP / Eric BARADAT Protesters hold up their phones during a demonstration over the death of George Floyd, outside the White House in Washington, DC

The United States remains the hardest-hit nation in the world, with 1.85 million infections and more than 107,000 deaths, and there are fears that the ongoing wave of protests in the country over racism and police brutality could fuel the spread of the virus.

Many have said that while they were aware of the danger of infection at the big rallies, the cause was important enough to take the risk.

Cav Manning, a 52-year-old emcee from New York, was among the tens of thousands across America willing to risk infection as he joined a protest in Brooklyn earlier this week.

"What we saw is so disturbing that we've got to be out here right now," he told AFP. "Despite COVID, despite the fact that you might get infected."