'Several' US soldiers were killed by Afghan insurgents that were paid by Russia: report 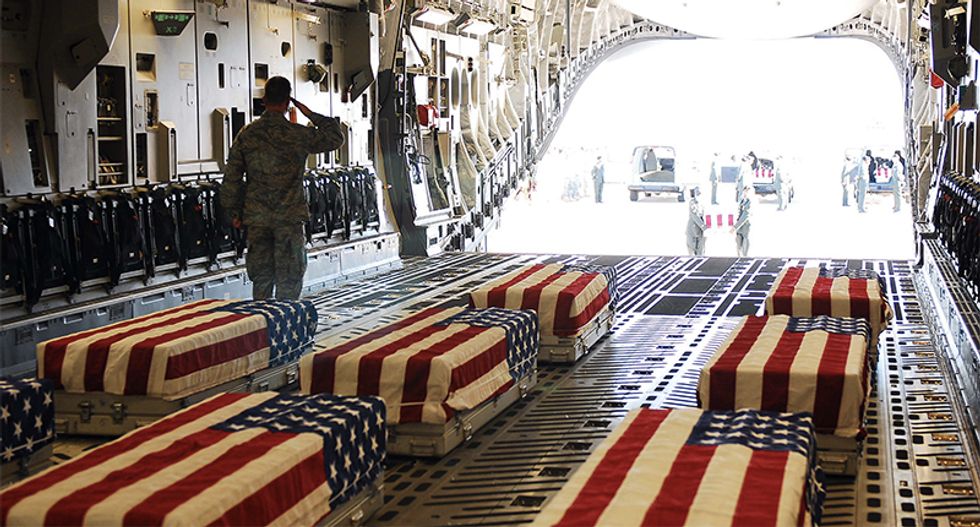 FORT HOOD, Texas- The remains of the Nov. 5 massacre victims at Fort Hood are loaded aboard an aircraft before being flown to Dover Air Force Base, Del. Twelve Soldiers and one civilian were killed Nov. 6 at the post's Soldier Readiness Processing Center. (U.S. Army photo by Sgt. John Ortiz)

The Russian bounties resulted in the deaths of several U.S. service members in Afghanistan, the Washington Post reported Sunday. These deaths were from 2018 and 2019, according to the report so it's unclear what the number of soldiers could be. There were 10 deaths in Afghanistan in 2018 and 16 in 2019, so reporters are trying to gather the exact number of those deaths that resulted in bounty cash from Russia.

"Several people familiar with the matter said it was unclear exactly how many Americans or coalition troops from other countries may have been killed or targeted under the program," said the Post. "U.S. forces in Afghanistan suffered a total of 10 deaths from hostile gunfire or improvised bombs in 2018, and 16 in 2019. Two have been killed this year. In each of those years, several service members were also killed by what are known as “green on blue” hostile incidents by members of Afghan security forces, which are sometimes believed to have been infiltrated by the Taliban."

The intelligence was reportedly given to the U.S. Special Operations forces in Afghanistan and then handed revealed in a high-level meeting at the White House in late March. President Donald Trump has denied he and the VP knew anything about it.

"The meeting led to broader discussions about possible responses to the Russian action, ranging from diplomatic expressions of disapproval and warnings to sanctions, according to two of the people," said the Post. "These people and others who discussed the matter spoke on the condition of anonymity because of its sensitivity."

Both Republicans and Democrats have called for an investigation into why this wasn't known by the president and if it was in the Presidential Daily Briefing, which Trump is known to ignore. House Speaker Nancy Pelosi (D-CA), who is not only a speaker but also is. on the House Intelligence Committee, said that she wasn't briefed on the situation. Sen. Lindsey Graham (R-SC) also said that the Senate Intelligence Committee wasn't briefed either.