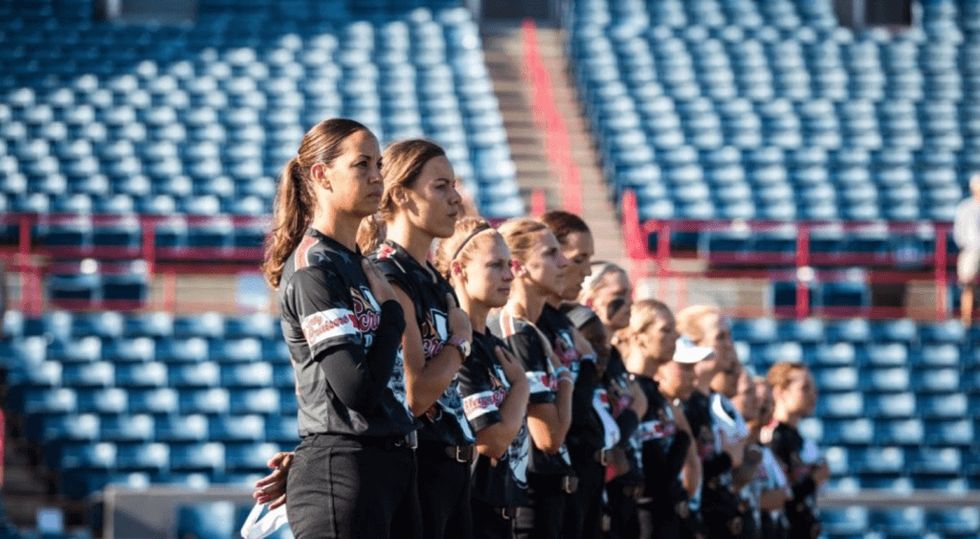 18 professional softball players revolted earlier this week after their general manager used a photo of them standing during the national anthem to bash Black Lives Matter.

The New York Times reports that all members of the Scrap Yard Fast Pitch professional softball team cleaned out their lockers and quit after the team's general manager posted the photo and tagged President Donald Trump to boast about how all of them were standing during opening ceremonies.

Many players reacted angrily to the tweet, which has since been deleted.

"We might be standing in this photo but we SURE AS HELL AREN’T STANDING FOR THIS," player Haylie McCleney wrote in response. "I’m embarrassed. I’m heartbroken. I’m DISGUSTED. @ScrapYardFP I will never be associated with your organization again. BLACK LIVES MATTER."

Cat Osterman, an Olympic gold medalist, tells the Times that she and the other players debated what to do in their locker room after seeing the tweet, and then they all agreed to simply quit the team.

"The more we talked about it, the angrier I got, and I finally just said, ‘I’m done, I’m not going to wear this jersey,’” Osterman said. “We were used as pawns in a political post, and that’s not OK."

GM Connie May tried to calm down the players about her tweet -- but she quickly made them even angrier for telling them that "all lives matter," which players said showed she was oblivious to the entire point of Black Lives Matter protests.

"People got very, very angry," said Kelsey Stewart, one of two Black players on the team.