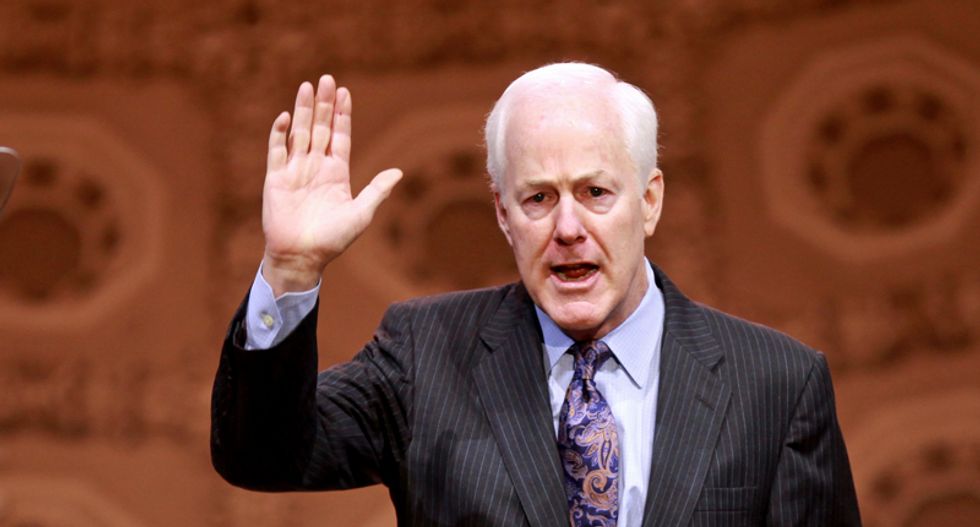 Sen. John Cornyn (R-TX) joined with the only Black Republican senator in an effort to craft a GOP bill reforming the police system. But the move comes only as his favorability numbers dropped and President Donald Trump's polls tightened in Texas.

A June Quinnipiac University Poll of Texas showed a tightening race for Trump, where he is now in a statistical tie with Vice President Joe Biden. Cornyn has an approval rating of just 37 percent compared to a 36 percent disapproval rate.

Cornyn has spent nearly two decades in the Senate, was the attorney general of Texas for four years and the associate justice of the Texas Supreme Court for six years. This is the first time he's proposed reforming the police system in the United States and in his state.

Cornyn could potentially face state Sen. Royce West in the upcoming election, a Black official who has already called the senator out on attacking him using racist stereotypes about African-Americans being "lazy."

Cornyn was also criticized after attacking the Chinese people for the coronavirus, saying that it's because they eat "bats, snakes and dogs."

“China has been the source of a lot of these viruses like SARS, like MERS and swine flu and now the coronavirus,” Cornyn said. “So I think they have a fundamental problem, and I don’t object to geographically identifying where it's coming from.”

In fact, swine flu first came from the United States, MERS was identified in Jordan.

It wasn't long ago that Cornyn was disinvited to give the commencement address at Texas Southern University, an HBCU in his state, after a petition from students and alumni protested the speech because Cornyn voted to confirm Betsy DeVos as education secretary and Jeff Sessions to be attorney general in 2017.

"The petition notes that Cornyn joined with other Republican senators in 2010, during the confirmation hearings of Elena Kagan to the Supreme Court, in attacking the legacy of Supreme Court Justice Thurgood Marshall," reported Inside Higher Ed. "Cornyn said at the time that Marshall had a "judicial philosophy that concerns me." Many court watchers said Republican's focused criticism of Marshall was odd, given that it was Kagan whose nomination was under review, and that Marshall had been dead for 17 years. The Republicans said the comments were relevant because Kagan had been a clerk for Marshall and praised him."

Cornyn tweeted Tuesday that he's "eager to get to work and enact real change."