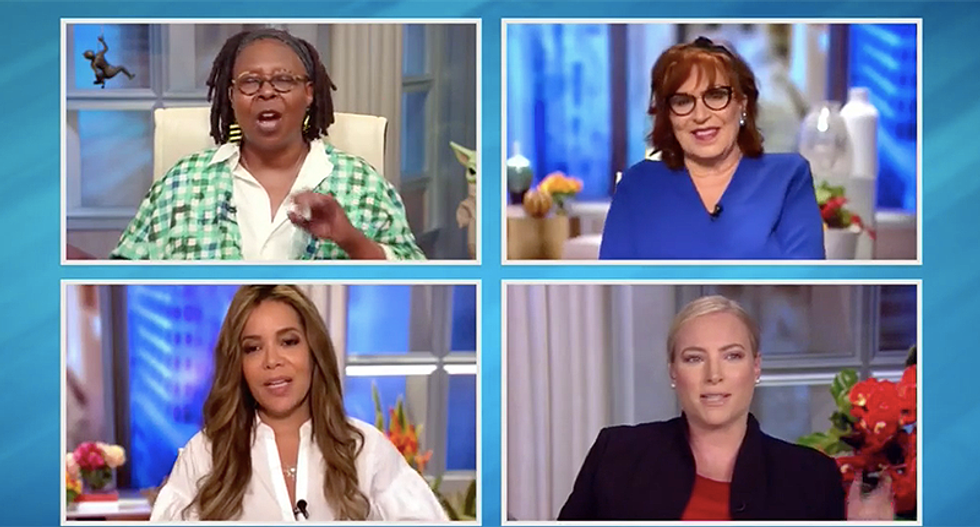 "The View" co-hosts debated the movement to "defund the police," which Meghan McCain took to a hyperbolic conclusion that it means no public safety and anarchy. But co-hosts Sunny Hostin, Joy Behar and Whoopi Goldberg explained that McCain and other conservatives are taking the word "defund" and turning it into taking away any security at all.

As Hostin explained, Camden, New Jersey, they had so many problems with their police that they disbanded the entire department. What that meant is that officers could reapply for jobs, but hiring standards were different, training was different and the whole department was reimagined. She explained that many officers don't want to deal with mental health issues, but that's one of the most frequent calls that police get and they're not trained to handle it.

Behar explained it's another case of conservatives getting caught up with words. She used the example of "pro-life," where when it comes to caring for children after they're born, the pro-life movement isn't interested.

"It's really anti-abortion. Then say it like that," she said.

McCain said that if you're explaining the position then you're losing.

"There's a lot of explaining going on on this," said McCain. "If you mean reform, say reform. If you mean defund, say defund. People are confused. Congresswoman Ilhan Omar called for the complete dismantling of the police department, saying 'It's rotten to its core.' I don't know what explanation you need for this. Joy, You don't like things being weaponized in politics for a term. This is giving Trump a great campaign slogan."

Activists say that for years they've called for "reform" but that reform isn't working. In Minneapolis, police were required to have deescalation training, but it didn't stop George Floyd from being killed while he was handcuffed.

"I understand and hear loud and clear what you're saying," McCain continued. "I've been reading and watching for the past day. I understand there's a lot of people that say reform. Rev. Al Sharpton said this is confusing to people -- excuse me misleading without interpretation. I saw a video of a Minneapolis city councilwoman who said it's a privilege for me to be able to call the police department if someone broke into my house and someone was trying to hurt me. Listen, you guys can spin and say everything you want. Politics at the end of the day is real simple. It's about slogans. Defund the police is a great one for the Trump campaign."

"Wait, wait, wait, I'm gonna talk because I've got something to say," Whoopi said cutting in. "I'm going to explain to Bill Barr, who says there's no systemic racism. Eric Garner and George Floyd couldn't breathe. Breonna Taylor -- police didn't knock. Philando Castile told them, 'I have a gun.' Tamir Rice was 12. If you can't look at that and say, 'We have an issue and we have to sit down and talk about it and figure out how to make the good cops better and get the bad cops out of the way,' no one that I know wants to get rid of the police department. No one."

"Congresswoman Omar does!" McCain shot back.

She went on to ask why when people ask for change and ask to get rid of the bad people, "why does everything start with, 'No we can't?' Why doesn't it start with, 'We see what you're talking about?'"