‘There is a better way’: George W Bush breaks his silence to speak out against ‘tragic failures’ 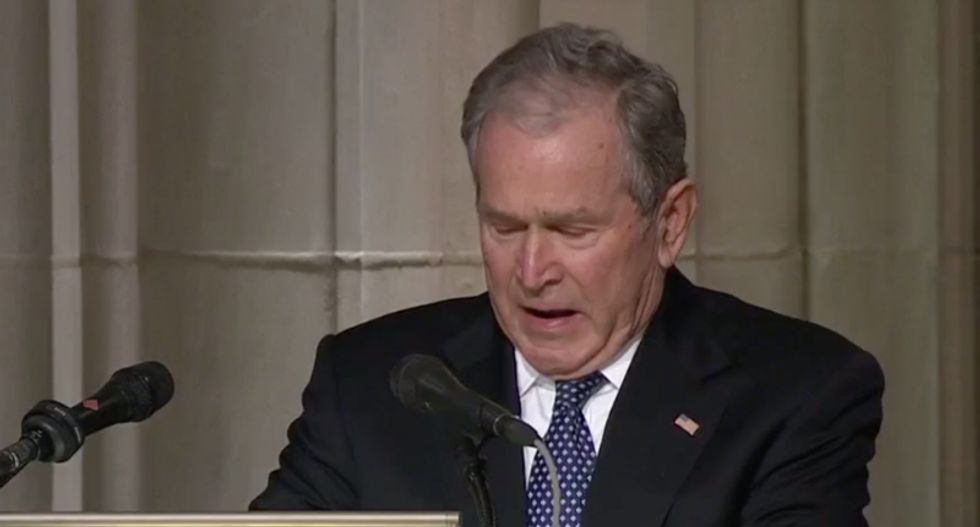 On Tuesday, former President George W. Bush issued a statement on the killing of George Floyd and the ensuing nationwide protests.

"It is time for America to examine our tragic failures — and as we do, we will also see some of our redeeming strengths," wrote Bush. "It remains a shocking failure that many African Americans, especially young African American men, are harassed and threatened in their own country. It is a strength when protesters, protected by responsible law enforcement, march for a better future."

"America's greatest challenge has long been to unite people of very different backgrounds into a single nation of justice and opportunity," wrote Bush. "The doctrine and habits of racial superiority, which once nearly split our country, still threaten our Union ... The heroes of America — from Fredrick Douglass, to Harriet Tubman, to Abraham Lincoln, to Martin Luther King, Jr. — are heroes of unity. Their calling has never been for the fainthearted. They often revealed the nation's disturbing bigotry and exploitation — stains on our character sometimes difficult for the American majority to examine. We can only see the reality of America's need by seeing it through the eyes of the threatened, oppressed, and disenfranchised."

"This will require a consistent, courageous, and creative effort," concluded Bush. "We serve our neighbors best when we try to understand their experience. We love our neighbors as ourselves when we treat them as equals, in both protection and compassion. There is a better way — the way of empathy, and shared commitment, and bold action, and a peace rooted in justice. I am confident that together, Americans will choose the better way."