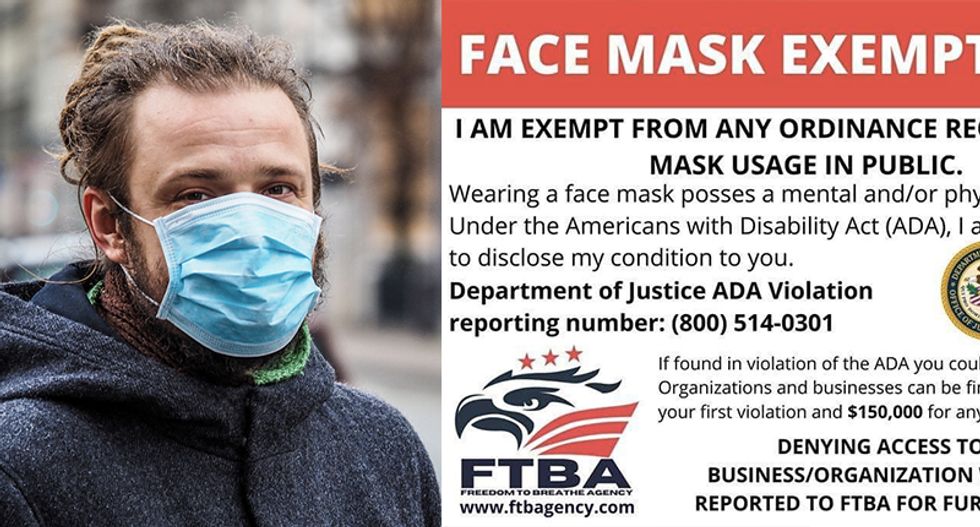 There is no regulation or rule exempting people from wearing masks under the ADA law.

"I am exempt from any ordinance requiring face mask usage in public," the card says at the top.

"Wearing a face mask possesses a mental and/or physical risk to me. Under the Americans with Disabilities Act (ADA), I am not required to disclose my condition to you," it continues.

It then has a Justice Department seal on it and in the lower-left corner claims to be part of the Freedom To Breathe Agency. While their website isn't a .gov address, nor do they claim to be a government agency, it's clear the goal was to appear to be an official entity. It is not. However, the card claims that it will report any violators to the non-government agency as a threat.

"If found in violation of the ADA you could face steep penalties. Organizations and businesses can be fined up to $75,000 for your first violation and $150,000 for any subsequent violations," the card also claims. It's true, but not wearing a mask doesn't fall under the ADA. Stupidity is also not covered under the ADA.

"We are a movement of proud American citizens who are dedicated to protecting their freedom and liberty," the site says. They aren't selling the card at the site, only hats and coffee mugs. Their Facebook group falsely claims "Wearing a mask is an unhealthy obstruction of oxygen flow that can lead to hypoxemia and hypoxia, can permanently damage the brain, lungs, heart and about any organ. We must protect our birth right (sic) to breathe. This is NOT negotiable. FTBA is an agency designed to stop face mask orders from spreading nationwide and globally."

The County of San Luis Obispo Public Health Department is already warning residents in their county that cards claiming to exempt the holder from California’s face covering ordinance are fraudulent and not endorsed by the state, local, or U.S. government, said the New Times.

You can see a copy of the card below: