'This is incredible': Enormous crowds flood streets across US demanding end to police brutality and justice for George Floyd 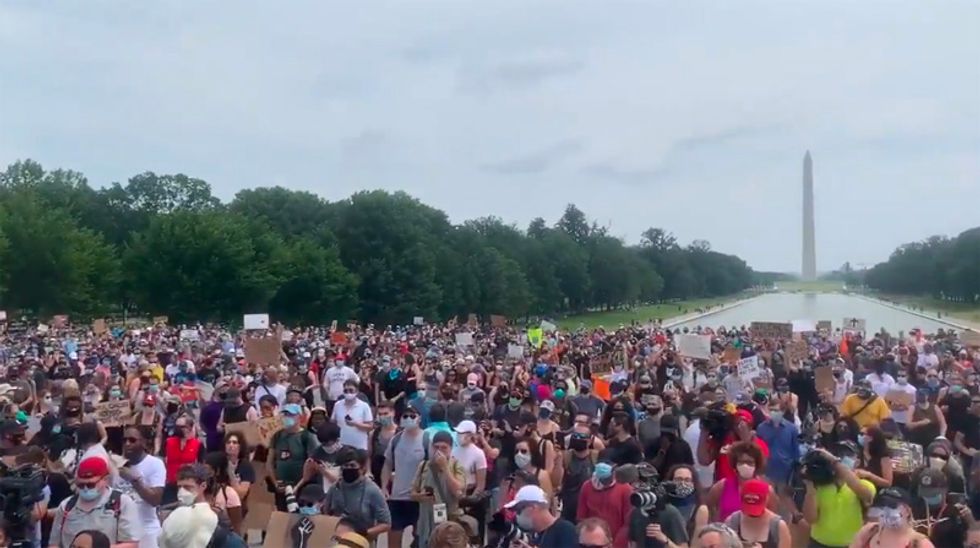 Hundreds of thousands of people across the United States—and, in stunning displays of solidarity, around the world—poured into the streets Saturday demanding an end to police brutality and racial injustice in the largest day of demonstrations since the killing of George Floyd at the hands of Minneapolis officers last week.

Enormous and diverse crowds of demonstrators marched in the streets of Washington, D.C., Philadelphia, Chicago, and other major cities in a striking display of non-violent mass action. Participants in the historic demonstrations voiced hope that the remarkable energy behind the protests can be transformed into a sustained movement for change.

Saturday marked the 12th consecutive day of nationwide demonstrations, which have grown exponentially even in the face of vicious and ongoing police repression, mass arrests, and military intimidation tactics ordered by President Donald Trump.

"This is incredible," tweeted one observer in response to the massive demonstration in Philadelphia, where tens of thousands of people filled Benjamin Franklin Parkway.

Police estimated that at least 30,000 people rallied in Chicago, and thousands more marched and rallied in the nation's capital.

As protests kicked off around the nation, Floyd's friends and family gathered for a private memorial service Saturday near Fayetteville, North Carolina, the place of Floyd's birth.

Hundreds of mourners lined up outside Cape Fear Conference B Church for a public viewing ahead of the service.

"It's important that we all keep coming out until things change," said 25-year-old Taylor Guary.

In Minneapolis, near the site of Floyd's death, thousands of people took part in a march demanding that Mayor Jacob Frey immediately begin defunding the city's police department.

"We need to completely dismantle the Minneapolis Police Department," Rep. Ilhan Omar (D-Minn.) said during a rally in Minneapolis Saturday afternoon. "We don't want your damn reforms... This department is inherently beyond reform."