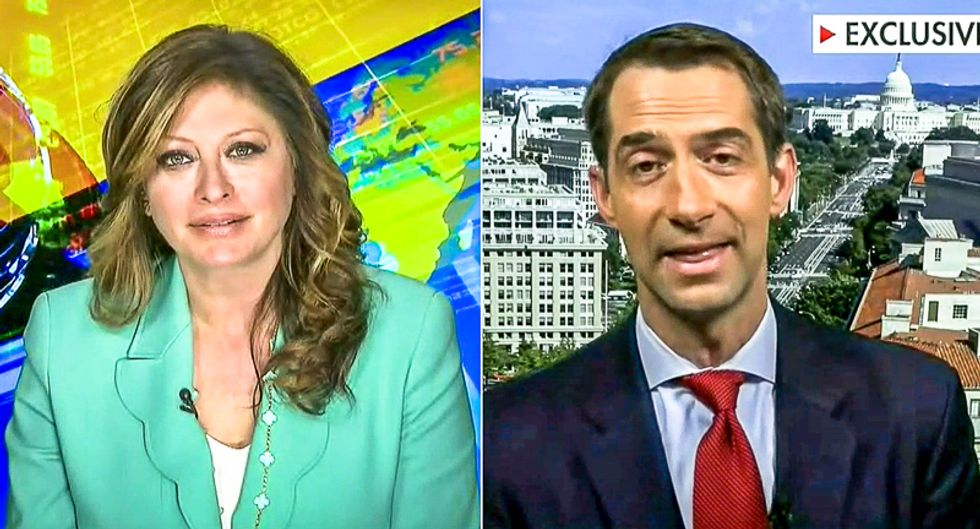 In a column for the Times last week titled "Send In the Troops," Cotton said that the federal government should display "an overwhelming show of force to disperse, detain and ultimately deter lawbreakers."

The paper later apologized for running the op-ed, noting that "the essay fell short of our standards and should not have been published."

While speaking to Fox News host Maria Bartiromo on Sunday, Cotton lashed out at the Times.

"I will say my op-ed didn't meet the Times standards, it far exceeded their standard," Cotton said, "which is usually sophomoric, left-wing drivel."

"Last weekend, we saw riots, looting, really insurrection on our streets," he continued. "In Washington, D.C., a famous church was torched, memorials were desecrated, stores were looted. And I said simply last Monday that if the local police are overwhelmed by the numbers of these insurrectionists, if they need support from the National Guard or -- if necessary as a last resort -- federal troops under the Insurrection Act then that's exactly what has to happen."

According to Cotton, The New York Times "surrendered to a woke child mob from their own newsroom that apparently gets triggered if they're presented with any opinion contrary to their own."

Bartiromo noted that the Times has also published op-eds by the Taliban and Adolf Hitler over the decades.