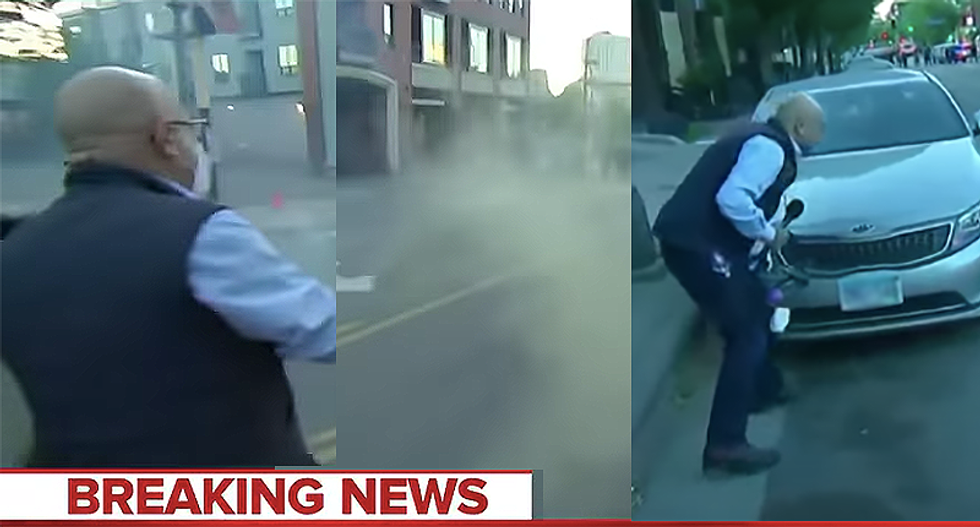 California political consultant Max Rexroad asked the question Monday how difficult it can possibly be to leave the press alone as they cover the protests.

The question comes as the Press Freedom Tracker reported "at least 36 reports of a journalist being shot at with projectiles (rubber bullets, tear gas canisters, pepper balls, etc) by police. Almost all reporters have posted proof in the form of after-the-fact photos. But many have been caught on video."

The New York Times cited cases of police attacks on reporters. One, in particular, was a clash between Pulitzer Prize-winning photojournalist Barbara Davidson, who covered protests near The Grove shopping mall in Los Angeles.

Police told her to move, she showed him her press credentials, but he said he didn't care and she had to leave the area.

“Sir, I am a journalist covering this,” Davidson told him.

She then turned to walk away when the officer shoved her in the back. It caused her to trip and hit her head against a fire hydrant. She said the only reason she wasn't hurt is because she was wearing a helmet she got while buying skateboarding equipment for her nephew.

“This story, in particular, it seems journalists are really being targeted by the police,” Davidson told the Times. “That’s not something I have experienced before to this degree.”

Over the weekend, MSNBC host Ali Velshi was shot at with rubber bullets. When he returned to report the following day, he was then teargassed by police.

"They just came in and started shooting," he reported. Velshi was then shot in the leg.

It was one more of the same after Minnesota State Patrol officers arrested a Black CNN reporter while he was live on air with the morning show "New Day." The white camera crew tried to explain that he was a reporter, but police didn't care and handcuffed him. A move by the governor ensured the CNN reporter was able to get back to work that day.

"That same day, a TV reporter in Louisville, KY, was hit by a pepper ball by an officer who appeared to be aiming at her while she covered the protest on live television," the Times reported.

Denver Post photographer Hyoung Chang was at the statehouse on Thursday last week taking photos of the protests. His press badge was clearly around his neck. that evening, when police began firing pepper balls to break up the crowd "one police officer started pointing at me and started to shoot,” he said.

He was hit with something in his chest, then his elbow and part of his press card was blown off, the Times said.

“I was staying in the same spot,” Chang said, noting that he'd been standing by police most of the day with his camera and equipment. “I think they know I’m a photographer.”

“I’ve really never seen anything like this,” The Times quoted professor Ellen Shearer, from the Medill School of Journalism at Northwestern University. “The president has called the news media ‘the enemy of the people.’ I think all of that has taken a toll.”

During protests like these, the only source of information on the ground that Americans have comes from the media and those on the ground uploading videos and photos. Taking out the press is the first step in trying to stop transparency and accountability.