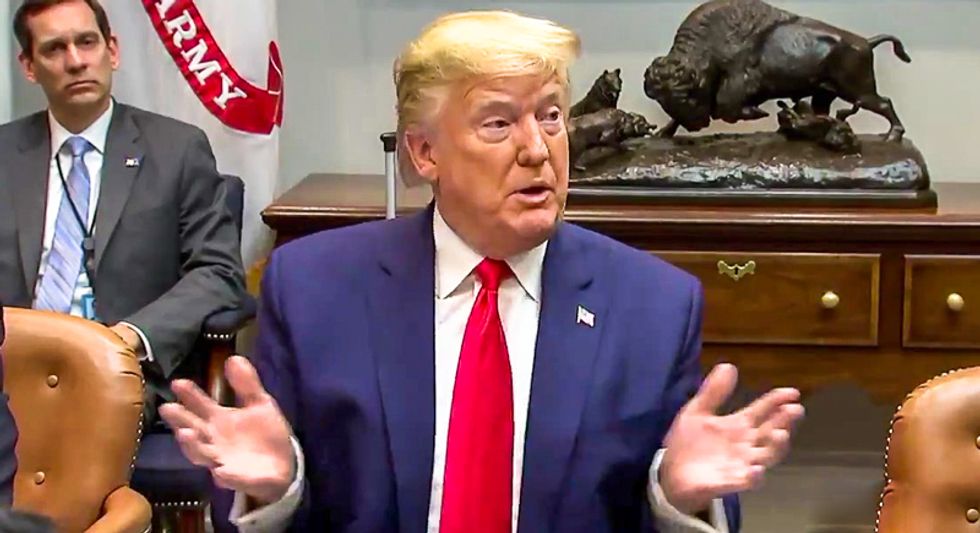 President Donald Trump on Wednesday insisted that fear of protesters did not prompt him to be ushered into a White House bunker. Instead, the president said that he visited the facility for an "inspection."

During a Fox News radio interview with host Brian Kilmeade, Trump again threatened to use military forces against protesters.

“If they don’t get their act straightened out I will solve it. I’ll solve it fast,” he said.

The president also pushed back against the narrative that he was "hiding in a White House bunker" as protesters demonstrated outside.

"They said it would be a good time to go down and take a look because maybe sometime you’re going to need it," the president said, adding that the visit was more of an "inspection."

According to reports, Secret Service "rushed" the president into a bunker on Friday as protests over the death of George Floyd grew.

Read some of the reports from Trump's interview below.

Trump says he went down into the bunker only "for inspection." "It was during the day," he insists, not during nighttime protests.
— Steven Portnoy (@Steven Portnoy)1591191649.0

President Trump tells Brian Kilmeade it was a false report that he was taken to the underground bunker amid protest… https://t.co/ocCtBVKSzF
— Kaitlan Collins (@Kaitlan Collins)1591191691.0

Trump just claimed on Fox radio he went to the underground bunker "for an inspection." He claims he was there "duri… https://t.co/aA8TchidPu
— Jeremy Diamond (@Jeremy Diamond)1591191835.0